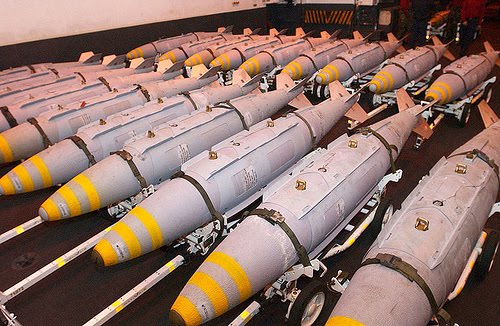 The media has whipped itself into a speculative frenzy after a recent “leak” from the Obama administration. A Newsweek exclusive story, released on September 25th, revealed that President Obama secretly authorized the sale of bunker busting bombs to Israel. These bombs are an important asset in the strategy of nuclear deterrence, because they are able to penetrate targets buried underground (hence their name “bunker busters”). This news isn’t particularly surprising given the United States’ close relations with Israel. What is odd is that the U.S. has been transferring these bombs to Israel since 2009. In light of recent events, was this secret information really just an unauthorized tip-off by some insider? Or was it strategically “released” to the public but made to look like a leak? The timing of the affair seems to suggest the latter.

One explanation for the sudden acknowledgement of the bombs sale is the recent news about Iran’s nuclear facilities. The U.S. boasts a long history of deterring Iran’s nuclear capacity. In 2010 the U.S. used a computer worm named Stuxnet to cripple one-fifth of the Iran’s working centrifuges and briefly halted the country’s nuclear expansion plans. Western nations widely believe that Iran’s pursuit of  fission-based energy is a guise to hide its development of nuclear weapons.

Given these suspicions, just imagine the Obama administration’s reaction when the New York Times wrote on September 1, 2011 that Iran “is moving its most critical nuclear fuel production to a heavily defended underground military facility outside the holy city of Qum.” In addition, Iran also announced its first nuclear plant is going into operation. In fact, Iran’s state-controlled TV station  Al Alam announced that the $1 billion Bushehr plant was officially inaugurated on Sept. 12, 2011. Whether Iran is secretly hiding a nuclear-weapons agenda or not, these developments certainly do nothing to deter worldwide suspicion.

In light of these events, it is perfectly reasonable for the Obama administration to remind Iran that any ventures into a nuclear buildup will be closely shadowed. Additionally, instead of publicly admitting the sale, it makes sense to release it as a “leak”. Iran could perceive an outright declaration as too hostile, which would lead to a further strain in its already tense relationship with the United States.

A second plausible reason for this timely announcement is U.S. domestic politics. President Obama’s approval among the Jewish American community is declining. This is due in part to a feeling that Obama is less supportive of Israel than his predecessors. Critics point toward Obama’s urging of Israel to make huge concessions to the Palestinians based on the 1967 borders as evidence of this. A recent Gallup poll conducted from September showed a drop in Obama’s approval ratings from 60 percent in June to 55 percent. His disapproval ratings also increased from 32 to 40 percent, resulting in a net 11 point drop in approval from the Jewish population.

The Jewish community plays an integral role in voting, especially in swing states such as Pennsylvania and Florida. With the upcoming elections looming ahead, it only makes sense that Obama would attempt to increase his approval ratings in this community. What better way to do this than “announce” that he’s been secretly boosting Israel’s military since 2009? In theory this information, coupled with his vehement refusal of Palestine’s entry into the United Nations, should be more than enough to persuade any disconsolate Jewish American that Obama has Israel’s best interests at heart.

Given these two crucial and timely reasons, the “leak” was surely no accident. It was a strategic maneuver on Obama’s part. Not only did he subtly warn Iran of his watchful eye, but he also released it before the upcoming elections to enhance his image among an important group of voters. Talk about killing two birds with one stone! Sure, it’s possible that this could have all just been a slip-of-the-tongue accident. According to recent happenings, however,  it seems like this mouth was ready to talk in the first place.