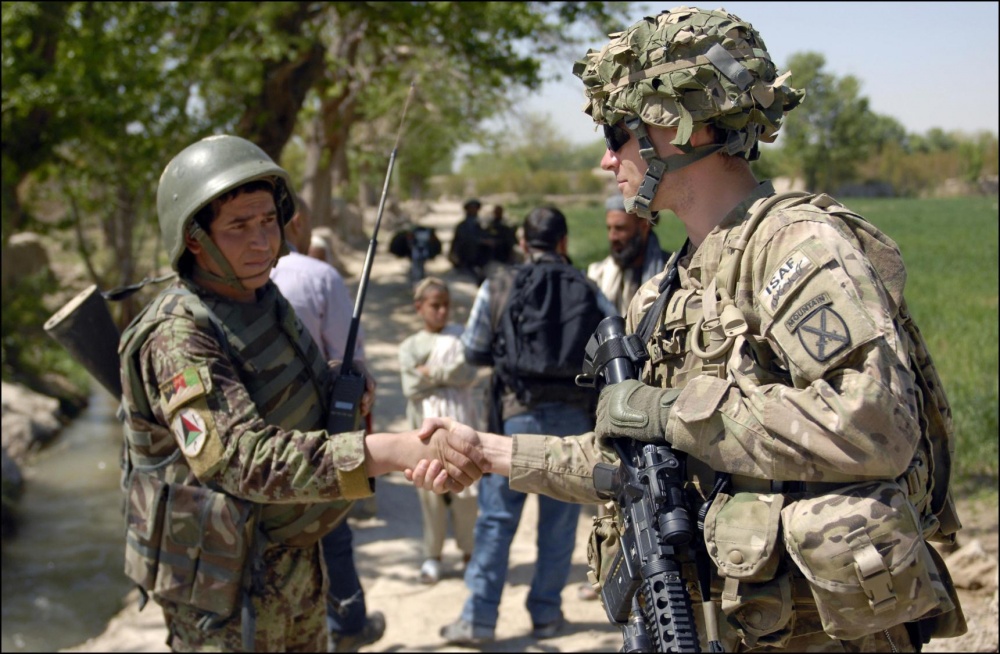 The views expressed here are those of the author and do not reflect any official policy or position of the US Government, the Department of Defense or the US Army.

“I don’t think it is responsible to the American taxpayers to leave it like it is. We need a way forward.”

Following the Battle of Tora Bora, while the Bush Administration remained steadfast in its commitment to maintaining a light footprint in Afghanistan; taking into account the destabilizing nature of regime change, it began to recognize that the US needed to ‘do right’ from a humanitarian standpoint to preclude an environment conducive to extremism. However, given Afghanistan’s decimated infrastructure, and deteriorated security, it was evident that ‘doing right’ would involve the same extensive, expensive and resource-intensive nation-building that the Bush Administration was reluctant to provide. Therefore, the issue of reconstruction presented yet another contradictory policy prescription, the lasting effects of which, specifically regarding building the Afghan National Defense and Security Forces (ANDSF), have continued to stymie the peace process.

But why was the Bush Administration reluctant to engage in nation-building in the first place? In a previous article, I established:

[Bush] held a personal aversion towards protracted involvement, and an aversion towards using conventional forces to engage in … risky nation-building that would tie “up US troops indefinitely,” and stir up anti-American sentiments.

Given the above, why on the one hand, did the Bush Administration speak of a ‘Marshall Plan’ for Afghanistan, and on the other, condemn nation-building?

In a Special Inspector General for Afghanistan Reconstruction (SIGAR) interview, senior Rumsfeld advisor Marin Strmecki explained that the Administration was only “against [nation-building] in the sense of [the US] being [it’s] preeminent and dominant force.” Therefore, the point of contention was not reconstruction per se, only the potential unilateral commitment that it entailed. Essentially, the Bush Administration was willing to ‘talk the talk,’ setting impressive objectives, but was reluctant to ‘walk the walk’ and put forth the necessary resources. As a result, to address the issue at hand and assuage fears of protracted unilateral commitment, the International Security Assistance Force (ISAF) was established.

In addition to hunting anti-Afghan forces and developing the Afghan Government (GIRoA), a large part of ISAF’s mission was to create a self-sufficient ANDSF. Regarding the latter, under a lead nation approach, the US was assigned the responsibility of developing the Afghan National Army (ANA) and Germany, the Afghan National Police (ANP). However, just as how a lack of strategic clarity prevented systematic planning at the national level, the broad-based coalition of ISAF fared similarly. For instance, German officials reported that they believed their role in ISAF was simply to serve as short term advisors; “they did not believe [that they] entailed full responsibility for developing … the entire ANP.” Of course, this view ran contrary to the Bush Administration’s intent for urging the establishment of ISAF in the first place, which was to maintain a light footprint by spreading the burden of reconstruction between multiple nations. Furthermore, reflecting fears of protracted involvement; pre 2004, ISAF was relegated to Kabul to primarily train and advise, with a ragtag ANDSF in charge of securing the remainder of the country.

Consequently, the Bush Administration took nearly unilateral control of ANDSF development, fearing that deteriorated security would threaten Afghan elections and by extension, an expedient handover of responsibility to the newly formed GIRoA. However, it soon became evident that the ANDSF would need to mature significantly before shouldering the full burden of Afghan defense. Therefore, to bridge the gap while ANDSF forces were trained, the US commitment in Afghanistan, and in turn, the intensity and frequency of combat operations, were steadily increased. To reflect the new US-centric effort, a new  military command, the Combined Security Transition Command–Afghanistan (CSTC-A) was created to train the ANDSF. On the other hand, to minimize the duration of a US presence, the Bush Administration also sought to rapidly expand the ANDSF on a condensed timeline, prioritizing quantity over quality.

With the Iraq War siphoning attention away from Afghanistan, and the Bush Administration’s contradictory prescriptions towards reconstruction guiding a reactionary, rather than proactive approach at the policy level, the stage was set for a Taliban insurgency. In response, ISAF’s mission was expanded beyond Kabul, a decision that some leaders opposed, given their interpretation of ISAF’s role within the train-advise-assist paradigm; with the latter component holding secondary importance. For instance, Canadian Prime Minister Jean Chrétien said: “We [Canada] are supporting the expansion of ISAF, and we will work to convince other nations to send troops here… but will we put more troops? We do not have the intention, and we are not able to do this at this moment.” With this dysfunction, ISAF’s efforts to stabilize Afghanistan were “akin to punching an adversary with five outstretched fingers rather than one powerful closed fist.”

For the ANA, training capacity was increased from two to five kandaks (battalions), while basic training was reduced from 14 to 10 weeks. For the ANP, despite a reported 34,000 ‘trained’ Afghan police officers, only 3,900 had been through the prescribed eight-week basic course, with the remainder only having attended a two-week introductory course. The rapid expansion of the ANDSF led to them becoming “miserably under-resourced,” and according to General Barry McCaffery, such circumstances were a “major morale factor for the force.” However, despite these issues, the ambitious Bush Administration continued to push for rapid expansion, threatening the GIRoA with reductions in funding if they did not comply.

Undertrained and underequipped, the ANDSF did not stand a chance against a resurgent Taliban during the latter half of 2008. Infamously, one such attack overran a US Combat Outpost in Kamdesh, resulting in the tragic deaths of eight US Soldiers and 27 wounded, following their betrayal by the Afghan Local Police (ALP) and abandonment by their ANA contingent.

Despite these signals, expediency, rather than responsibility, would continue to characterize US policy under the Obama Administration, as the President called for a short ‘surge’ in activity “to weaken the Taliban and improve the ANDSF,” before a 2014 withdrawal. The surge, which was intended to bring the war to a quick end, incentivized corruption by flooding the rentier state with a tsunami of cash, digging Afghanistan deeper into a kleptocratic grave. For example, Afghan civilians reported prolific extortion by ANDSF forces, with “two-thirds of police checkpoints charging illegal tolls” in 2013. Subsequently, in a survey conducted by ISAF between 2010 and 2012, Afghans ranked corruption as one of the top three reasons why they “choose to support the Taliban instead of the government.”

Subsequently, with the end of the surge and scheduled drawdown of offensive combat operations in 2014, ISAF was dissolved, and Operation Resolute Support (ORS) was initiated to achieve ‘peace with honor’ by handing over responsibility to the GIRoA and ANDSF. Accordingly, US troop numbers dropped to just 16,100 advisors, from a peak of 100,000 combat troops in 2011.

Unsurprisingly, the drawdown emboldened insurgent forces and instead of proving their self-sufficiency, the ANDSF suffered major failures, most notably the fall of Kunduz City in 2015. According to eyewitness accounts, during the battle, “a chaotic environment quickly spread and government officials, ALP commanders and … ANA officers fled to the … airport, leaving [the city] effectively leaderless.” This scene, reminiscent of South Vietnamese soldiers’ actions during the fall of Saigon, was certainly a reality check for policymakers.

For many in the US Government, it became evident that forcing western solutions onto a largely illiterate population had created unsustainable dependencies on foreign assistance. During the surge, the tsunami of funding and military advisors for ANDSF development created a force that was “a carbon copy of US doctrine” and Afghan commanders were “addicted to air support,” a combat enabler inorganic to their organization. Given the pressure generated by the Obama Administration’s hard deadline, indigenous solutions were replaced with western ones, and a blind eye was turned towards corruption, because doing so was expedient given the time constraint. Former US Special Representative for Afghanistan and Pakistan Senior Advisor Barnett Rubin explained: “We did what we knew [in Afghanistan] … not what needed to be done.”

If the surge incentivized corruption and produced a deficient ANDSF, why wasn’t it remediated under the Obama Administration?

As the 2014 deadline neared, the top-down pressure from the Obama White House to report success up the chain of command, outweighed demands for accountability. For instance, ANDSF trainers were encouraged by their commanders to bolster ANA and ANP competence assessments in order to present Washington with a facade of higher numbers of combat-ready units. In a 2015 interview with SIGAR, Lieutenant General Michael Flynn questioned: “So, if we are doing such a great job, why does it feel like we are losing?” Answering his own question, he remarked, no “commander is going to leave Afghanistan …  and say, you know what, we didn’t accomplish that mission. So, the next guy that shows up finds it screwed up.” By placing a time constraint on ‘winning,’ the Obama Administration inadvertently stymied a chance for victory, and peace. Consequently, as of 2020, American and Coalition advisors remain in Afghanistan, and despite efforts to broker a negotiated settlement, the Coalition’s resolve seems to be shrinking, while the Taliban’s grows.

Addressing his generals, President Trump reportedly exclaimed: “You guys have created this situation. It’s been a disaster. You’re the architects of this mess in Afghanistan … you haven’t been able to fix it, and you’re making it worse.” Judging from the equanimous American acceptance of the capture of Saigon due to the widespread popularity for a withdrawal from Vietnam, given the similar public support for a withdrawal from Afghanistan, the President has little to worry in terms of blowback in the form of domestic opinion. However, in regard to international prestige and credibility, some critics of the peace deal, such as Richard Haass, President of the Council on Foreign Relations, claim that by withdrawing, “the US will cast further doubt on [its] willingness to sustain a leading role in the world.” Such qualms may be a victim of the sunk cost fallacy and ‘press-on-itis,’ which is the unwise tendency to persist with a plan that is failing, especially after considerable investments have been dedicated.

Mark Hannah, a senior fellow at the Eurasia Group Foundation puts it succinctly:

“We’re going into the 20th year of this war where people who were not even born on Sept. 11 are being called to serve [in Afghanistan],” Hannah said. “I think there’s a sense that … the original motivation for going into Afghanistan in the first place has receded into the rearview mirror.”

During the the 2020 Democratic Presidential Debates, Rep. (D-Hawaii), combat veteran and member of the House Armed Services Committee: Tulsi Gabbard, asserted that “we [the US] are no better off in Afghanistan today than we were when this war began,” and promised to bring all US troops home within her first year if elected President.

It is time for policymakers to join Rep. Gabbard and President Trump in making a bipartisan and definitive assessment of whether the sheer prospect of remaining embroiled in a never-ending quagmire will tarnish America’s international reputation more than coming to a negotiated settlement ever will.