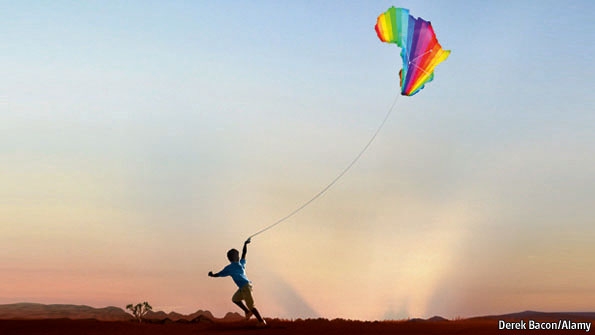 Adichie spoke about “the danger of a single story.” Like the student who stereotyped Nigerian men from reading one novel, many of us are guilty of generalizing the images of Africa that we see in the media or online. Often, outlets publish stories on coup d’états, war, AIDS, or other misfortunes that befall the continent. However, The Economist’s Dec. 2011 issue witnessed a change – that of an “Africa Rising.”

According to the International Monetary Fund’s World Economic Outlook report, Sub-Saharan Africa will experience 5.7 percent growth this year, while Business Insider says 10 Sub-Saharan African countries made the list of 20 of the fastest projected compounded annual growth rate (the year-over-year growth rate of an investment over a specified period of time) from 2013 to 2017. Included in this list is Rwanda, a country that can now be remembered for its post-genocide growth, and South Sudan, the newest member of the United Nations.

Yet this upward trend is nothing new. Angola is among Africa’s rising economies. Many, in fact, view Angola as the world’s first reverse colony. In the words of Paulo Pimenta, a Portuguese lawyer, “Historically the Angolans worked for the Portuguese, but now it’s the Portuguese who are working for the Angolans.”

Moreover, VMK’s Elikia is Africa’s first Android-based smartphone. Elikia, meaning “hope,” is an entry-level product designed by Congolese entrepreneur Verone Mankou, who “hopes” that Elikia will be the iPhone of Africa or the Samsung of India. It is sold in stores throughout West and Central Africa and online in France.

But VMK does not limit itself to mobile phones. Founded in 2009, the company is now expanding its market to include its Way-C tablet. Sales, at the moment, are limited to the Republic of the Congo and France, but will compete in Belgium, India, and 10 West African countries by 2014.

In addition to these accounts of a thriving Africa, the Millennium Development Goals paint a scenario of development in Sub-Saharan and Northern Africa. Not only have the regions decreased extreme hunger and poverty (Goal 1), but they have also increased primary school enrollment (Goal 2), increased gender parity in primary and secondary school (Goal 3), decreased child mortality rates (Goal 4), and improved maternal health (Goal 5).

Not everything happening in Africa, therefore, is bad. Some are creating inventive approaches to promote a positive image of Africa that takes Adichie’s message to heart. For example, a group of South African students teamed up with a Norwegian aid agency to challenge the “stereotypical image of Africa as a continent riddled with conflict, disease, corruption, poverty, and brutal dictatorships needing rescue from developed nations,” by releasing an aid parody, titled “Africa for Norway.”

Commenting on the video, NPR’s Suzanne Lennon says, “The point is that images of helpless Africans are just as inaccurate as the idea of helpless freezing Norwegians.” Similarly, Adichie leaves TED audiences with this thought: “That when we reject the single story, when we realize that there is never a single story about any place, we regain a kind of paradise.”