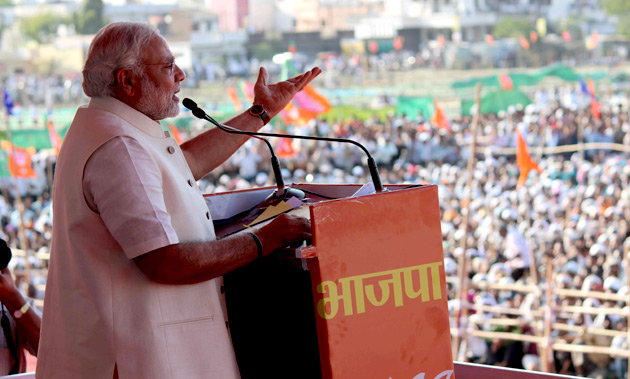 The arrest of the Indian diplomat, Ms. Devyani Khobragade, last December in New York sparked a renewed interest in the future of diplomatic relationships between the United States and India. This controversy, in addition to current tension between the U.S. and Narendra Modi, the widely supported candidate for Prime Minister in this month’s elections, presents an interesting reflection of the wider status of future U.S.-India relations. In the time of a rapidly growing China, India is positioned as the U.S.’s largest democratic ally in Asia. One that, despite differences between the two nations, has led to increased cooperation economically and diplomatically. Recently, however, tension between the U.S. and India has grown due to alleged cases of human rights abuse cases involving Ms. Khobragade and Narendra Modi.

Ms. Khobragade was charged by U.S. authorities for the submission of false documentation in order to obtain a work visa for her maid. In addition, it was uncovered that she was paying the housekeeper well below minimum wage at about $573 a month. The controversy, however, is not a result of Ms. Khobragade’s alleged crimes but rather her mistreatment by U.S. authorities. Considering the treatment that we expect of our officials in foreign nations, one would assume that U.S. authorities would in turn give foreign diplomats different treatment than common criminals.

Indian officials have reported that Ms. Khobragade was subjected to multiple cavity searches, as well as being kept in a holding cell with “drug addicts” before she was released on a bail of $250,000. Following her arrest, the Indian government released a statement regarding the treatment of Ms. Khobragade, stating that it was “shocked and appalled at the manner in which she has been humiliated by the U.S. authorities.”

What is perhaps most surprising in this case was the reaction of the Indian government. While a formal statement condemning the treatment of Ms. Khobragade is customary, the reaction against U.S. officials in India is unexpected. Indian officials proceeded to remove the concrete security barriers surrounding the American Embassy compound in India, while also demanding that the embassy release the details about all of their Indian employees. According to The New York Times, Indian officials also asked for “the names and salaries of teachers at the American Embassy School; that the embassy commissary stop importing liquor; and that diplomatic identification cards for consular staff members and their families be returned.”

This strong reaction to the treatment of an Indian diplomat has reawakened a growing concern regarding the future of diplomatic relationships between the U.S. and India. India is currently the world’s largest democracy with a rate of economic growth rivaling that of China. In the past decade specifically, diplomatic relations between the two countries has been generally positive, beginning most notably in 2005 when President George W. Bush signed legislation that allowed for civilian nuclear cooperation with India and redefined U.S.-India relations.

The increasing cooperation between the two nations gave the U.S. a regional ally in response to a growing China. In 2013, President Obama and Indian Prime Minister Singh furthered this relationship through an agreement for Westinghouse to supply nuclear reactors for Indian nuclear power plants. The cooperation between the two nations on the issue of nuclear power has in essence led to a de facto alliance motivated by China’s growing power in the East. After this meeting, Singh and Obama released a statement declaring that India and the U.S. “share common security interests and place each other at the same level as their closest partners.”

However, despite this burgeoning alliance, there are areas of contention that reflect how fragile diplomatic relationships between the U.S. and India may be. The treatment of Ms. Khobragade, in conjunction with the fast approaching elections, has been interpreted as a matter of national pride. India’s staunch support of Ms. Khobragade is in essence a larger refusal to be bullied by a large superpower like the United States.

Ms. Khobragade is not the only Indian official seen as contentious to the future of U.S.-India diplomatic relations. Narendra Modi, the chief minister of the Indian state of Gujarat, is another point of growing strain within the relations between the two countries.

In India, Narendra Modi is widely believed to be the next Prime Minister after this year’s upcoming elections. Within the Western world, however, Modi is not held in high regard due to his complacency in the mass killing of Muslims in the 2002 riots in his own state of Gujarat.

Human Rights Watch reports that the riots of 2002 were sparked by the death of 59 Hindu pilgrims in a train fire caused by the attack of a Muslim mob. In retaliation, Hindu mobs killed hundreds of Muslims, displaced thousands and destroyed their homes and property. In the years after this episode of violence, efforts to investigate the cases were stalled while activists and lawyers were subjected to harassment and intimidation. It was not until the Supreme Court intervened that trials began to take place.

At the center of this controversy is the Chief Minister, Narendra Modi, who is of the Hindu nationalist Bharatiya Janata Party (BJP). Modi and his fellow officials are said to have deliberately obstructed investigations. Furthermore, there is evidence which links Modi and his colleagues to the anti-Muslim attacks, as it is reported that the rioters had detailed information regarding the locations of Muslim residences and businesses. An independent media organization known as Tehelka has film footage of the accused speaking of how Modi provided his blessings for the attacks. As a result, in 2005, the United States revoked Mr. Narendra Modi’s visa under the law that bars foreign officials who are “responsible for or directly carried out … particularly severe violations of religious freedom.”

Despite his alleged complacency and involvement with the anti-Muslim attacks, Narendra Modi is still regarded as a front-runner in this year’s upcoming election. Economically, he has brought prosperity to the Gujarat state in India. When it comes to gaining support as a candidate, voters often respond more to improvements in their economic well-being than a candidate’s alleged involvement in a case of human rights abuse. Modi is well known for lowering the rates of corruption, increasing industrial growth, and attracting foreign investment from companies such as Ford and General Motors. While critics point out that business leaders are giving funds to the BJP in return for favors, it is still important to note Modi has increased the development of rural infrastructure in Gujarat, as well as access to reliable electricity and a booming agricultural industry. Internationally, he is recognized for his economic policies and in the summer of 2013 Britain began to re-establish contact with his state government.

But what does this mean for the future of U.S.-India diplomatic relations in the upcoming year? If Narendra Modi is elected Prime Minister, it has potential to further tension between the two nations because the U.S. would be denying access to a foreign head of state; a tension that the U.S. government wants to avoid as India is the strongest regional ally. For the moment, opinions remain split.

Ron Somers, who is the head of the U.S.-India Business Council, has commended Modi for being “a magnet for investment.” A Congressional Research Service report lauded Gujarat as “perhaps India’s best example of effective governance and impressive development.” Meanwhile, Dr. Katrina Lantos Swett, vice chair of the United States Commission on International Religious Freedom, has expressed that she believes the U.S. will still uphold the denial of a visa to Modi due to his role in the events of 2002. Human rights activists believe the U.S.’s commitment to international human rights will outweigh the desire to further relations with an Indian government under Modi. While perhaps the idealist in everyone would like to believe this is true, given the relationship between the U.S. and nations such as China and Russia, it’s unlikely.

If Narendra Modi should be elected Prime Minister during the elections this month, it is highly likely that the U.S. will attempt to work towards re-establishing diplomatic ties, particularly due to the success of Modi’s economic policies in the Gujarat state and to the U.S.’s desire to maintain India as a strong regional ally.  While tension from the anti-Muslim attacks remains, the U.S. does not have a strong history of cutting off all diplomatic relations due to human rights abuses within foreign governments. With India, the U.S. has been committed to strengthening their relationship as a regional ally, particularly with the sharing of nuclear technology, in response to a bourgeoning China.