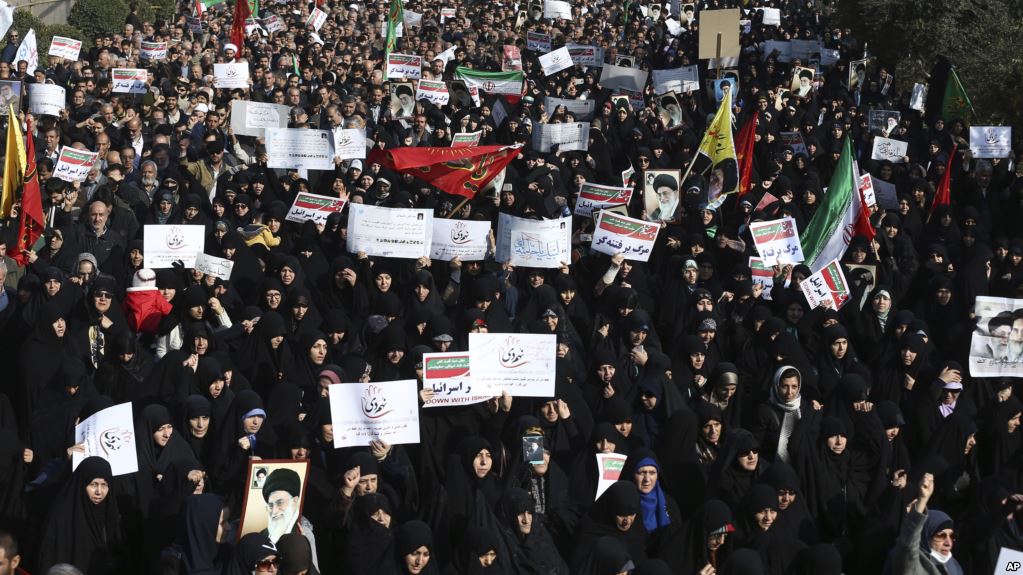 A few weeks ago, something terrible and yet necessary began. Iranians took to the streets in several cities to protest a corrupt and tyrannical regime. This is the largest public show of discontent in Iran since the 2009 Green Movement in which thousands of people risked their lives to protest the outcome of their presidential elections. Now, as the protests grow and tensions in Tehran continue to build, it is of the utmost importance that the U.S. adopt a policy that simultaneously benefits American interests in the Middle East while seeking to further the success of the protest movement and assure that lives already lost not be lost in vain.

While some may call for firm and explicit action from Washington—such as sanctions or intervention—I hold that such an undertaking would be harmful to the movement’s potential for success.  Rather, due to a history of backfiring rhetoric between the U.S. and Tehran, an existing regional power struggle in the Middle East, and the ease by which American actions could be misinterpreted and skewed for the benefit of the current Iranian regime, the United States must instead take advantage of the protests by adopting an approach of extreme caution.

For decades Washington and Tehran have shared a bombastic rhetorical relationship with one another. One such example was President Bush’s 2002 declaration placing the Islamic Republic in an “Axis of Evil” alongside Iraq and North Korea.  The aftermath of the statement was thousands of Iranians taking to the streets belting out, “Death to America”. This included many Iranians who indicated that they rarely engaged in such celebrations, but spoke of having joined the protests in order to show solidarity against the Great Satan—America. This single statement by a U.S. President is credited not only with having strengthened the anti-Western rhetoric of Iranian hardliners, but also with causing Iranian citizens of all stripes to rally around a common enemy: the U.S. Just as foreign attacks on U.S. soil cause an outpouring of patriotism no matter domestic approval of the current government, American accusations against Iranian transgressions are bound to have a similar effect. Therefore, just as in 2002, statements of support for the protests by the U.S. will be seen by Iranian nationals as unwanted, and perhaps abhorrent, meddling by a country that has nothing but its own interests in mind.

In addition to historical tensions with Iran, the U.S. is also currently engaged in a geopolitical proxy war with Russia in the Middle East, the Syrian Civil War being the most significant manifestation of this Cold War-era clash. Saudi Arabia, backed by Washington, and Iran, with support from Moscow, struggle for dominance in the region while their superpower puppeteers pull strings behind the scenes. Thus, if the U.S. takes a strong and hawkish stance in Iran, Russia will feel it necessary to do the same. In fact, evidence of such a reaction from Moscow has already surfaced.  In a recent United Nations Security Council discussion, the U.S. initiated a dialogue concerning the protests in Iran to which Russia immediately responded with objections and a call to halt the discussion on the grounds that “it would represent an inappropriate interference in Iran’s internal affairs.” As if Moscow’s protests were not  enough, François Delattre, the French representative to the UN and typically an American ally, also explicitly diverged from the U.S.’s stance by stating, “However worrying the events of the last few days in Iran may be, they do not constitute per se a threat to international peace and security. We must be wary of any attempts to exploit this crisis for personal ends.” The United States’ official motive in bringing up the protests was unclear but, as is evident from the French representative’s statement, the international community—including both our European allies and Russia—is wary of the Trump administration’s current treatment of the protests and will react negatively to too much American interference.

The fact that the U.S. will use the opportunity presented by the protests to act exclusively for its own benefit is quite clear. Washington is playing a game of chess and Iran is another piece on the board. Combine this imperialistic image with our invasive history in the region as well as American support for the Saudis—whom Iranian state media is blaming for the protests—and a very sensitive situation emerges. It is easy to imagine an Iranian citizen still unsure of his resolve to put his life in danger by protesting a regime he does not support. It would not take much for him to believe that the U.S. is simply interfering to promote its interests, and not his own, thus deterring him from acting. It is therefore not difficult to understand the benefits Washington would reap from not taking an overt stance on the protests and instead letting them play out. President Trump would do well to learn from statements such as that of Emily Thornberry, a U.K. Labor Party politician, “Our approach now is one of extreme caution when it comes to Iran and a recognition that the society in Iran is an immensely complex one, and seemingly contradictory… For example, with these current riots, sometimes they are calling to reinstate the monarchy, sometimes they are calling out against [Ayatollah Ali] Khamenei, sometimes they are calling for Khamenei, sometimes they are calling for the price of eggs…”

Given the historically tenuous rhetorical relationship between the U.S. and Iran, the current proxy war between the American-backed Saudis and Russian-backed Iranians, as well as the aversion to protests that Iranian citizens will feel from any direct American support, the U.S. should not take a formal stance on the protests in Iran. Rather, Washington should allow the state media to continue to condemn and threaten the protestors, driving them away from the regime. Any American action or presence will only serve to drive the protesters under Khamenei’s protective, anti-Western wing. As things stand, the people of Iran are becoming increasingly bold in their opposition to the repressive acts of Iran’s leadership. If Washington’s desired outcome is regime change, the existing divide between reformers and hardline traditionalists must widen significantly. To help make that happen, the U.S. must do what it is not used to doing in the Middle East: Stay out.