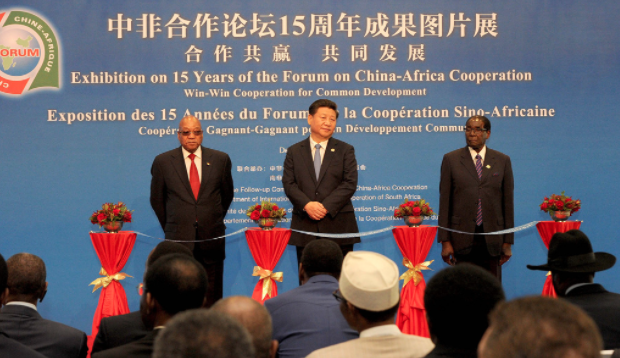 The minibus violently jostled left and right as we hit a road under construction. Awoken from my nap, I looked out the window half asleep. I figured I must still be dreaming as we passed Chinese signs, Chinese workers and Chinese machinery– wasn’t I in the West African country of Ghana? While accustomed to encountering diversity in Africa’s globalized metropolises, I was surprised to find a Chinese presence at a construction project en route to a small village in rural Ghana. As I traveled to more African countries, the image of Chinese investments against the continent’s cities and landscapes was a frequent recurrence.

Since the beginning of the 21st century, China has aggressively positioned itself in Africa through a host of economic activities ranging from infrastructure projects, construction, mining, social services, restaurants, retail and more. In what President Xi Jinping has deemed a “win-win” relationship, China extracts natural resources from the continent to fuel its economic development in exchange for cheap manufactured goods, roads, schools, hospitals, railways and more. A testament to its foreign policy commitment of “Go Global,” China surpassed the United States (US) as Africa’s largest trading partner in 2009.

China’s appetite to forge international partnerships comes at a time when rising populism has forced many Western countries to look inward, with President Donald Trump notably proposing to cut foreign aid by one-third. The economic powerhouse is also ramping up its activities in Latin America in light of a diminishing US presence, doling out more development finance than the World Bank, Inter-American Development Bank and the Andean Development Corporation combined. China has also set its eye on the Middle East, releasing its first Arab Policy Paper which describes how the country hopes to increase trade with the region mostly in exchange for oil.

By pouring $2.25 billion into Africa annually, China has positioned itself as a viable, and often more attractive, alternative to traditional Western aid and development organizations. Chinese money is accompanied by a policy of no interference, meaning few strings are attached for the recipient country besides access to natural resources or a local market. Unlike Western money that often comes with conditionalities like enforcing good governance, human rights or environmental protection, Chinese aid is doled out efficiently and projects are often completed on schedule or earlier. Their non-interference policy also means that the Chinese are willing to indulge African despots that many Western development organizations dare not. One such dictator includes Robert Mugabe, Zimbabwe’s dictator that is purportedly using Chinese funds to increase surveillance capacities rather than assisting the 72% of Zimbabweans who live in poverty (national poverty line).

China has been criticized by many Western countries and media outlets as a neo-colonial force that disregards local labor regulations, funds dictatorial leaders, destroys local markets and invests in construction projects that lack quality and lifetime in the name of profit. While these accusations are valid, China is providing desperately needed infrastructure to a continent that still struggles to achieve fundamental levels of development even after the $30 billion in aid Africa has received since the 1970s. Western development agencies are known for their bureaucratic and top down approach to development that often imposes, unsuccessfully for the most part, western cultural norms and institutions on a continent that frequently does not share the same values. The Chinese have been able to successfully execute projects that Africans can make use of like roads, schools and hospitals.

China’s African foreign policy strategy is deeper than the superficial goal of economic exploitation or neo-colonialism. In light of shifting global paradigms, where the US seems more and more like a decaying empire, China is seeking to build strategic partnerships across the continent that result in international signs of support like at the United Nations. In fact, one of China’s first projects in Africa was the construction of the Tazara railway in the 1970s, connecting Tanzania to Zambia. In exchange for the railway, China required support at the UN to be reinstated in the Security Council. AidData reveals that for every 10% increase in voting support at the UN, China increases aid by 86%. Another bargaining chip for access to Chinese money is often international recognition of China over Taiwan, which most recently occurred with the small, African island country of Sao Tome and Principe.

Another indication that China seeks strategic alliances rather than a form of pure exploitation is China’s establishment of the tri-annual Forum on China-Africa Cooperation (FOCAC) in 2000. During the most recent FOCAC in 2015, where 50 African leaders attended compared to four in the first forum, President Xi promised $60 billion investment in Africa. In 2013, President Xi also revealed his One Belt, One Road initiative, an ambitious vision with a $1.6 trillion price tag, linking Asia, Africa and the Middle East’s trade routes to create a stronger Eastern trade bloc. Perhaps a flex of its geopolitical muscle and a wink to the West, China started building its first African military base in Djibouti— only about ten miles from the US’ largest African military base.

China is presenting itself as a champion of the East and an alternative option for financing the development of emerging economies. While characteristics of China’s foreign policy are accurately likened to economic exploitation, it appears China’s deeper goal in Africa is to forge lasting partnerships in exchange for political loyalty. This may also be influenced by the fact that the longevity of the Sino-African “win, win” relationship is contingent on the Chinese economy’s success. With Chinese economic growth consistently slowing and commodity prices fluctuating, a purely economic agenda may not be sustainable. China presents itself to African nations as an example of an alternative model for climbing out of poverty, an easier and more efficient financing partner and a global leader rivaling the Western hegemonic power structure. A testament to their attempt at cultivating an international image of partnership and leadership, the Chinese Ambassador to Ghana recently commented on the One Belt, One Road initiative, “The belt and road initiative comes from China, yet it belongs to the world.”