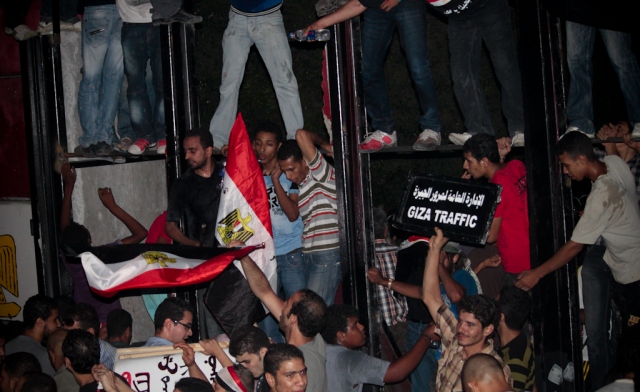 September 9th marked a new series of protests in Cairo’s Tahrir Square. Organizers labeled these demonstrations as “correcting the path”. The protestors gathered to express frustration over several aspects of Egyptian society, including the military’s handling of the Mubarak trial.

A translation of the demands states:

Egyptians will protest on Friday, September 9th to ensure their revolution is on the right path.
– Permanent end of military trials of civilians.
– A clear timeline with exact dates of when the military council will hand over power to an ELECTED CIVIL authority (The initially promised 6 months have now finished).
– Canceling the new law issued by military council that prohibits sit-ins and strikes.
– Change the new elections law that helps the same old corrupt businessmen win the elections.
– Ensure the Egyptian police focus on ending crime and criminality rather than attacking law-abiding citizens.
– Implement the minimum pay for public sector workers and maximum salaries for senior officials.
– Implement Egyptian laws that will ensure the corrupt heads and symbols of Mubarak’s ruling national party, and who have been proved to have rigged Egyptian elections for years, can no longer stand elections again.

Thousands of Egyptians showed up to the protests, but attention was cut short when the Israeli embassy in Giza became the target of the demonstrators’ frustration. Using sledgehammers and other objects, protestors hacked at the recently erected 3-meter cement walls and climbed over it, heading into the first floor of the Nile-side high-rise housing the embassy. The demonstrators made it far enough to grab embassy documents from the foyer and scatter them around. Someone even tore down the Israeli flag. Meanwhile cars were set ablaze and tear gas engulfed the area, as protesters clashed with the police and the military.

A similar incident happened on August 21, 2011 after five Egyptian security officers were killed during an Israel Defense Forces’ mission that targeted militants in Egypt’s Sinai Peninsula. The mission was in retaliation for a bus attack in Eilat, Israel. The Sinai security officer casualties sparked protests in front of the Israeli embassy. During the demonstration, one protester climbed to the embassy’s 21st floor and tore down the Israeli flag, replacing it with an Egyptian one. The individual, an Egyptian carpenter, was instantly regarded as a hero and nicknamed “Flagman”. As a result of the incident, the aforementioned 3-meter cement wall was built in an effort to ward off future attacks on the embassy.

Egyptian-Israel relations for the past thirty years were never warm given the countries’ history of warfare with one another. Yet when conflict erupted in the past President Hosni Mubarak managed to calm tensions. Strife has escalated between the two countries in his absence. Egyptians clamored for the expulsion of the Israel ambassador after he refused to apologize for the Sinai incident. In addition, some have called for a revision of the U.S.-brokered 1979 Camp David Accord that established peace between Egypt and Israel. In this time of conflict, sympathy for the Palestinian cause has grown to play an even greater role in the demonstrations.

The incident is a setback for Egyptian-Israeli relations, but not an entire loss, as the embassy still has Ambassador Levanon’s deputy as representative in Cairo. Israel stayed calm throughout the demonstrations for it does not want to replicate the recent deterioration of Israel and Turkey’s relations after the Gaza flotilla incident last year.

In all, the embassy incident was a setback for “correcting the path” protesters, as it distracted the people from domestic reforms and shifted the focus to Israel. This was actually benefited the Egyptian military and its control over the country. There was no point in raiding the Israeli embassy, as it only proved to many that Egypt might not be ready for democratic elections.

Israel is in a complex position and it will be interesting to see how it reacts to these events. With the relationship tarnished with its two allies, Turkey and Egypt, it must keep a low profile and make some compromises. Coupled with the Palestinian bid for U.N. recognition coming in late September, Israel may soon find itself be backed into a corner. It remains unclear how these conflicts will ultimately shape the political landscape of the Middle East.

Above picture used with permission: