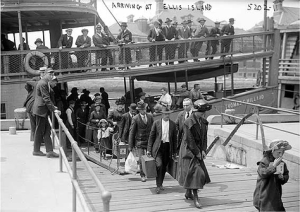 Human migration has, throughout history, been a force that has impacted the development of countless societies and cultures. From the waves of earlier generations who migrated out of East Africa and went on populate the rest the planet, to the more recent Europeans who journeyed to places like the United States and Canada, migration has inarguably been a force that has shaped the development of world history and human civilizations. Today, immigration remains a salient, and controversial issue, and in the United States, one that needs to be addressed in the form of comprehensive immigration reform.

To highlight just how important the issue of immigration is, on November 20th 2014, President Obama announced that he would use his powers of executive action to allow up to five million undocumented immigrants to remain in the United States. The president’s plan will grant temporary protection from deportation to select people who qualify for the program. While many Americans, including immigrants’ rights groups, lauded Obama’s action, many others Americans vehemently oppose policies that will make it easier for immigrants to live and work in the United States. According to the New York Times, critical reactions to Obama’s plan included accusations of treason and domestic terrorism against the president, and some members of Congress predicted outright violence and rebellion. Immigration has long been a divisive political issue in the United States, and the prodigious backlash against the president after his announcement only serves to illustrate the severity of the division.

Despite the views of those Americans opposed to what they call “amnesty” for people they regard as “dirty” criminals, immigration reform is necessary for the United States. While it’s true that immigrants can threaten the jobs of Americans lacking a high school diploma who compete with them for low-skilled jobs, many economists agree that the immigrants living in the United States contribute to our economy in vital ways. This is especially true in California, which is home to one of the largest immigrant populations in the United States. California relies on immigrants to do essential jobs. For instance, many agricultural workers in places like California’s Central Valley or the Salinas Valley are undocumented immigrants and approximately half of those workers immigrated to the United States without proper documentation. Furthermore, Los Angeles is home to about one million undocumented immigrants. Those immigrants contribute to an estimated seven percent of the economy of the greater Los Angeles region. These figures clearly indicate that immigrants play a vital role in our economy and are woven into the fabric of our nation. Despite the crucial contributions they make, in 2013, 368,644 immigrants were deported, most of them to Mexico, Honduras, Guatemala, and El Salvador.

Obama’s announcement is apropos, as immigration has been an especially salient issue of late. This is due in part to the influx of thousands of children from Central America in 2013/14. Since 1990, the United States has received steadily increasing numbers of immigrants from Central America. In 2014, United States border agents arrested approximately 68,631 unaccompanied children attempting to immigrate to the United States, a number that represents a 76% increase compared to 2013. Many of those children came from Guatemala, El Salvador, and Honduras, which have been the source of increasing numbers of migrants for at least the past four years. Approximately fifty-eight percent of the children came to the United States fleeing extreme violence and even death at the hands of vicious gangs. Their arrival prompted protests and angry reactions from many Americans who wanted the children to be deported immediately, despite the evident risk deportation would pose to many of them.

Given their awareness of the significant safety and economic hazards that deportations pose to undocumented immigrants, such as risks posed by extreme poverty and that of violence at the hands of powerful Central American gangs, we should question why so many Americans oppose immigration reform of any kind, including Obama’s executive action. Critics of Obama’s immigration reforms raise legitimate points, such as worries about an abuse of presidential authority, fears that immigrants will unfairly take American jobs, and worries that sinister criminal elements will enter the country. Many Americans are either ambivalent or seem to have forgotten that most American citizens (or their descendants) came to the United States as immigrants at one time. What the backlash against Obama’s announcement shows is that when Americans perceive their own interests to be jeopardized, they can be lacking in empathy, unable to care about the fact that deporting immigrants breaks up families, separating parents from their children. This also holds true in the case of the Central American children, where deportation could lead to violence and/or death.

According to Amnesty International, “While states have the right to regulate entry and stay of non-nationals in their territory, they can only do so within the limits of their human rights obligations.” All nations therefore have an obligation to not place immigrants at an increased risk of human rights abuses, which includes placing them at risk through deportation. Too often however, these obligations are ignored by those who call for the deportation of all undocumented immigrants. This includes the Central American children, who would rather face the risks of migrating to the United States alone than remain in their homes. Given the international human rights norms and law the United States has sworn to uphold, its has a duty to reform its immigration policies to mitigate the risks deportation poses to immigrants.

Beyond the moral implications of the debate over immigration and deportation, there are significant practical reasons for the United States to initiate immigration reforms. Various groups stretching across the American political spectrum have provided broad-based support for sensible immigration reform. Such groups include technology companies who want to hire skilled skilled foreigners, various religious leaders, and a bipartisan group of senators who passed an immigration reform bill in 2013 that would deal with issues like border enforcement, pathways to legal residency, and plans on how to deal with future flows of immigrants. Notably, if the proposed policies are implemented, immigration reform can be done in a way that addresses the fears of both average citizens and politicians opposed to the much needed systemic overhaul.

Between the human rights issues and the practical considerations at stake, immigration reform in the United States is absolutely necessary. While President Obama’s executive action will make important headway in improving the United States’ policies towards immigration, more needs to be done to assist the millions of undocumented immigrants who remain at risk of deportation and are ineligible to participate in Obama’s program. Groups that support immigration reform must do more to counter the narrative laid forth by the virulent, anti-immigrant forces who continue to oppose any type of immigration reform. In addition to legal action, Americans must actively combat the hostility, prejudice, and anger directed at many immigrants. Given the slow progress toward these goals over the last several years however, we have a long battle ahead of us.