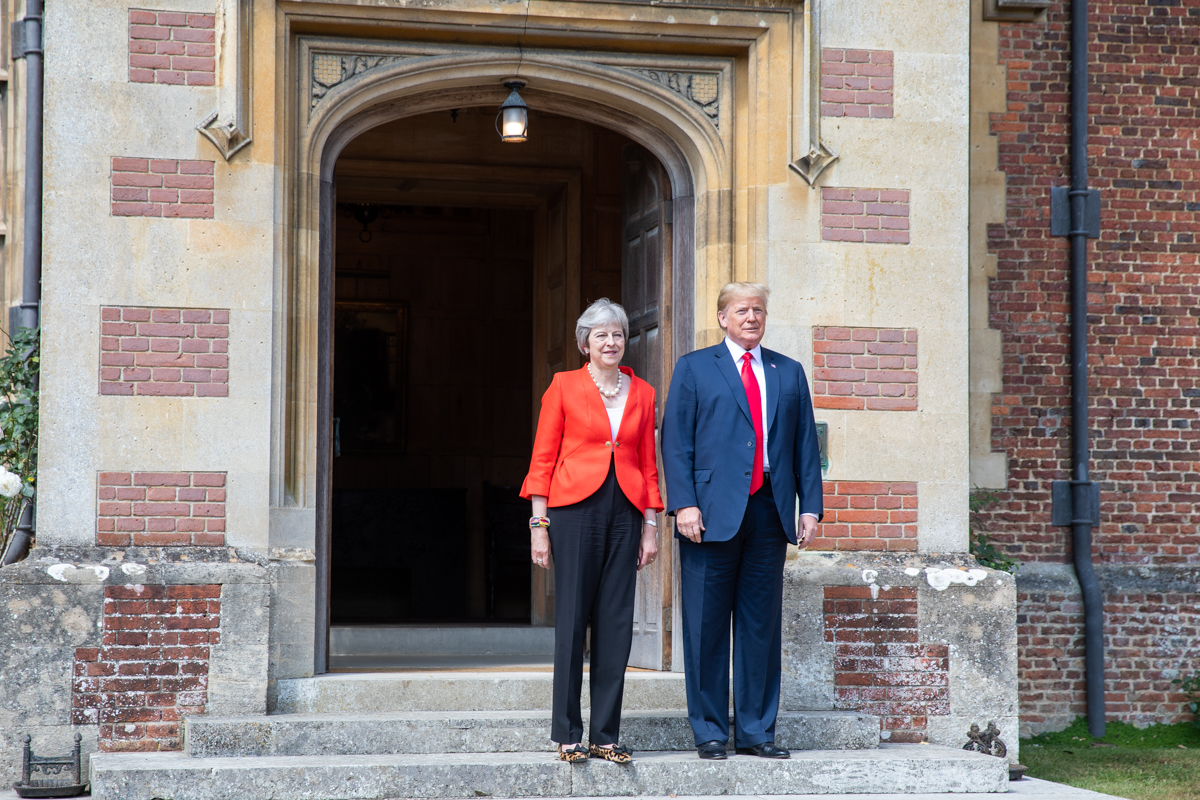 In his commencement address to the 2016 graduating class at Howard University in Washington, D.C, then-President Obama declared that, “Democracy requires compromise, even when you are 100 percent right.” Few would dispute Obama’s observation, and yet, over the last two months, two of the world’s oldest and most stable democracies—the United States and United Kingdom—appear as if they have forgotten this is the case, and thus may be losing their ability to function effectively like the democratic states they are. The U.S. has been unable to keep its government open for more than a few weeks at a time, while Britain remains mired in a months-long controversy over how—or if—they should leave the European Union. Lawmakers in both Washington and London appear unable to find solutions with their respective oppositions in order to avert political chaos. Yet one individual who never lost sight of the necessity of compromise in democratic politics, and must be reveling in Moscow as the institutions of his adversaries crumble, is Russian President Vladimir Putin.

It was precisely this goal of fomenting chaos that Russia sought when it interfered in both British and American politics in 2016 via the Brexit referendum and the American presidential election. Britain’s Parliamentary Committee on Culture, Media, and Sport found Russian meddling in the June 2016 Brexit referendum via Twitter, Facebook, and other social media platforms to be for “the purpose of undermining public confidence and of destabilizing democratic states.” Similarly, Moscow’s involvement in the 2016 U.S. presidential election was, as former Federal Bureau of Investigation agent and senior fellow at the Foreign Policy Research Institute Clint Watts described, done with the intention to “undermine democracy, [and] to make Americans lose confidence in democratic institutions and elected officials”. Russia’s means to achieve this was the use of social media ads that highlighted differences in societal makeup such as race, religion, and ethnicity. According to Watts, Russia’s tactic, both in the U.S. and abroad, was to turn “every crack…into a chasm and [to pit] different race, ethnic groups [and] socioeconomic groups” against each other. When political disagreements turn to ideological chasms, compromise becomes impossible, and, as Obama warned, democracy begins to fail.

The fight between a Democratic House and Republican president to keep the U.S. federal government running and the disagreements between hardline Brexiteers and pro-European Union internationalists over the future of Britain are increasingly illustrative of exactly what Russia intended for its democratic adversaries, and are already showing their threatening impact on both national harmony and even national security. On December 22, 2018, the U.S. Federal Government shutdown when President Donald Trump and the U.S. Congress were unable to reach a deal to fund the government. The shutdown stemmed from a standoff over Trump’s demand for $5.7 billion to fund a border wall on the U.S.-Mexico border, which the newly sworn in Democratic majority in the House of Representatives refused. This resulted in the the longest government shutdown in U.S. history. Roughly 380,000 federal employees were furloughed, while an additional 420,000 were expected to work without pay until the shutdown ended. Many of these workers held essential positions as Federal Bureau of Investigation (FBI) agents, U.S. Food and Drug Administration (FDA) inspectors, Transportation Security Administration (TSA) employees, Coast Guard members, and Federal Aviation Administration (FAA) air-traffic controllers.

The effects have been chaotic. Tom O’Connor, a special agent with the FBI told The Atlantic in early-January that the financial insecurities that faced the FBI, “equate[d] to a national-security issue.” With close to 5,000 agents furloughed, investigations and undercover operations were threatened, while the labs at the FBI headquarters in Quantico, which provide forensic-analysis to support those investigations, face a mounting backlog as those who operate them were forbidden from showing up for work. Additionally, FBI agents have lost access to undercover sources due to a lack of funds. One anonymous agent said that his unit had “lost several sources who have worked for months, and years, to penetrate groups and target subjects” because the Bureau cannot currently pay them.

Members of the U.S. Coast Guard, tasked with patrolling American waters and protecting U.S. ports of entry, were forced to work without pay. FAA employees, who ensure safety in the sky, began handing out leaflets describing their inability “mandate safety fixes in aircrafts” and the delay of the “implementations of new safety procedures”. The FDA halted food inspections. A superpower like the United States can’t be expected to compete with Russia on the world stage, let alone guard against international threats like Moscow when the very institutions that do so, the FBI and military, have to slow their operations, if not halt them entirely. Putin would love a weakened FBI and American military, and Washington is handing it to him.

It has not just been U.S. safety and security services affected by the shutdown. After the government reopened, the Congressional Budget Office reported that the shutdown cost the U.S. economy $11 billion. Formerly bipartisan traditions, such as the State of the Union address and governmental support for American troops abroad, were stunted after Speaker of the House Nancy Pelosi requested President Trump postpone the address during the shutdown. The President retaliated by cancelling Pelosi’s trip to visit troops in Afghanistan.

Even before these current crises, a December 2016 poll found only 30 percent of American millennials find it “essential” to live in a democracy, showing the calamity the U.S. faces. With the government’s current inability to compromise in pursuit of safety within its borders, along its coasts, or in its food, the latest shutdown is unlikely to improve an already bleak faith in American democracy and its institutions.

Across the Atlantic, democracy faces similar paralysis. The deadline for Britain’s withdrawal from the European Union looms on March 29th. Prime Minister May has been working to negotiate a deal for the U.K.’s departure with both EU representatives and the British Parliament. Although the EU approved May’s plan for withdrawal in early December, May chose shortly after to delay the parliamentary vote on the deal for fear that it would be rejected.

The result was a rebellion within her Conservative Party, with hardline Brexit supporters seeking to oust her via a party-wide no-confidence vote, a rare move in British politics. May was able to survive the vote and brought her Brexit deal to a parliamentary vote a month later on January 15. Nevertheless, it was thoroughly rejected by a margin of 432 to 202, the largest defeat handed to a Prime Minister in modern British history. Shortly after, with no deal in sight, opposition leader Jeremy Corbyn brought a Parliament-wide no-confidence vote against May, and yet she again skirted to victory by a slim 19-vote margin.

The Brexit deadline is less than nine weeks away with no deal in sight and no apparent change in government imminent. May announced her plan last week to return to Brussels to seek further concessions for a deal, but the EU is unlikely to budge. Other options include seeking a delay for Britain’s exit date or holding a second referendum, but both ventures seem unlikely to prosper.

If a deal is not reached before the March 29th deadline, it is very likely that Britain will be forced into a “no-deal Brexit”. Rather than maintaining certain economic and trading ties with the EU, as May has been trying to do, London’s relationship with Brussels will be severely damaged and the results potentially devastating. Economically it could be catastrophic. Many economists have said that a “no-deal Brexit” would be a “doomsday” scenario with Britain having to erect World Trade Organization trade rules at its borders. An International Monetary Fund projection said close to eight percent of Britain’s gross domestic product could be lost. British companies, with a variety of products ranging from wine to bicycles, have been stockpiling goods over fear that they may not be able to import them as quickly or as cheaply in the case of a “no-deal Brexit”. Britain’s National Health Service has stockpiled refrigerators as part of its contingency planning to ensure that imported drugs from Europe don’t go bad before they can reach their patients. Britain has even rehearsed a “traffic jam” scenario with trucks at some of its ports, to see how to handle the flow of goods coming into the country in the event of a British border closure. May appears now to have no good options. Like the country itself, her party is hopelessly divided between those who want out of the EU entirely and those who want to remain. No compromise or concessions appear imminent.

The current state of the U.S. and Britain, two of the world’s most powerful countries, is not what first-world democracy should look like. FBI agents unable to conduct their operations properly, planes unable to takeoff or land safely, ports and coastlines not protected adequately, and food not subject to the necessary scrutiny. Britons facing an economic “doomsday,” companies having to stockpile goods, and the NHS having to buy thousands of fridges in the event that they cannot import drugs fast enough. Meanwhile, citizens of two of the world’s wealthiest and powerful democracies must be looking on in disbelief.

The question now for the U.S. and Britain however is not if these two great nations are on a path headed towards disarray, but rather how far down it they are. While Brexit and the shutdown may seem to be unique and hence will go away soon enough, the root of the cause is that at present the right and the left in the West remain utterly and irreconcilably divided, and unlike Trump or Brexit, this situation is not going anywhere.

This is exactly what Russia wants: Americans and Britons exasperated at their governments’ sheer ineptitude. When Putin directed his intelligence operatives to intervene before the Brexit vote in the U.K and the 2016 Presidential election in the U.S, his goal was to undermine democratic institutions by stoking fierce division amongst their respective populaces. In a democracy, when people are sharply divided, the institutions of government cease to problem-solve effectively. The ideological gap becomes too distant to bridge through compromise, and passing legislation that the people want—the fundamental underpinning of a democratic country—becomes impossible. That said, Putin did not create this ideological divide, he simply exploited it. While it is worthwhile for the U.S. and U.K. to respond forcefully to Russian aggression, the real demons at fault for the chaos now engulfing Western democracy are internal, not external. Washington and London should deter Moscow to help quell their respective problems. But in the long run, it may require that they look inside their borders, not outside, to truly solve them.