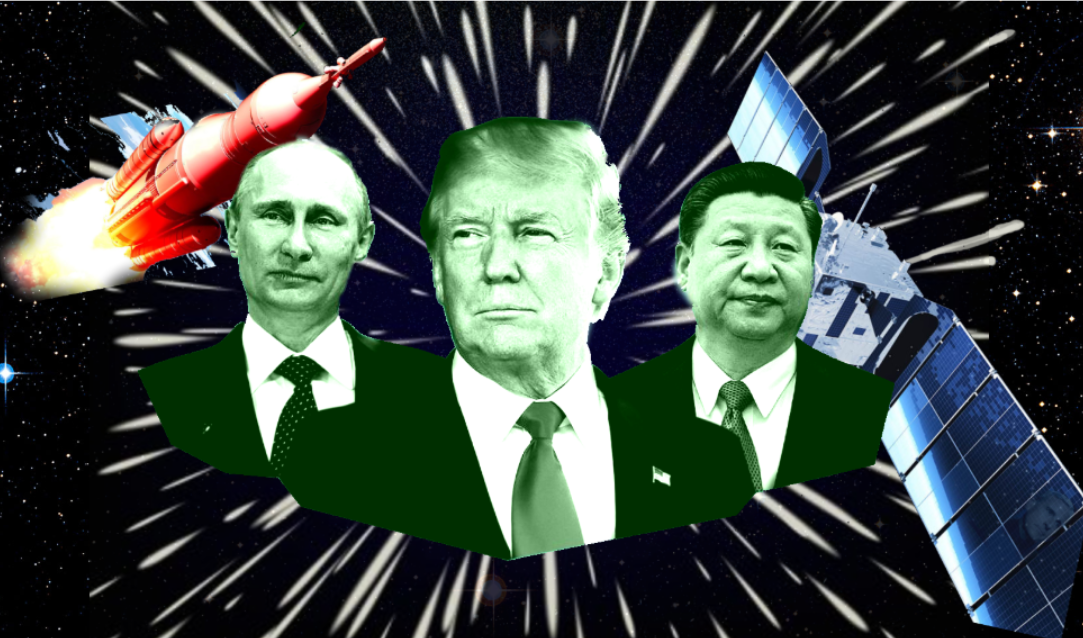 This article is the second of five pieces from our summer series for 2020. The theme this summer is “Challenging Narratives.” In the coming days and weeks, The Generation will publish more articles where our writers challenge various notions to provide new and different perspectives on the debates and events shaping your world.

Outer space has been called the “new frontier” since the 1960s, but today is being named the “new arena” for an arms race. With the United States, Russia, and China coming to a head in space weaponry and lacking cooperation on arms control treaties, the destruction of the “new frontier” amidst an arms race is increasingly likely and should worry the international community.

Each year, reliance on space-based technology for defensive and civil purposes increases dramatically. Among leaders and civilians alike, this has fostered the idea that space is a linchpin for bettering humanity. Since space exploration began in the 20th century, however, the attempt to protect space as a global good has been achieved with limited success. Conversely, states have been investing into developing space-based technologies that are congesting outer space and fueling a foreseeable and disastrous conflict.

In the world of arms control, the “security-insecurity paradox” is of chief importance here: it dictates that as one country secures itself through weapons or force, it conversely incentivizes other states to double-down on their measures to secure themselves. This is what leads to an arms race. Today, this has caused many observers to speculate that some of the world’s most advanced and deadliest weapons will be created in outer space.

The change in narrative on outer space can be broken down into three timelines: the 1950s Space Race, China’s entrance into the space arena in the early 2000s, and the 2019 creation of America’s Space Force.

Beginning in 1955, leaders of the Soviet Union and the United States would pit their engineers and astrophysicists against one another in a war of scientific achievement. Each nation having a penchant for success made significant breakthroughs: the Soviets sent the first satellite, animal, and man into space, while America was crowned victor ” of the race by landing the first man on the moon.

The race synergized space programs and the era’s political movements, effectively reinvigorating two countries following the tumultuous first half of the 20th century. Crucially, this enabled politicians to utilize space for political favorability by cultivating a sense of national superiority and using space as an emblem of strength and ingenuity. Space began to be viewed as the nexus of modernity and heroism, and became a durable platform for prosperity.

Different branches of the Soviet’s and America’s military were used to realize space exploration, from missile deployments for launching satellites to monitoring spacecraft. This is to say, since humankind’s first foray into the stars, space has always been militarized. Yet, it has not been overtly weaponized. John Logsdon, a space historian at George Washington University, commented that the difference in militarizing and weaponizing space is “a somewhat fuzzy line that has not yet been crossed.” This is largely due to the Space Age being incredibly fertile in producing new treaties, chief among them being the 1966 Outer Space Treaty. This is to say, the conflict that ensued during the Cold War caused an increase in international cooperation to form regulations preventing another arms race from occurring.

These agreements established a cultural taboo of deploying weapons in outer space. Though a convoluted flaw in this taboo is that it does not condemn a country for funding and manufacturing efforts to create space-based weapons. Indeed, that endeavor has become a marker for modernity and excellence because the overwhelming majority of states have not reached a level of technological advancement to create space-based weapons. The key takeaway from this era is the creation of a global acceptance of space as the vanguard for human longevity, the intertwining of space and politics, and the loophole enabling the blueprints for a future arms race.
.

When the Soviet Union was dismantled, the components of its original space agency were either shut down or reconstructed as private operations in the transition to the newly formed Russian space agency. At this point, Russia had taken a backseat in the militarization and weaponization of space. However, America’s blueprint for space weaponry continued and materialized in Ronald Reagan’s 1988 Strategic Defense Initiative, or “Star Wars,” which was designed to strike nuclear missiles from space. At a hefty cost of $170 billion, this initiative would have certainly enhanced the security dilemma by forcing other states to create their own anti-ballistic missiles. Ultimately, the SDI only served as a propaganda tool as the plan for its creation was eventually dropped. Following this, NASA’s funding started to significantly decrease and instead, the US private sector had heavily invested into space.

While funding for scientific improvement continued, competition remained relatively calm until 2003. A new-found urgency to resecure space came in the wake of China’s space agency, the China National Space Administration (CNSA), successfully launching its first crewed spaceflight. This made the CCP the third country in the world to send humans into space, challenging America’s preeminence in this field. Since then, the CPP’s capabilities have grown markedly.

The People’s Liberation Army steers the CNSA and ambitions a civilian expedition to the moon and a Chinese-built space station. Accordingly, China’s space activities function to uphold their national interests, with their recent plans outlined in their 10th defense white paper (DWP), entitled “China’s Military Strategy.” Published by the State Council Information Office and approved by the Central Military Commission, it details that China “implements a military strategy of active defence.” Since 2011, the CNSA has made significant progress on its space-based infrastrures to secure its economic and militaristic accomplishments, including taking necessary steps to launch high-density carrier rockets.

Xi Jinping is set on surpassing America as the dominant force in space. While the CCP may espouse peaceful rhetoric as they pursue what they’re calling “defensive measures,” their increase in satellites concurrent with their enhanced funding in space weaponry is leaving Washington officials worried. The Pentagon warned that China has created space-based anti-satellites aimed directly at America’s space infrastructure. What’s more, China is pursuing a broad range of confrontational actions, including creating electronic warfare weapons, such as lasers for blinding military imaging satellites and frequencing-interrupting technologies to obstruct satellite communication and GPS systems.

Accordingly, the US is viewing these measures as threatening, with the Secretary of Defense Mark Esper directly labeling China’s efforts as a textbook example of the “weaponization of space.” The US Space Command has emphasized its mission to “defend against and deter threats,” which, as the security-insecurity paradox that dominated the Cold War geopolitical landscape tells us, can be seen as teetering on the edge of a cosmic arms race.
.

The 2020 National Defense Authorization Act established the United States Space Force as the sixth independent branch of the military and currently the only independent space force on Earth on December 20, 2019. Its purpose is simple: provide and sustain space operations for America’s national security interests and deter aggression to, in, and from outer space.

As previously stated, since the start of space exploration, the “new frontier” has always been militarized, meaning President Trump’s militaristic mobilization is not novel by any means. However, the Space Force’s singular focus on space operations is what sets it apart and has, accordingly, sent China and Russia to the drawing board. The stakes are high: with China challenging America’s satellites, and America now doubling down and bolstering its own military capacity, worldwide communication and transport systems, which regulate hospitals, food, and water supplies, are at risk. Just as daunting, Russia has followed China’s lead in creating GPS and satellite jamming technology, ostensibly in the name of “defensive purposes.”

The reality is that all three goliaths – America, China, and more recently Russia – are combining their military endeavors with their objectives in outer space. Space has become not just a scientific waterfall, freeflowing with experimental capabilities and life-altering discoveries, but also offers attractive military advantages, most notably first-strike capabilities through the use of missiles.
.

It is too early to claim that the Space Force has disrupted peaceful space activities. But one thing is for certain: America’s Space Force will meet its Russian and Chinese counterparts in the coming years. As military history has shown, once one nation takes advantageous steps to defend itself, it simultaneously puts at odds other countries’ national security objectives and prompts a doubling down on endeavors to sway the advantage back in the threatened state’s favor. The Space Force, while most immediately a threat to China and Russia, is likely to create a domino affect, to borrow from the Cold War vernacular, by prompting Beijing and Moscow to construct their own space forces, which in turn will threaten the many nations currently seeking a claim in outer space, chief among them being India, Israel, Japan, and the greater European Union.

With the 1967 Outer Space treaty remaining the sole, overarching treaty in place, both the international community and the private sector are, on paper, more capable to curtail certain laws and regulations based on modern inventions omitted from this shamefully outdated treaty. The transition from the “new frontier” to the “new arena” for an arms race is increasingly likely, as the focus on space as an environment for scientific advancements has been taking a back seat to militaristic and hawkish endeavors. In the coming years, the United States, China, and Russia need to reposition and reevaluate their “defensive” actions while working alongside the international community at large to construct an up-to-date treaty on the uses of outer space. Additionally, following in the footsteps of nuclear-based treaties, the US, China, and Russia, as the world’s vanguards in space and military activities, need to construct a treaty regulating their military endeavors and improving confidence-building measures in order to protect one of the world’s most sacred and reliance-based goods.