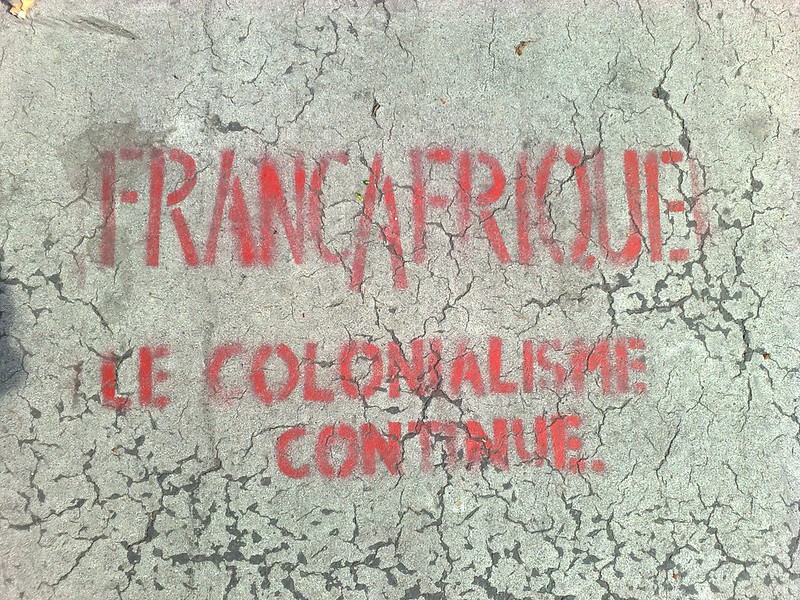 The era of what we referred to as ‘Françafrique’ is coming to an end. There is France and there is Africa. There is the partnership between France and Africa, with relationships grounded in respect, clarity and solidarity – Current French President François Hollande

With the official announcement of the replacement of the CFA franc by a new currency called “the eco” Saturday, December 21 2019 in Abidjan, French neo-colonialism of west Africa has run its course. France’s relations with Africa have been profoundly transformed in recent decades. Today they show little resemblance to the admittedly unhealthy relationship of the post-colonial years. The first Ivorian President Félix Houphouët-Boigny introduced the expression ‘La Francafrique‘ in 1955 to define the wish of some members of the African elite to maintain special relations with France after their independence. Since then, this term has been used several times in a pejorative meaning to describe French neo-colonial dominance in Africa. Today, the meaning of Françafrique is largely used to refer to France’s ‘sphere of influence’ in Sub-Saharan Africa hallmarked by its economic partnerships and military operations reminiscent of its colonial control of the 19th and 20th centuries. The nations within this sphere of influence have begun to separate themselves from the vestiges of French colonial control, but how France has maintained La Francafrique provides a rude awakening to the practice of neo-colonialism in modern times.

According to Franc Diplomatie, over a third of French exporters export to Africa.This skewed trading relationship is a legacy of French colonial rule and the special relationship it maintains with many of its former colonies. The CFA Franc is a modern symbol of this reality at play. The CFA Franc (African Financial Community or Cooperation Franc), created in December 1945 under the government of De Gaulle, is the last colonial currency still in circulation today. It is the common currency of 14 African States in Central and Western Africa (+ The Comoros) bounded by a policy of monetary cooperation incentivizing countries using the CFA Franc to give unrivaled market share to French imports. It is the French Treasury that guarantees the unlimited convertibility of the CFA Franc to the euro. In return, countries in the CFA Franc zone are required to deposit 50% of their foreign exchange surpluses into a French operations account. However, due to the fixed parity, countries that use the CFA Franc suffer from the highly valued euro and have difficulties exorting their goods. Consequently, La Francafrique nations have been economically bound to France until the announcement of “the eco” in late 2019.

However, while its economic influence wanes, France remains a major military force in sub-Saharan Africa. Today, France has a military presence in francophone areas of eastern, central, and western Africa, with a commitment of 8,700 troops, half of which are permanently stationed.  France maintains four permanent bases in Africa: Djibouti, Senegal, Gabon and the Ivory Coast, all being former colonies. Those forces have a strategic role, which is to protect France and its economic interests as well as intervene quickly when necessary. Emmanuel Macron, president of France, inherited two external operations in Africa and on several occasions has expressed the ambition, like Hollande, to continue them.  The first, Mission Corymbe, was originally aimed at preserving French oil exploitation and other economic interests in the Gulf of Guinea, but nowadays is intended to reduce maritime insecurity and  contribute to capacity-building in fighting piracy and illicit trafficking, for example by hosting naval exercises for navies in the region.  The second is Operation Barkhane, a counter- terrorist operation in the Sahel region. It was launched by Hollande in 2014, with a contingent of 4,000 French troops positioned in cooperation with the five countries concerned, all former French colonies: Burkina Faso, Mali, Mauretania, Niger, and Chad, a partnership known as the Joint Force of the Group of Five for the Sahel (G5S). Exactly how France’s military presence and engagements may evolve is not dependent on its will alone. With their operations, France has married its national interests with the stability of La Francafrique, justifying a military presence that would be observed as foreign occupation in any other context. With the emergence of a new generation of leaders in many African countries, it remains to be seen how political support for French involvement might evolve over time.

The nature of ‘La Françafrique’ has changed with the shifting economic and geopolitical realities over time.Even if relations between France and Africa are weaker today than they were in the colonial times, ‘La Françafrique’ is not completely over as François Hollande affirmed. Indeed, insofar as the CFA Franc exists and there remains excessive French military presence in the region, France has the means to interfere in African affairs. We cannot speak of an eventual end of ‘La Françafrique’. Africa and its resources are still a topical issue in French politics but more worrisome is the model Francafrique gives for other nations to create monopolistic control within the continent. Today France is facing growing competition from emerging powers, such as China, which has become the largest trading partner of the continent in recent years.In fact, Chinese firms are challenging French firms in development contracts, investment, and trade agreements. The announcement of “the echo” has caused the last dominoes of colonialism to start falling. For African countries, both within Francafrique, and the continent at large, France’s ability to control the affairs and destiny of a multitude of countries must be warning enough as the world looks to Africa again for their “national interests”.