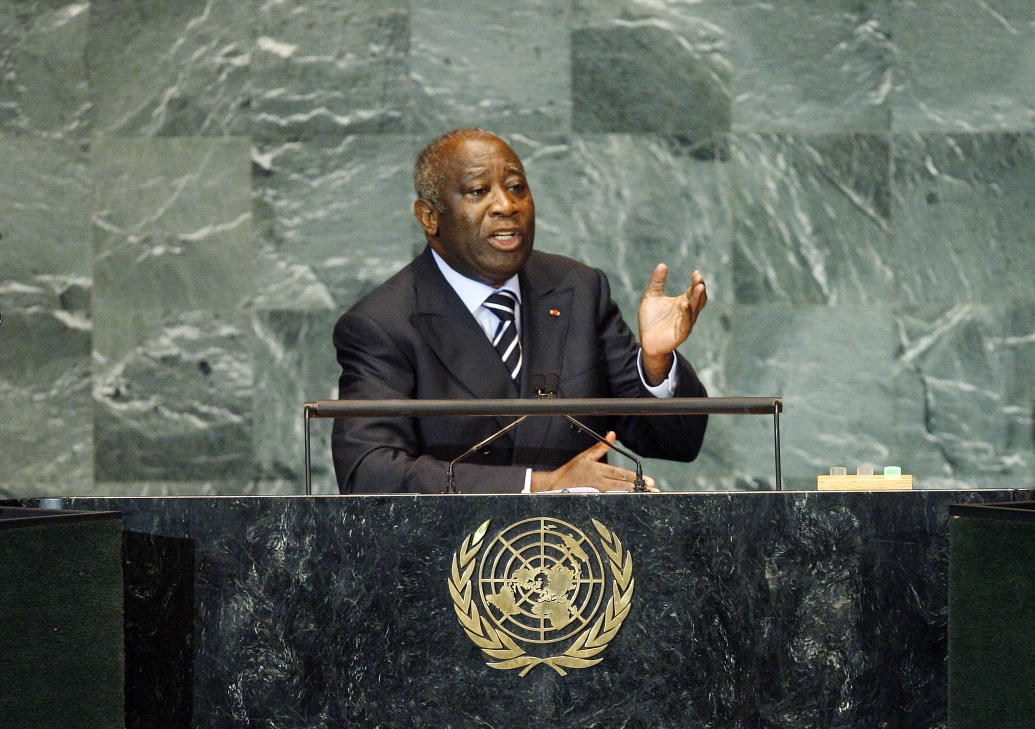 In November 2010 Ivory Coast President Laurent Gbagbo lost the presidential election to rival Alassane Ouattara in an extremely tight and fiercely contested race. Gbagbo refused to step down, denying the results of the election, while Ouattara, as well as the Ivory Coast’s Constitutional Council and international leaders, claimed Gbagbo had lost. The stand-off continued for months as violence spread in Abidjan, the nation’s capital. Gbagbo supporters were accused of murdering civilians from the opposition party and burning people alive, while others claimed pro-Ouattara groups also engaged in human rights abuses. By April of 2011 more than 3,000 people had died and claims of crimes against humanity surfaced in the international press. Soon after, Gbagbo was arrested and extradited to The Hague where he awaited trial at the International Criminal Court (ICC). This January, Gbagbo’s trial began and is still ongoing. Ouattara on the other hand, has not been charged, leading to pro-Gbagbo groups joining the chorus of critical opposition to ICC indictments, its current justice process and the court itself.

The Gbagbo case marks an integral test for the ICC’s effectiveness and legitimacy, as it exemplifies both the potential importance of the ICC in prosecuting heinous crimes and the problems associated with a supranational criminal court that tries individuals. The high-profile nature of the trial is also important, as it turns international media focus to the ICC and allows for a close inspection of how the court has evolved since opening in 2002.

The ICC–currently supported by 123 nations–was established through the Rome Statute with the mandate of prosecuting cases of genocide, war crimes, crimes of aggression and crimes against humanity. However, since 2002 the ICC has only completed twelve proceedings, resulting in two convictions. Gbagbo is the first former head of state to reach trial at the ICC, making this a landmark case for the court. The case’s high-profile status will test the ICC’s ability to act effectively and justly under intense scrutiny.

One of the most common issues surrounding the ICC is the possibility of political manipulation and unbalanced use of judicial power. The explicit purpose of the ICC is to fight impunity in cases of genocide or crimes against humanity; moreover, as a criminal court, it is also meant to prevent retaliatory vengeance by monopolizing legitimate justice. Gbagbo may have incited the violence in Ivory Coast by refusing to step down from the presidency, but the accusations that Ouattara groups also assaulted and murdered civilians shows that, in this instance, the ICC’s theoretical premise of preventing vengeance failed. The threat of punishment from the ICC did not stop Ouattara groups from attacking Gbagbo supporters. That being said, an increased efficiency in the court and the cooperation of international leaders in apprehending those indicted by the ICC may inhibit future groups from retaliating with violence. Prosecuting Gbagbo fairly, while also thoroughly investigating Ouattara and his actions in 2010-2011, would show the world there will not be impunity for similar crimes nor violent and heinous reactions from the victims.

Critics of the court, including pro-Gbagbo groups, also cite imbalanced investigations and prosecutions, as well as negative African bias. So far, the ICC has failed to adequately investigate Ouattara’s influence on the unrest, even as news reports claim both Gbagbo and Ouattara’s forces perpetrated extreme violence in the months following the presidential election in 2010. In this vein, the court is caught between domestic groups hoping the ICC can provide justice and others, such as African leaders, who critique neocolonial tendencies and bias. The Gbagbo case also continues the ICC’s questionable record of only indicting Africans, which must change. Much of Africa is mired in violence, as seen in the cases of Joseph Kony and others, but there are many conflicts outside the continent that deserve equal investigation. For instance, there is much evidence that Bashar al-Assad’s regime perpetrated crimes against humanity in Syria. France is currently investigating Assad’s possible war crimes, though it would show a strong commitment to unbiased justice if the ICC were to indict him as well. Each of these elements fuel claims that the ICC lacks legitimacy as an impartial justice institution.

The Gbagbo case alone will not solve these issues but a focus on thoroughness and unbiased justice for all those involved, as well as others in similar conflicts, will create an opportunity for legitimacy. Each of the previous critiques is important and relevant, yet they must not spell the closing of the ICC. Here, the importance of Gbagbo and the Ivory Coast becomes evident. Gbagbo’s trial is an important first step toward justice for those involved in the violence in Ivory Coast but it is only the beginning of a long process. The ICC’s investigation into possible violent crimes by Ouattara and his supporters groups is ongoing; investigations that involve issues of national sovereignty or that scrutinize governments currently in power are time-intensive and must be treated with patience.

Although the ICC’s negative African bias should be criticized, the court only has a short history of indictments. The method and focus of their investigations can easily be changed to incorporate trends of equality and objectiveness regarding who is charged and tried. Laws that are enforced unevenly are often illegitimate and discriminatory, which makes it imperative that the ICC broaden its gaze beyond Africa. Indicting Bashar al-Assad would be a promising step forward, showing the ICC’s commitment to equality under the law.

The ICC’s implicit narrative of vengeance prevention should also be looked at from a broader, long-term perspective. Many cases of crimes against humanity or genocide stem from intra-state conflicts or civil wars. The court will not be able to stop violent acts of retaliation by immediately indicting and trying national leaders. If the ICC gains legitimacy and more countries sign the Rome Statute, retaliation by victims in these horrific instances may be prevented. As the ICC grows into a meaningful supranational criminal court, its full body of work and unbiased effectiveness in prosecuting violent criminals should provide these incentives against vengeance. Victims of heinous crimes will feel confident that their persecutors will be brought to justice and will not think it necessary to seek out individual revenge. The successful prosecution of Gbagbo and a non-partisan investigation of Ouattara’s actions may be the first step in ending any future attempts at retribution.

The Gbagbo case allows the ICC an opportunity to prove to the world that it has grown and evolved over the past fourteen years. The international community must also pay attention, without focusing on the court’s failures or shortcomings. We must instead comment with a critical eye and support change that will allow the ICC to be more effective and just. The ICC is unlike any other criminal court or international institution created and it is still in its earliest stage. In order to reach the ultimate goal of denying impunity to warlords and leaders who commit crimes against humanity, the court must be allowed to push through growing pains and mold itself to the nuances of the world in which we currently live.