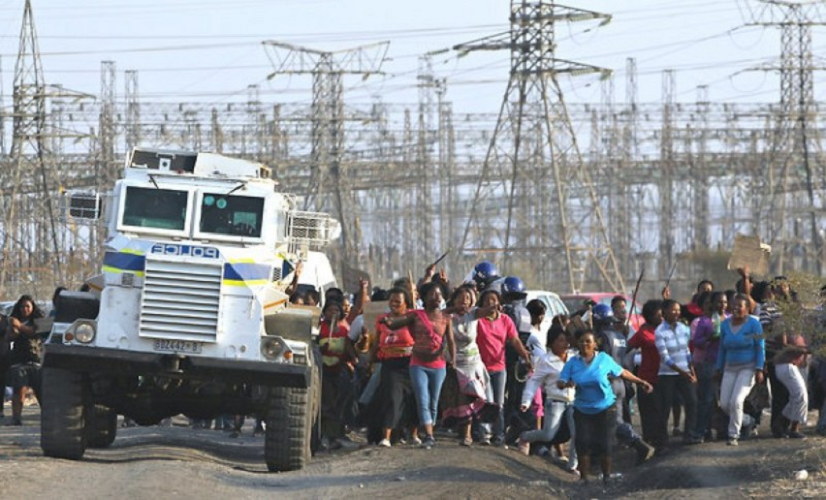 A country known for its brutal apartheid policies from 1948-1994, South Africa is still reeling from Thursday, August 16th’s violent episode between police officers and striking miners. Specifically, police officers resorted to the use of barbed wire to contain the miners, followed by tear gas, stun grenades, and firearms to disperse them. The Marikana mine where the strikes have been occurring for over a week is operated by the world’s third largest platinum producer, Lonmin, and currently employs roughly 28,000 people. Of the 28,000 employees, 3,000 have been a part of the ongoing strikes. While many following the story sympathize with the police’s use of force and claim it was a necessary response to the striking miners who were waving machetes, few are digging deeper to better understand why the Marikana miners felt it was necessary to carry machetes while striking.

With wages at just $9,000 per year (or a monthly wage of $400-$600), it hardly comes as a surprise that South African miners, including those at the Marikana mine, would seek wage increases that place them closer to Australian miners’ $110,000 a year salaries. Consequently, South African miners have sought help from both unions present – the dominant and older National Union of Mineworkers (NUM) which has ties to the current administration’s African National Congress, and the increasingly more appealing Association of Mineworkers and Construction Union (AMCU) who often uses aggressive tactics to win wage increases. Both unions, however, are fierce rivals who often let politics trump the miners’ best interests.

Although carrying machetes seems unnecessary, to the Marikana miners on strike, if waving machetes meant a better chance of securing higher wages at their job, then it was most likely viewed as a vital step to take, especially if the move was supported by the AMCU as reports suggest. Additionally, the deadly police violence against miners at Impala Platinum mine in February, which resulted in a 125% increase in wages, potentially served as another reason and possible catalyst for the Marikana miners’ behavior.

It would seem natural, then, that when negotiations between Lonmin, the miners, and the two unions fell through in the days leading up to the August 16th killings, the miners used their machetes to hack two police officers to death out of frustration and because of AMCU involvement. The violence that erupted on August 16th, which left 34 miners dead and 78 wounded, also started after another round of negotiations failed.

The violence, however, has not merely affected those living in South Africa, but has also had an impact on international diplomacy and trade. Because Lonmin is a London-based mining company, it must now undergo damage control to not only repair its image as a company, but to ensure that management practices, like determining employee salaries, do not echo Britain’s colonial policies. If such a connection between the Marikana mine violence and apartheid policies becomes widely accepted by the public, both the British and South African governments will be forced to reevaluate their diplomatic relations. Additionally, because of the Marikana incident, Lonmin shares fell by 8% between August 16th and 17th and by over 12% since the violence began. International platinum prices additionally reacted to the violence by rising 4% the following day, showing just how easy it is for a national dispute to become a concern for global markets.

Even though the use of violence for personal gain is never justifiable, by ignoring the circumstances leading up to August 16th’s deadly strikes, people wrongly place sole blame on the South African miners and police officers who were directly a part of the violence. By doing this, people ignore companies like Lonmin and miners unions who purposely underpay their employees in order to increase their profits. Critics, therefore, should not be so quick to place blame, especially when so many of those bearing the brunt of it all are still grieving from the loss of loved ones. Instead, critics should demand South African policymakers create better practices for mining companies and unions so that mining employees will no longer desperately resort to violent protests to gain better benefits and working conditions. Doing so will not only protect the miners, but will also prevent another unnecessary disturbance to the global order.

Facts and figures obtained from CNN, BBC News, and The New York Times.