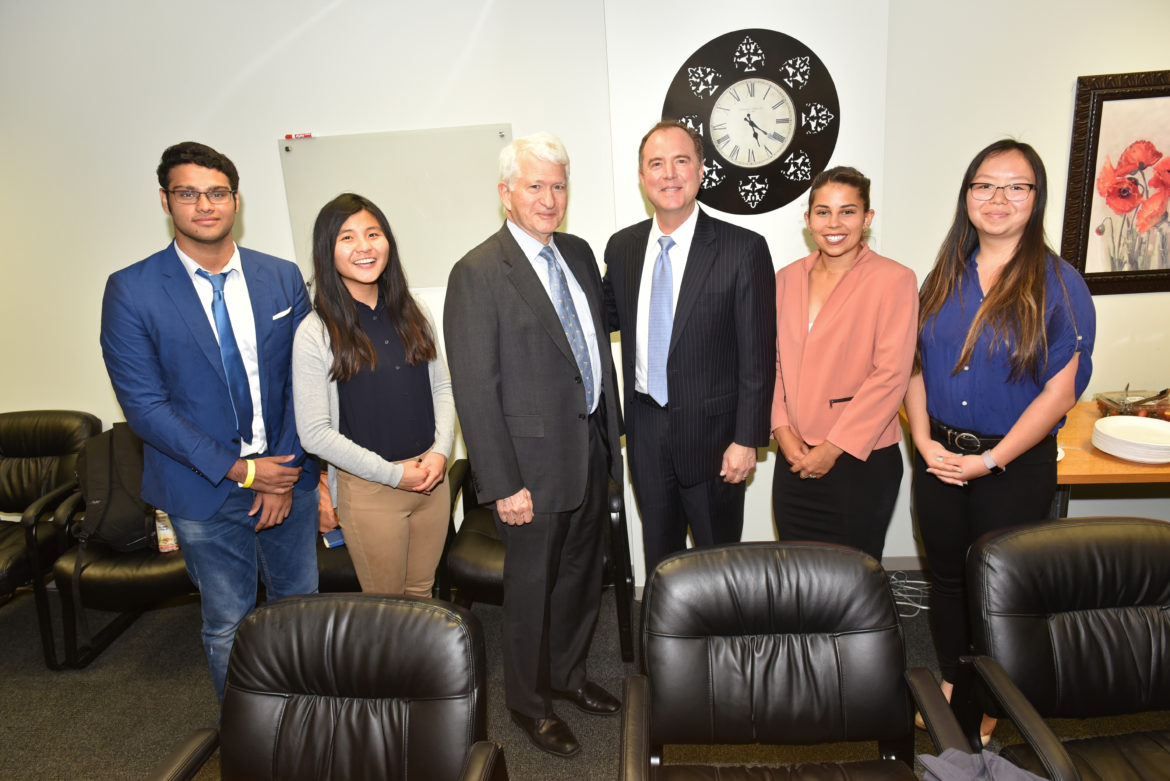 Congressman Adam Schiff came to UCLA to give the Bernard Brodie Lecture on the Conditions of Peace on May 31st of this year. Before the lecture, members of The Generation were fortunate enough to sit down with Congressman Schiff and ask him questions about the House Intelligence Committee- of which he is currently the Ranking Member- his responsibility to his constituents and the American people, democratic institutions and the rule of law, and the reputation of the United States internationally. He echoed and elaborated on many of these topics during his lecture and audience questions, which we were also able to attend following the interview. While there has been a summer that has past since the time of interview, many of his comments remain relevant as we’ve watched President Trump’s antics unfold over the past few months.

Congressman Schiff has a great sense of humor. He began the lecture by telling an anecdote about when President Trump called him “sleazy”. Schiff said that he felt the need to explain to his son what had happened in case the other children at school talked about it. He told his son that “the President called your dad sleazy”, and his son, wholly unconcerned, replied, “Can I call you sleazy?”  Congressman Schiff used humor frequently throughout his lecture to highlight the absurdity of some of the administration’s recent actions, such as President Trump calling Vladimir Putin to congratulate him on his win. He even went so far as to mimic how that phone conversation might have gone, which had the entire audience laughing.

In the interview with us, however, Congressman Schiff’s tone was markedly more serious. We began by asking him about the partisanship on his committee in the House of Representatives, which is the House Select Intelligence Committee. The committee has been charged with conducting an investigation into Russian interference in the 2016 presidential election and possible connections between President Trump and members of his team and Russia. Despite the traditionally bipartisan nature of the Intelligence Committee, Schiff noted that one particular instance- what he called the “midnight run“– which divided the committee along partisan lines. The “run” occurred in March of 2017 when Republican Chairman Devin Nunes went to an undisclosed location to reportedly receive classified materials unmasking a conspiracy that claimed that the Obama administration had done surveillance on members of President Trump’s transition team. Nunes then went to the White House to present this evidence. However in a matter of days it as revealed that the supposedly undisclosed location was the White House. Schiff states, “But we learned within a matter of days that in fact the secret location he had gone too had been the White House and the materials he had received were from the White House that he was presenting to the White House.That kind of blew up the investigation because it became clear that the mission for the chairman was to protect the President at all costs rather than doing an objective investigation. The incident troubled Schiff for illustrating Nunes’ blatant disregard for the committee’s constitutional duty and for demonstrating the vastly different goals of its members.

We then asked Schiff what would change on his committee if Democrats win a majority in the House in the upcoming midterm elections and he becomes chairman. His first priority, he said, would be a return to “comity” on the committee, and blames the current chairman Nunes’ divisive actions for the current level of partisanship. When asked a similar question during the lecture, Schiff responded that he would like his committee to “get back in the oversight business”. Based on some recent special election results, Schiff may get his wish for his committee from the midterm elections. In a recent special election in Ohio, the vote came down to closer than 1 percent in a district that has had Republican representation in Congress for 35 years, the past incumbent consistently cruised to victory by 10 percentage points, and where Trump beat Hillary Clinton by a whooping 11 percent. These election results, while not representative of the entire nation, have led many to predict that Democrats may shortly regain the majority in Congress, making Congressman Schiff the leader of the House Intelligence Committee.

On a different note, one idea that Schiff kept highlighting throughout both the interview and his lecture was the breakdown of democratic institutions and the rule of law, and how this is affecting the U.S.’s reputation and negotiating power abroad. Schiff even went so far as to say “I think that the health of our democracy is very much at risk”. He mentioned numerous examples that ranged from President Trump’s tendency to ban reporters from news outlets he doesn’t like such as the New York Times and BBC from press briefings, to discussing the possibility of him pardoning himself for any possible crimes he may be charged with in the future. Additionally, the president’s constant Twitter tirades about the “fake news” press and special counsel Robert Mueller’s Investigation have led many of his supporters to distrust both the press and the Justice Department. The United States was downgraded from a full to a flawed democracy by the “Economist Intelligence Unit” the year Trump came into office, and has remained in the flawed category for its 2018 ranking, currently ranked 21 out of 167 countries for its democracy score. It seems as though Schiff may well be justified in worrying about the state of our democracy.

On a similar note, Schiff also noted his concerns with the way the rest of the world currently views the US, stating “our America first and everyone else be damned has really left us isolated and the rest of the world deeply concerned”. As evidence, he cited examples of this poor perception of America from our allies such as a Politico article titled “Leader of the Free World meets Donald Trump” referring to Angela Merkel, and Trump’s decision to pull out of the Iran nuclear deal. Since this interview, President Trump has continued to take actions that worry world leaders and isolate the U.S. on the world stage, such as placing tariffs on Chinese and European goods against the advice of most of the world’s economists and Trump’s troubling actions during and after June’s G7 meeting such as arriving late for the first meeting of the conference and acting outraged at Prime Minister Trudeau’s easily predictable retaliatory actions to Trump’s steel and aluminum tariffs. Congressman Schiff stated in the interview that “It’s hard to imagine a time when the United States has been held in lower regard around the world than right now”, but after Trump’s antics this summer, we may be even lower in the opinion of the world than we were in May when the interview was conducted.

This interview was conducted shortly before the first North Korea negotiations had occured. Congressman Schiff was glad to hear that the negotiations were back on after being canceled for a spell, but was concerned with this administration’s approach to North Korea, calling it “erratic and at times dangerous”. He warned that North Korea’s nuclear program was not going to be an easy problem to solve stating, “If it were not a hard problem, it would have been solved by any number of presidents in the past”. This statement has proven to be true since the interview. While President Trump and Kim Jong-Un did sit down for negotiations in June, the joint statement that came out of this was widely criticized as vague. President Trump conceded an important bargaining chip by agreeing to give up military exercises in South Korea while gaining no time table for denuclearization from the North Korean leader. Additionally, on August 24th President Trump called off talks between North Korean leaders and his Secretary of State, Mike Pompeo, citing concerns that not enough progress has been made in regards to the country’s denuclearization. Congressman Schiff’s warning has proven true; it seems that the problem of North Korean denuclearization has shown itself to be trickier than President Trump first believed it to be.

In a time where dishonorable behavior has come to be expected from the current administration, the political backbone displayed by Congressman Adam Schiff was refreshing. He asked his audience “What’s the point of being there [in Congress] if you’re not going to do what the country needs you to do when they need you to do it?” At one point during the lecture, he received an spontaneous round of applause from the audience after declaring he believes politicians should “do the right thing and still find a way to get reelected”.

It was a pleasure speaking with the Congressman and listening to his lecture, and it will be interesting to witness any potential changes within his Committee following the November midterm elections. 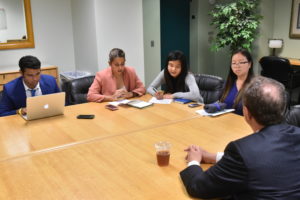