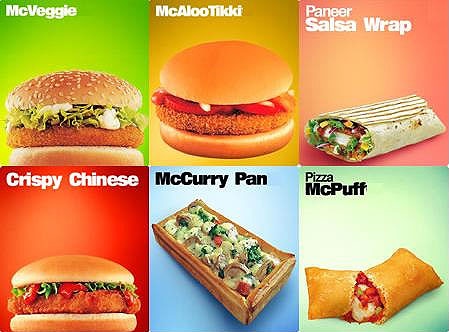 In the summer of 2019, McDonald’s debuted a special international menu with four delicious fan favorites from abroad in participating U.S. franchises. Stop and appreciate what an oddity this is. How can a brand so quintessentially and aggressively American return home with a menu that is unapologetically foreign? However, this product promotion presents an opportunity to reframe our perception of the corporation— and rightfully so. McDonald’s characterization as absurdly American may be an oversimplification of what is actually a complex and shifting identity. Yes, McDonald’s is classically viewed as, and has historically functioned as, an agent of America and Americanization both at home and abroad, but what exactly about America McDonald’s is conveying and how this message has evolved with time is still up for debate.

When McDonald’s first opened in San Bernardino in 1948, it was the first restaurant to apply the assembly line production model to food service, and in doing so changed the American dining experience forever. McDonald’s expanded rapidly by serving reliable, delicious, standardized and commodified food and as such came to represent innovation and progress, in a significant sense mirroring the larger success and prosperity of the United States throughout the 1950s and 1960s. McDonald’s then exploited this ultra-American image they had been instrumental in creating, in their “United Tastes of Europe” Campaign; the corporation’s first big push into the international market in 1970s.

In 1990, McDonald’s made another big step, this time into the communist U.S.S.R.. The employees at the Moscow McDonald’s were trained in the traditional American style of hospitality, and eventually even told to smile less to fit in better with local customs. Nonetheless the Soviets loved McDonalds, it softened their views towards America after lifetimes of Anti-U.S. propaganda. This is not the first, or by any means the last example of this phenomenon either.

Unfailingly, in countries with limited contact or ideas about the United States, the initial impression left by McDonald’s has ultimately been very positive. The dining experience legitimately promotes lovable liberal values like democracy and accessibility in small yet significant ways. McDonald’s champions democracy by responding to the local tastes and preferences of customers around the world. For example, in India McDonald’s does not serve beef and offers many vegetarian options in order to accommodate Hindu preferences. In France, McDonald’s has acclimatized to the French cafe model by making restaurant seating areas more warm and inviting. Cultural modifications like these demonstrate to consumers that their thoughts-and purchases- will affect change, which can be a revolutionary notion for the world’s politically oppressed. McDonald’s additionally encourages accessibility in the equalitarian nature of the dining experience. No matter your individual economic status you’ll get the same big mac- it’s an inherently populist meal. McDonald’s promotes ideas of efficiency and standardization through the quick service assembly line model, and American congeniality in their aforementioned ‘service with a smile.’

McDonald’s ability to capture and perpetuate these American values, is in some sense a precursor to a larger acceptance of western values and ideals. Herein lies the essential purpose of soft power: to introduce America abroad in a lighthearted and inviting way that may ease relations and create a sphere of influence. McDonald’s, along with other leviathan corporations like Coca-Cola, are tasked as a sort of trojan horse for American cultural imperialism. They distill ideas, distinct but similar, that together culminate into brand America, a stepping stone on the way to capitalism and globalization.

This process may sound overbearing or invasive, and it may be, yet aspects of it are also mutually advantageous. Consider economist Thomas Friedman’s Golden Arches Theory of Conflict Prevention: that no two countries with McDonald’s will ever go to war. The theory is imperfect, but it’s logic is infallible.When two countries both participate in the free market they inherently have a degree of economic integration and a shared interest in prosperity that greatly discourages conflict. And it is not just America that engages in this system. Other nations are quick to grasp at the opportunity for economic growth. According to former McDonald’s International Chief James Cantalupo there “wasn’t a country that they haven’t gotten inquires from;” illustrating the inflated extent to which McDonald’s represents America abroad.

Association with American identity has been very advantageous for the corporation’s growth, but it is a double edged sword. McDonald’s was attacked, rather than the American embassy, by anti-American interventionism protestors in Chile. McDonald’s was removed from Iran during the Islamic Revolution of 1979. All three McDonald’s locations in Crimea were shut down following Russian annexation in 2014, and the list does not end there. These rejections are clear cut. They are based on fundamental disagreements with American foreign policy. Yet there is another more nuanced faction of dissent against McDonald’s and what it represents in America as well as other western nations. These viewpoints signal a shift in the way people want their countries to behave and to be viewed.

In 1999, McDonald’s Millau was disassembled as a statement in the “fight against free trade global capitalism.” The movement was led by French politician José Bové, who along with other anti-globalists were disenchanted with what they viewed as the homogenization of food and culture. Yet the closing of other McDonald’s locations in France has met resistance amid claims that they provided jobs and, more importantly, a sense of community for immigrants. This perhaps reveals the dissonance between those with privilege that speak for workers and the actual material needs of workers. For many socially disenfranchised groups, including the homeless, elderly, and low income, McDonald’s provides a refuge in a society that is leaving them behind. McDonald’s offers seemingly insignificant services that are important to people, such as affordable coffee, clean bathrooms, access to electrical outlets and permittance of patrons to stay for extended periods of time. It is an accessibility that is taken for granted by more privileged groups. The disdain that some in such groups show to McDonald’s is at least to an extent exemplative of the marginalization of poor narratives rather than simply the fight for economic and cultural justice. This is not an exoneration of McDonald’s by any means but an attempt to bring awareness to a portion of the prejudice that clouds the conversation.

There are valid criticisms. The critiques of the corporation reflect larger issues facing the United States such as unchecked corporate power, environmental degradation, and quality of life. These criticisms have been effective at forcing the company to make positive changes such as more sustainable meat production and the introduction of healthier menu items. However, the substance and validity of these claims, or lack thereof,  is ultimately irrelevant. What is important is that they have affected McDonald’s reputation and thereby representation of America. McDonald’s reputation has been continuously tarnished and there is growing disillusionment with the brand. The same could be said for the U.S., that things have grown more politically and socially contentious. That less people believe in the feasibility of the American dream. And while some of these changes are undoubtedly negative, maybe a little loss of ego can be seen positively, as “America too” rather than “America first.”

McDonald’s importation of foreign menu items into the United States represents a stark shift: from cultural imperialism to syncretism. A shift from American domination in international relations, to many nodes of power radiating from Beijing to Rio to Sydney. McDonald’s is an exemplary corporation in this regard because it has adapted to the times. It responds to customer desires and changing markets, whether that means giving an organic option or introducing food delivery. It is also willing to adapt and learn from other places. Like taking the European six to eight week menu cycle for products. Maybe this is what we as Americans should learn too. To be proud, to promote what we do best, but also to listen, learn, and not be afraid of change.