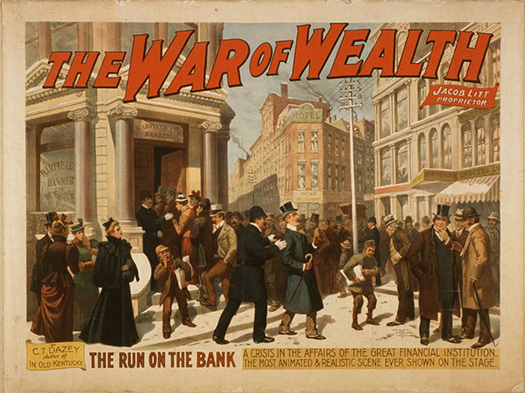 There’s No Positive Side to Negative Interest Rates

Every day, week, month, and year, the money in your bank account loses purchasing power due to inflation. This means that if in 2019 you had $100 dollars to spend on goods, in 2020 you would need $101.90 dollars to buy the same amount of goods. This difference may seem insignificant but it becomes much more relevant when you apply it to large sums or consider that inflation compounds annually. But wait, you may ask, isn’t this canceled out by the interest that you earn on your money in the bank? The average interest rate paid by banks on savings accounts in the United States is 0.09%, which unfortunately does not make up for the 1.9% you lose with inflation (The Fed target is 2%- read more about why a little inflation is optimal here). Yet, soon this abysmal 0.09% interest rate might not look too bad– in light of potential negative interest rates.

A negative interest rate entails an inversion of the banking system as we understand it today. Instead of banks paying savers interest to hold their money, they will charge them. And instead of banks charging interest to borrowers, they will pay them to borrow money. The logic behind this is that it will encourage borrowing and discourage saving, which will stimulate economic activity through increased investment.

How Did We Get to This Point?

Negative interest rates are introduced to kickstart very depressed economies that have too much saving and not enough spending. This “savings glut,” as it is often termed, seems to be the new normal for advanced economies like Western Europe, Japan, and to a lesser extent the United States— for several reasons. First, aging populations mean that there’s more saving and investment in retirement funds, as well as, in some countries, a decrease in the working age population. Additionally, wages are not keeping pace with economic growth, meaning that there’s a poor distribution of money in the economy. Instead of money being in the hands of lower and middle income consumers, who have high propensities to consume, money is increasingly concentrated in corporate profits and with high income consumers, who have relatively low propensities to consume. Essentially, rising income inequality is depressing demand and thereby contributing to the need for negative interest rates.

Countries like Switzerland and Japan are also attracted to negative interest rates to pull down the value of their currencies. Lower interest rates are linked to currency depreciation which is necessary to counteract their current and historical overvaluations. The Swiss Franc and Japanese Yen have become overvalued because of their reputation as “safe haven” currencies, meaning that they are safe and stable currencies to hold during economic downturns. This damages their respective economies because high currency valuations make exports more expensive, hurting their competitiveness on the international market.

Intuitively, the economics and reasoning behind negative interest rates checks out; yet, nations that have already instituted these measures have seen unexpected results materialize. Denmark, Sweden, Switzerland, the Eurozone, and Japan implemented negative interest rates between the period of 2012 and 2015.  Yet despite this radical step, they still suffer from stagnation and are now discovering that reversing these rates is near impossible; all of the aforementioned nations still have sub-zero rates. The only reason there hasn’t been a more complete financial breakdown in these foreign economies is their heavy investments into higher yielding U.S. securities. In turn, these investments have appreciated the value of the U.S. dollar, making exports less competitive and increasing the trade deficit. The trade deficit is one of the primary reasons why President Trump has been consistently pressuring the U.S. central bank, the Federal Reserve, to push rates down to zero or even negative. Additionally, there is a controversial idea that the astronomical U.S. debt of $22 trillion dollars could be refinanced at a negative interest rate.

The Federal Reserve has yet to cave to the demands of President Trump and is able to maintain this position because of its political independence. Despite three rate cuts in 2019, the Fed has indicated that they will be holding rates constant at 1.50- 1.75% in 2020. However, prevailing conditions in the global economy may force the Fed to push rates down. Worldwide, interest rates today are at record lows despite great economic growth and prosperity. Unfortunately though, this means that when we eventually do enter another recession, and actually require the stimulus that low rates provide, the only way to produce it will be for interest rates to go negative.

What Does This Mean for Consumers?

So far, negative interest rates have primarily affected banks. The negative interest rates imposed by central banks apply to the rate banks earn (or are charged) when they hold excess funds with a central bank or make interbank loans. Banks being charged to hold money at the central bank does not seem necessarily detrimental to consumers as long as they are still paying interest to account holders. However, many banks that have had to do this, have had their profits choked, and as a result have passed on some of the costs to account holders.

Banks in Switzerland, Denmark, and the Euro zone started by charging wealthy savers negative interest, like a quasi tax, to keep their money in savings and checking accounts. At first, banks like Jyske Bank in Denmark were charging individuals with over the equivalent of 1.1 million USD interest on their savings, then this was halved by UBS Switzerland’s charges beginning at the equivalent of $560,000 USD and account balances have continued to creep down from there. Today, at German Bank Volksbank Fürstenfeldbruck, negative interest applies to all accounts, of any balance. As a result, there have been calls for the German government to guarantee that anyone with 100,000 Euros  (the equivalent of approximately $110,000 USD) or less in their account be protected from negative rates. In all fairness, most banks that charge negative interest do not begin until a balance of at least 100,000 Euros. However, considering the cost of living, this balance is still far too low and disproportionately disadvantages the middle class and retirees.

What can an individual account holder do to protect their savings? Most people’s first reaction is to withdraw funds from the bank and hold the money in physical cash. Mass withdraws are a distinct possibility from the policy and will likely prevent interest rates from becoming significantly negative (below -.5% or -.75%). However, holding money in physical cash or other commodities like precious metals has low security and gives savers a low yield.

The question that remains is how to possibly find at least moderately yielding assets or even possibly take advantage of negative interest rates. Based on a rudimentary understanding of economics and finance, I propose these theories for navigating the brave new world of negative interest. Please note I do not accept liability for any losses that may be incurred.

First, let’s talk about where not to invest. All the traditional avenues of investment, while still great options, are currently overheated as people search for stability. The stock and real estate markets are both popularly understood to be overvalued at the moment, yet if you believe that we are in a “rational bubble” this may still be a good investment. The bond market on the other hand is showing historically low returns. The German government recently released 30-year negative yielding bonds, which if held to maturity guarantee to pay back less than they were purchased for. However if you are extremely pessimistic about the market, these bonds may be a good investment for resale, under the logic that assets will have even lower yields in the future.

Yet, there are some investments that may not only remain viable, but actually improve with negative interest rates. One of these investments entails trading in the foreign exchange market. Money can be made in the forex market when there is dissonance between interest rates and exchange rates, which according to the idea of interest parity must be symmetrical to prevent arbitrage. However, in actuality, interest parity does not always hold, making arbitrage possible. For example, investors have historically made profit by taking out a very low interest rate loan in Japanese Yen, converting the Yen into a higher yielding currency such as the Australian Dollar, and lending money in a high rate loan with Australian Dollars. Then the investor can pay back the loan with the same principle and the profit will be the difference of interest rates. Between April and June of 2018 this Yen “carry trade” earned investors a profit of 4.5%.  Now imagine how these profits could grow even further if hypothetically negative interest rates on loans were extended to everyday borrowers. Instead of earning the difference between the rates, one would earn the sum. However, currency speculation does have ethical implications, as when conducted on a large scale it can lead to recession. For example, in the Black Wednesday crisis of 1992, George Soros profited $1 billion dollars, but at the expense of the British economy, which entered into a painful recession.

Another good avenue for investment could be shorting bank stocks. As aforementioned many banks are struggling to pay both interest to the central bank and to account holders. This is of course especially pertinent in European banks where negative interest rates are already in effect (in opposition to U.S. banks, where negative interest is still only hypothetical). It especially affects banks whose sole operation is European, while banks like the Spanish Santander still see growth in their Latin American operation. In my opinion, the best stock to short is pitiful giant Deutsche Bank, which has shown sorry financials for the past decade and limited signs of improvement. Deutsche Bank, along with other struggling European banks, are beginning to close branches and conduct layoffs, with even more cutbacks likely to follow as rates continue to drop.

Finally, one can choose to opt out of the Western banking system altogether, and this does not just include living off the grid or buying Bitcoin. An increasingly attractive alternative is Islamic finance. Islamic finance is banking in accordance with Sharia law, which means no interest can be solicited. Alternatively to interest, there is a flat sum charged or a “profit/risk sharing” scheme established. As such, the Islamic market cannot be affected by negative interest rates in the same way as Western markets, and thereby may be becoming a more profitable investment. Moreover, the Islamic world is not facing the same economic issues as the West, and in many cases has opposing problems. For example, inflation and unemployment in Islamic markets is typically high, similar to the United States in the 1970s, but the opposite of the United States today. Islamic nations are additionally not facing the same underlying demographic issues as the West, which further discourages the implementation of negative charges. However, the global markets are very integrated so ruling out a negative flat sum is not possible, especially for currencies that are pegged to the U.S. dollar, which greatly complicates matters. Yet, the entire issue, through all the aforementioned investment options, reinforce that emerging markets are likely the global way forward.

The best possible solution to negative interest rates would be for governments to work on the underlying problems that originally necessitated them. How this should be achieved is politically divisive, but popular ideas include increasing immigration to mitigate aging populations and increasing corporate taxes to fund increased government spending, which would then increase demand across the economy. Negative interest rates were originally imposed as an emergency measure- what does it say about our economic future that this state of emergency may be permanent?