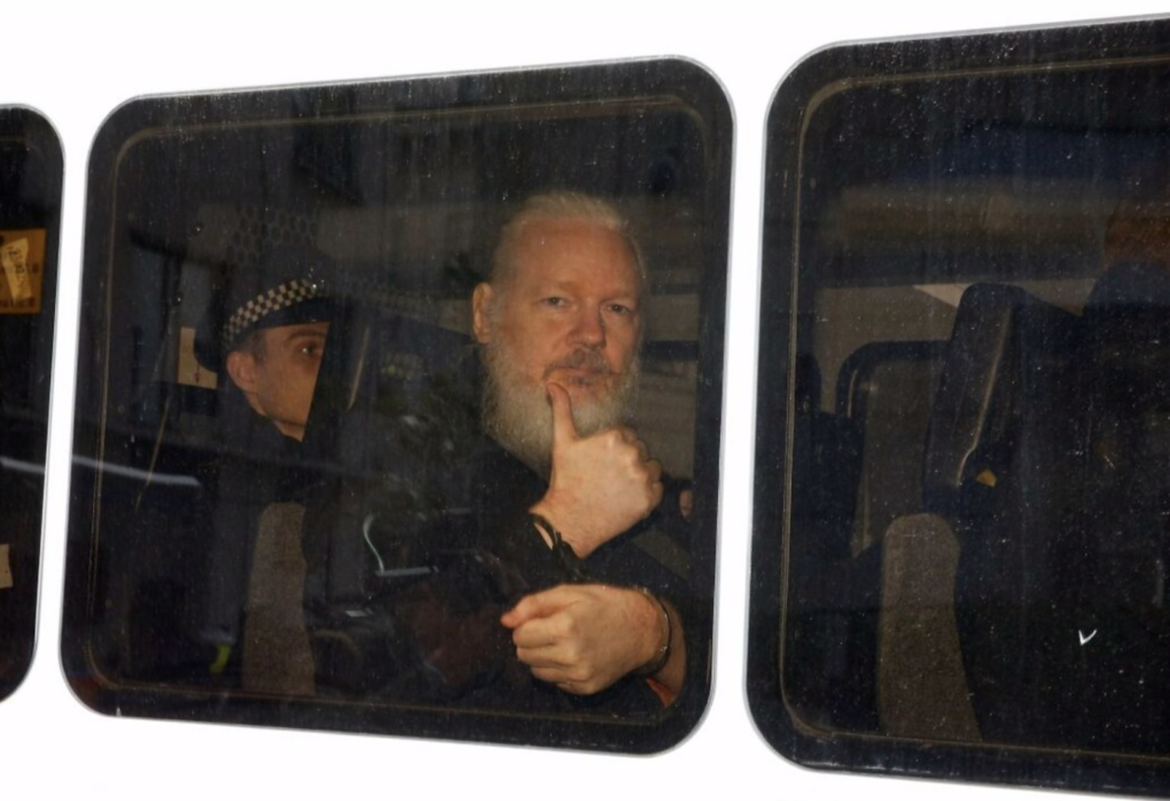 On April 11, 2019, Julian Assange left the Ecuadorian Embassy in London for the first time in seven years. He didn’t leave of his own volition; he was dragged out by the Metropolitan Police for failure to surrender to court in 2012 in connection to sexual assault charges he was facing in Sweden. Although those charges allowed the authorities to apprehend Assange, they are just a sliver of the international attention he has drawn. Assange has described himself as “the heart and soul of [Wikileaks], its founder, philosopher, spokesperson, original coder, organizer, financier, and all the rest.”

His prominent role within Wikileaks seems to be the only thing on which people can agree. Some call him a whistleblower and request that his right to free speech be protected. Others condemn his actions, such as Secretary of State Mike Pompeo, who in 2017 called Wikileaks, “a non-state hostile intelligence service often abetted by state actors like Russia,” based on the belief that the release of classified documents by Wikileaks has repeatedly undermined US National Security. Assange made himself an enemy of the United States Government after releasing the “Collateral Murder” video that showed US soldiers fatally shooting 18 people, among them journalists and civilians, in Baghdad, Iraq. Assange identifies as an advocate of information transparency and market libertarianism. As difficult as it is to find an objective truth in these various understandings of Mr. Assange, his status in the international community is even more complex.

Born in Australia, Assange was hacking under the name “Mendax” by the age of 16. In 1996, he was charged with twenty five counts of hacking and related crimes, and faced up to a ten year sentence. However, the judge, pitying his highly volatile childhood, let him off with a $2100AUD fine and a good behavior bond. From there, his relationship with the Australian authorities only deteriorated. It wasn’t long until his hacking was of international consequence.

When Assange was seeking asylum in 2012, he turned to Ecuador because he felt abandoned by the Australian government. Most likely, this can be attributed to the fact that the Australian government did not want to cross the United States, who saw Assange as a security threat. Assange’s lawyers described a letter from then Attorney-General of Australia, Jennifer Robinson, as a “declaration of abandonment.” The letter had stated that Australia would not seek to involve itself in any international exchanges about Assange’s future. She also wrote, “Should Mr. Assange be convicted of any offence in the United States and a sentence of imprisonment imposed, he may apply for an international prisoner transfer to Australia.” Interestingly, on February 21st, less than two months prior to his arrest, the Sydney Morning Herald reported that Assange had been issued a new Australian passport in September of 2018 under some unclear circumstances. Since the arrest, however, Australian leaders have ruled out intervention in a potential US extradition of Assange.

After seven years of Assange residing in the embassy, on April 11, 2019, President Moreno made a statement on Twitter: “Today, I announce that the discourteous and aggressive behavior of Mr. Julian Assange, the hostile and threatening declarations of its allied organization, against Ecuador, and especially, the transgression of international treaties have led the situation to a point where the asylum of Mr. Assange is unsustainable and no longer viable.” Cue international controversy.

Critics of the arrest are saying that President Moreno evicted Assange from the embassy for releasing photos of him eating lobster in a hotel bed – not ideal press while austerity measures are being introduced in Ecuador. The President told the press that those photos were taken on his birthday, and more importantly, Assange was removed because he had violated the terms of his asylum in the embassy. A lot of Assange’s behavior is reminiscent of a child acting out about being grounded; he was skateboarding inside, refusing to clean up after his cat, neglecting his personal hygiene, and even allegedly smeared his feces on the walls of the London embassy. Most flagrantly, he was using the embassy a “center for spying”- something that is expressly forbidden by international law to those granted asylum status.

It’s also important to note that President Moreno was not the one who originally granted asylum to Assange. Moreno inherited Assange’s residency from Ecuador’s previous president, Rafael Correa, who was dissatisfied with the United States and thus was a supporter of Julian Assange and his work with Wikileaks. Correa granted Assange asylum in 2012, under the pretext that there were “fears his human rights might be violated if he is extradited.”

All these years later, Correa remains a fan of Assange. After Assange was apprehended by the authorities, Correa tweeted, “The greatest traitor in Ecuadorian and Latin American history, Lenin Moreno, allowed the British police to enter our embassy in London to arrest Assange. Moreno is a corrupt man, but what he has done is a crime that humanity will never forget.” The division within Ecuadorian elites reflects as shift in international politics and perception of Assange and his work. Russian media shared that they condemned the arrest. Maria Zakharova, a spokeswoman for the Russian Foreign Ministry, said,“The hand of ‘democracy’ squeezes the throat of freedom,” implying that the political agenda of the West, and perhaps the military-industrial complex of the United States, is stifling dissent.

A conclusion on whether or not Assange should be revered or despised can’t even be reached within Ecuador, let alone the international community. Right now the debate is focused on which charges Assange will face and where he shall face them. Although the rape charge he faced in Sweden in 2012 has been dropped, an American indictment persists. Back in 2012, Assange’s decision to take asylum in the Ecuadorian embassy was heavily influenced by the fact that treason in the United States can warrant the death penalty. At the time, Assange believed that if he faced the sexual misconduct charges in Sweden, he would be extradited to the US, and potentially lose his life for releasing confidential documents publicly on Wikileaks. This fear has stuck with him to this day.

Interestingly, the United States has been fairly quiet on this issue. The indictment charging Assange with conspiracy to commit computer intrusion in 2010 was finally unsealed on the day of his arrest. President Trump, meanwhile, has resorted to claiming, “I know nothing about WikiLeaks. It’s not my thing. … I don’t really have any opinion,” which is an unusual stance for a man who typically resorts to hyperbole. His assumed ignorance of the issue is incongruent with the multiple investigations being led by U.S. authorities, including three congressional probes, and a federal criminal inquiry into Wikileaks and Assange, and their role in the 2016 election, including the release of Hillary Clinton’s hacked emails.

Upon seeing the video of a very disheveled and aged-looking Assange being removed from the embassy, Pamela Anderson, “Baywatch” star and friend of Assange, tweeted, “…He looks very bad. How could you Equador [sic]? (Because he exposed you). How could you UK?” in reference to Britain agreeing that Assange should be extradited the the US – the only two places that seem to publicly agree on that.

In an op-ed published in the Guardian, Jess Phillips provides a thoughtful critique of how the UK, whose leaders are divided on the issue, has responded to the arrest: “In the sparring match about the case between Diane Abbott and Sajid Javid, in parliament on Thursday, neither of them mentioned the fact that Assange has, for seven years, evaded accusations of sexual violence in Sweden.” She discusses how the agendas of the UK and the US neglected the interests of Sweden and consequently shows a lock of respect for women’s rights, as extradition to the US would mean that the charges in Sweden would go unaddressed. She writes that once again, “when big boys are playing toy soldiers no one cares how many lady figures are brushed off the table.”

It may be hard to grasp how one man has inspired so much debate – but really no one should be surprised. Assange, advocate of information transparency and market libertarianism, founder of Wikileaks, or non-state hostile intelligence service has managed to make waves in the international community, even while holed up in a single building for the last seven years. Whether you revere him or despise him, Assange his inspired a multitude of discourses tied to free-speech, human rights, as well as systemic marginalization of female-centric narratives. Based on the breadth of the issues at hand, it’s clear that this is far from the last of what we’ll hear about Julian Assange.