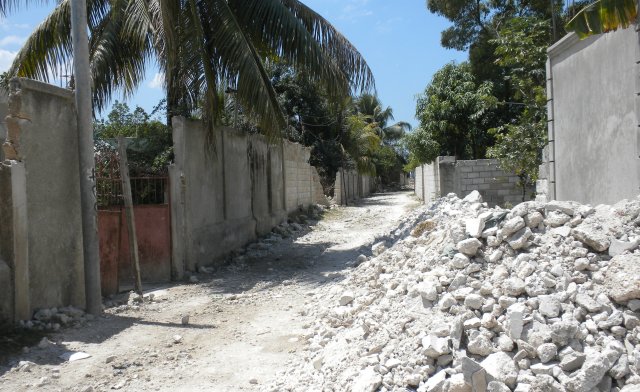 By Adriane Wynn and Lindsay Gilchrist

On March 20, 2011, we boarded a plane and headed for Haiti. We had just finished our second quarter at the UCLA Luskin School of Public Affairs and hoped to do something meaningful during our spring break. We decided to work with a U.S.-based nonprofit called All Hands Volunteers, which focuses on disaster relief around the world.

From the plane, Haiti resembled the images of Caribbean countries commonly found in travel magazines. The green, rolling mountains were surrounded by the crystal blue Caribbean Sea. As the plane descended, however, the sprawling city of Port-au-Prince came into view and the large tent encampments provided a stark reminder of the January 2010 earthquake.

From Port-au-Prince we were shuttled to the All Hands base camp in Leogane. The 20-mile drive took almost two hours. Many of the main roads were still damaged from the earthquake. The deep cracks combined with heavy traffic required some creative driving methods. To avoid looking forward, we glued our eyes to the windows, taking in the sites. Passing the local vendors and the banana tree-lined streets, we admired the colorfully decorated trucks known as “tap taps” that serve as taxis. The large number of collapsed buildings and the piles of concrete lining the streets shocked us. It seemed odd that, in many cases, one building would be fully intact and the building next door would be completely destroyed. During our six-day stay in Haiti, we would become intimately connected to a few of the country’s collapsed buildings.

We were happy to arrive in Leogane, a city of approximately 134,000 people. Located near the epicenter of the 2010 earthquake, the United Nations reports that 80-90 percent of Leogane’s buildings were heavily damaged. Found on the northwest corner of the city, the base camp is an open-air, concrete structure filled with bunk beds and space on the roof for tents. Volunteers sign up daily for projects that include helping with transitional school building, partially damaged home demolitions, Bobcat operation, Biosand Filter construction and installation, and residential rubble removal.

As short-term volunteers, we chose to help remove rubble from residential areas, an activity referred to as “rubbling.” Our first rubbling experience took place on Tuesday afternoon at a site called Stanley, named after the property owner. We loaded our wheelbarrow, sledgehammers, shovels, wire-cutters and a water cooler into a tap tap and climbed in. The drive through town gave us a glimpse of both the earthquake’s devastation and the bustling of lives struggling to return to normal. We drove past markets with a variety of vendors, weaved through traffic filled with cars, tap taps, and motorbikes, and passed pedestrians and uniformed school children.

We arrived at Stanley and unloaded our equipment in the full heat of the afternoon. Where a home once stood now existed piles of broken cement and gnarled reinforcement bar (rebar). Our goals were to break apart the rubble with sledgehammers, remove the rebar, shovel the pieces into a wheelbarrow, and carry them out to a pile on the street. We were given a quick sledgehammer tutorial and then set to work on the thick slabs. While we removed debris we began to find the remnants of a home. There was a rocking chair, a dining room table, and a picture frame. In the bathroom we found soap bottles and a razor. A few children stood on the periphery hoping to help out where they could. We struggled to hold back tears as a relative of the owner began sifting through the piles to see if anything was salvageable. Throughout the week, at three different sites, we continued this process of pounding and carrying away cement.

Since the earthquake, All Hands volunteers have removed 14,000 cubic meters of rubble from 194 sites for 230 families. Despite the progress in Leogane, rubble removal is desperately needed throughout many areas of the country. According to the UN Development Program, as of January 2011 only one fifth of the total debris has been cleared. The existence of rubble sites makes it difficult for families and cities to rebuild and move forward.

On the car ride back to Port-au-Prince we tried to take pictures of the scenes we missed on our arrival: the crumbled Presidential Palace, the election signs, and the rows of sugar cane that seemed to stretch for miles.

Now that we are back in Los Angeles and close to completing our first year of graduate school, we often think about our short time in Haiti. In particular, we think about the local volunteers that worked alongside us, the amazing All Hands staff, the new friendships we formed, the long, sweaty days in the sun; and about the rubble at Stanley.

Adriane Wynn and Lindsay Gilchrist are both Master of Public Policy candidates at the UCLA Luskin School of Public Affairs.