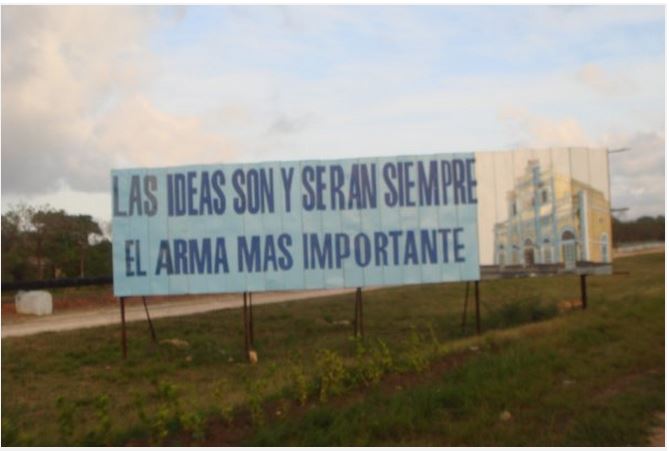 Cuban propaganda declaring “Ideas are and forever will be the most important weapon.”

On 14 December, 2014, President Obama announced he will re-establish diplomatic relations with Cuba after almost 54 years. A month later in the State of the Union, he called on Congress to end the embargo in 2015.

Since its beginnings in 1960, the embargo has done nothing to promote its stated goal of fostering democracy and human rights on the island. On the contrary, Cuba remains a one-party communist state that has been led by either Fidel or Raul Castro since 1959.  In reality, the brothers use the embargo to successfully create a martyr identity; propping up their regime by giving them a boogeyman on whom they can blame the country’s economic woes. Furthermore, it serves as a derisive obstacle to US cooperation with Latin America. Economically, it costs US exporters at least $1.2 billion per year.  Even stalwart allies, with the exception of Israel, leave the US isolated on this issue by renouncing the embargo.  Since 1999, more Americans have favored ending the embargo than oppose ending it. So what’s the fuss? Why has it taken so long to abandon an anachronistic cold-war remnant that is not just ineffective, but deleterious to American interests?

Over the last 40 years, the “Cuba Lobby,” interest groups that support the embargo and other hardline policies towards Cuba under Castro, has wielded an unrivaled level of influence in Washington; indeed, analysts like American University’s William M. Leogrande have deemed it more powerful than even the NRA. The Cuban American National Foundation (CANF) and the U.S.-Cuba Democracy PAC have a long history of wooing congressional candidates with campaign contributions and punishing those who would renounce the embargo. Similarly, this power reaches even to the State Department. Notably, congressmen under the influence of this cartel are known to manipulate the agency’s funding for specific programs and deny appointments to career Foreign Service Officers who are not sufficiently hard on the Castro government.  Furthermore, in possibly the moment when their influence was most strongly felt, many election analysts believe that the traceable chain from Vice President Al Gore to the Clinton Administration’s actions during the Elian Gonzalez saga provoked the wrath of the CANF and the Cuban American exile vote during the 2000 election. Consequently, the lobby’s powerful presence in Florida helped swing the state, and correspondingly the presidency, to George W. Bush.

However, this is all changing. The first group of Cuban Americans who came to the US as political refugees after the Cuban Revolution are now well into their 80’s. It is this generation and their children, themselves aging and approaching retirement, who fervently loathe the Castros.  These older Cuban Americans make up the leadership who push the Cuba Lobby to strongly support the embargo and other policies that isolate Cuba. On the other hand, the more recent Cuban immigrants came to the US for economic reasons.  They do not possess the same acrimonious sentiments towards the Castros. They desire improved relations between the US and Cuba so they can visit and send remittances to their families without hindrance. As this younger generation replaces the older one, a window is now opening where a majority of Cuban Americans wish to see the embargo end. Currently, 52% of Cuban Americans in Miami-Dade County, the largest center of Cuban Americans, oppose continuing the embargo. The changing mood in the Cuban American community, and the fact that the President sees it as politically safe to normalize relations with Cuba, are evidence that the Cuba Lobby’s power is beginning to fade.

Even with the change in general attitude that is spurred by shifting demographics, it is unlikely that we will see any changes toward the embargo in the near future. As a matter of fact, both Houses of Congress are in the hands of Republicans. If Congressional Republicans fall in line as expected with current leadership, Speaker John Boehner and Senator Mitch McConnell, the necessary congressional support needed to repeal the embargo will be hard to come by.  Under the current hyper-partisan climate in Congress, supporting policies that are promoted by the President are often seen as traitorous to the Republican cause.  With that stated, there are some GOP supporters in Congress such as Senators Jeff Flake and Rand Paul who desire a change in policy. However, for the time being, the Cuba Lobby still retains its hold on the legislative branch. Perhaps future Congresses can end the embargo by bringing either a change in party control, or, if enough Republicans find political incentives to oppose the Cuba Lobby.

The embargo is very likely to become a hot foreign policy issue in the next Presidential election.  The Democratic frontrunners support continuing President Obama’s initial steps. However, with the notable exception of Rand Paul, nearly all the Republican hopefuls oppose the president’s efforts to normalize relations with the island.

It is ironic that while the Cuba Lobby has been able to exploit Florida’s disproportionate political importance for its own cause, those wishing to end the embargo are looking to do it through another US electoral power oddity: Iowa, the first state to begin the process to pick presidential nominations for both parties. The United States Agricultural Coalition for Cuba (USACC), an organization made up of many powerful agricultural interest groups, sees Cuba as a potential market for farm exports. They can count among their supporters current US Secretary of Agriculture and former Iowa Governor Tom Vilsack. USACC’s goal is to convince voters in Iowa’s caucuses of the potential benefits that ending the embargo would have on the local agricultural industry. It appears their argument is already being heard in Iowa as the State Senate recently approved a resolution supporting enhanced trade between the US and Cuba.

Perhaps the Iowa caucuses can convince those seeking the Republican nomination, and in turn provide evidence to Congressional lawmakers, that opposing the Cuba Lobby is a politically tenable position.  The beginning of presidential nomination process will be a great barometer to how close the US is to ending the embargo.