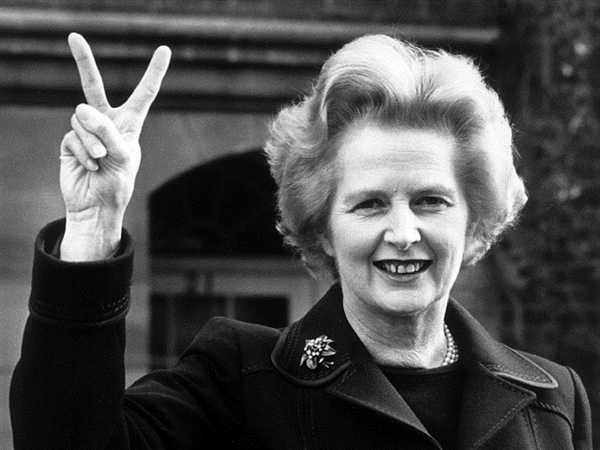 Margaret Thatcher, former Prime Minister of Great Britain died April 8, 2013 at the age of 87.  She was a controversial leader who had a major impact on not only her own country but on the course of international events as well.

Thatcher was a neoliberal, along with Reagan and German Chancellor Helmut Kohl.  These “free marketeers” privatized businesses, cut taxes, broke unions and demonstrated military might.  Because of her no-nonsense leadership style, a Soviet journalist dubbed her the “Iron Lady.”

What may be her most lasting legacy was her abiding campaign against communism.  Her time in office perfectly coincided with the fall of the Soviet sphere of authority over the world.  Her relationship with the U.S. was famous, and, as President Barack Obama stated, “She helped restore the confidence and pride that has always been the hallmark of Britain at its best.”

Even her long time adversary, former Soviet leader Mikhail Gorbachev credited her with helping to end the Cold War, noting that “relations were complicated sometimes, not always fair, but serious and responsible on both parts…We managed to achieve mutual understanding after all.”  He also told Interfax news agency, “Thatcher was a politician whose words carried great weight,” calling her death “sad news”.

Many questioned whether she was justified in sending her navy halfway around the world to reclaim the Falkland Islands from the Argentinians who had invaded.  For that bold move, she is revered as a hero to the English and Falklanders alike.

This is not the case in Argentina.  They remember her as a war criminal who ordered an Argentinian ship to be sunk during that conflict.  That day, 323 lives were lost.  In all, over 600 Argentineans would pass during this conflict.

The silver lining to Argentina’s humiliating loss of the Falklands was that the military junta dictatorship in power was discredited and soon fell from power.  This brought about a split from decades of state terrorism against leftists and socialists and signaled the return to democratic rule in Argentina.

United States President Ronald Reagan, Thatcher’s strongest ally, had backed a peace plan that called for Britain to step back from controlling the Falklands.  Thatcher hated this and let him know it.  She could not stand the way Washington coddled the authoritarian regime in Buenos Aires.  She was unwavering.  Even during one of her less popular times she famously said,  “the lady does not turn.”

She was Britain’s first female Prime Minister who became known for sweeping away social supports that have yet to return.  She was a brash trailblazer that shattered glass ceilings for generations of UK women to come.

Many of the mining labor organizers in northern England were reported to be “raising a drink” to toast her passing – remembrance of Thatcher shutting down unprofitable mines and crushing the unions during the Miners Strike of 1984-85.

Thatcher was also famously known for being the grocer’s daughter who became a conservative icon.  Few can argue that she did not have a huge impact on Britain and on the world.  In keeping with her simple ways, her funeral on April 17 will not be a full-state affair, and the service will be followed by a private cremation.

Even this procession will not be without controversy, though.  In protest, opponents have planned to turn their backs en masse as procession passes by.  Ironically, one could imagine the feisty Thatcher would have approved of this kind of unapologetic demonstration of  free speech.