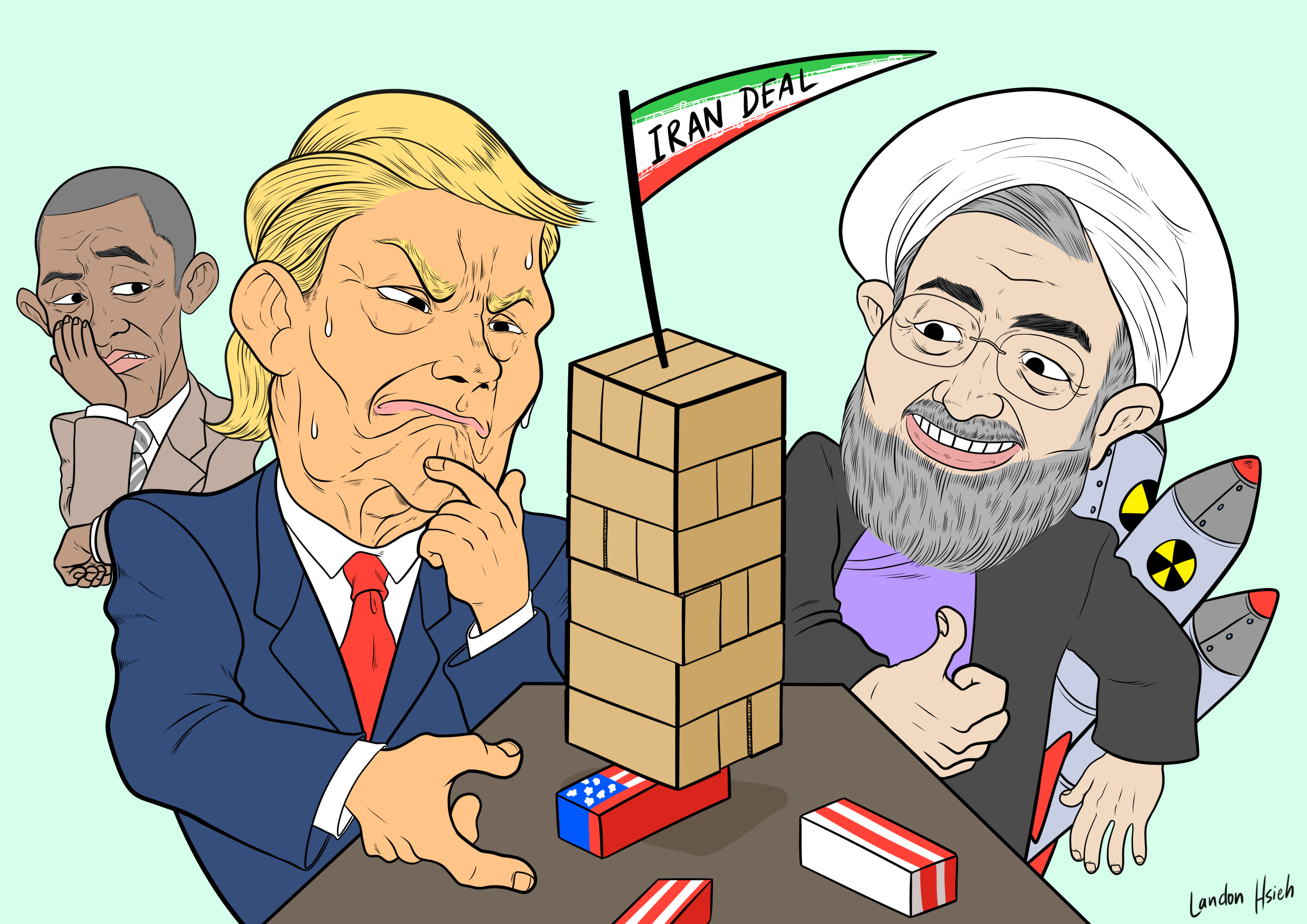 After many months of debate within the executive branch, on May 8th, 2018 President Donald Trump formally withdrew the United States from the Joint Comprehensive Plan of Action, or JCPOA. The agreement, more commonly referred to as the Iran Nuclear Deal was reached in 2015 and later signed onto by Iran, the U.S, China, Russia, France, the U.K, and Germany. The intent was to limit the advancement of Iranian nuclear capabilities. The deal mandated that Iran reduce its uranium-enrichment activities for the next fifteen years and agree to increased inspections of its nuclear facilities by the International Atomic Energy Agency (IAEA) to ensure compliance with the agreement. Assuming Iranian cooperation, the other parties agreed in exchange to terminate the United Nations Security Council’s economic sanctions against Iran for its past nuclear activities, freeing up billions of dollars in frozen Iranian assets, and to provide Iran with economic relief. While much has been made of the deal’s shortcomings, the overwhelming consensus is that the agreement is the best option available for avoiding either a nuclear arms race in the Middle East or another American-led war in the region.

Yet despite the consensus, Trump has long railed against the deal as a poor choice on the part of his predecessor, President Barack Obama, calling the agreement “an embarrassment” and “the worst [deal] the U.S ever entered into”. In both his speech withdrawing the U.S from the agreement and his campaign rallies before that, Trump justified and encouraged America’s exit from the agreement on the basis of three points. First, the President claims that the deal does little to limit Iran’s access to a nuclear weapon. Second, he maintains that it encourages Iranian meddling in the Middle East, such as support for the Assad regime in Syria and Houthi rebels in Yemen, threatening the region’s stability as well as U.S and Israeli national security. Third and finally, President Trump claims that withdrawing would demonstrate a renewed sense of American strength and leadership to the world, as it shows that the U.S will not be cowed into compromise. Unfortunately for Trump, the U.S, and the rest of the world, he is wrong on all three fronts. In fact, on each point, Trump’s decision to leave the JCPOA will have the opposite effect than the one he claims.

At the beginning of his speech announcing America’s intent to withdraw, Trump justified his decision by saying that if the deal were not to be altered or adjusted, then “in just a short period of time, the world’s leading state sponsor of terror will be on the cusp of acquiring the world’s most dangerous weapon.” Contrary to his claim, this assessment is false. There is an overwhelming consensus amongst government officials and nuclear experts that the current deal is, and remains, the best available option to limit Iran’s nuclear capabilities. According to a poll of international relations experts conducted by the Teaching, Research, and International Policy (TRIP) organization, an astonishing 94% of international relations scholars agree that remaining in the deal is the U.S’s best chance of limiting Iran’s access to a nuclear weapon. Jeffrey Lewis, for instance, the director of the East Asia Nonproliferation Program at the Middlebury Institute of International Studies, has said that pulling out of the deal will actually allow Iran to produce nuclear weapons faster, a sentiment often echoed by President Obama. Kingston Reif, the director of Disarmament and Threat Reduction Policy for the Arms Control Association agrees, saying that the move will actually “[increase] the risk of an unconstrained Iranian nuclear program.” Additionally, General Joseph Dunford Jr., Chairman of the Joints Chiefs of Staff, has maintained that the deal “has delayed the development of a nuclear capability by Iran.” Moreover, despite a barrage of criticism leveled at the deal by Israeli Prime Minister Benjamin Netanyahu who recently accused Iran of cheating on its commitments, Israeli Defense Forces Chief-of-Staff Gadi Eisenkot has noted that Iran has yet to violate the deal and that the agreement, so far, “is working…putting off realization of the Iranian nuclear vision by 10 to 15 years.”

Even many officials within Trump’s inner circle have argued on behalf of the constraints the deal places on Iran’s nuclear activities. Dan Coats, Trump’s Director of National Intelligence, said in May 2017 that the JCPOA has “enhanced the transparency of Iran’s nuclear activities” and “extended the amount of time Iran would need to produce…a nuclear weapon.” Defense Secretary James Mattis has also advocated for remaining in the deal, calling the inspections the deal requires “pretty robust” and the text written “almost with an assumption that Iran would try to cheat.” Finally, former Secretary of State Rex Tillerson also disagreed with his former boss on the deal, and lobbied hard for the U.S not to renege on its commitment. Thus, despite Trump’s constant stream of claims that the deal assists Tehran in its quest for a bomb, scholars, military officials, and even members of Trump’s administration believe that leaving the deal will actually result in a stronger Iranian nuclear capability.

The second argument Trump made to justify America’s exit from the Iran Deal was that remaining in the agreement would cause a “nuclear-arms race in the Middle East,” and would allow Iran to continue its “destabilizing” and “menacing activities” in the region and across the world. These assertions too are false.  Mark Fitzpatrick, the former U.S Deputy Assistant Secretary of State for nonproliferation has said that allowing Iran’s nuclear program to proceed without the limits and transparency the deal creates actually increases the potential of an arms race in the Middle East. British Foreign Secretary Boris Johnson concurred. Appearing on Fox News just days before Trump’s announcement, the former London mayor warned that pulling out of the deal would cause “an arms race in the Middle East…the Saudis wanting [a nuclear weapon], the Egyptians wanting one, the Emiratis [wanting one].” Thus, contrary to Trump’s claims, a Middle Eastern arms race is now much likelier following America’s exit from the agreement.

Moreover, the U.S’s best bet to deal with Tehran’s “destabilizing” and “menacing” activities in the Middle East is to empower moderate factions within Iran, including the Iranian President Hassan Rouhani who struck the deal back in 2015. This will have the additional effect of bolstering American and Israeli national security. Elected on a promise to spur the economy, Rouhani and his Moderation and Development Party’s gamble was that an end to the U.N sanctions and the subsequent growth that ensued would be enough to convince ordinary Iranians of the deal’s merits and his decision to engage with the West. Therefore, the U.S’s exit and its choice to reinstate sanctions discredits Rouhani and the moderates while empowering the religious and political hard-liners who have been actively attacking the agreement. In the words of one Iranian diplomat, having lost the support of the people Rouhani is now operating essentially as a “lame-duck” president. These hardline factions will destabilize the Middle East– through ramped up Iranian intervention in Syria, Lebanon, and Yemen– and threaten American and Israeli national security more than Rouhani will. The effects of this can already be seen with the recent missile exchanges between Israeli forces and Iranian militias along the Syrian-Israeli border; the first time Iranian forces have fired directly on Israeli soldiers. As the Washington Post reported on May 10th, America’s exit from the agreement gives Tehran “less to lose by retaliating” against Israel and has “served to embolden hard-liners…who want to show strength.” Iranian missile launches against Israel are both destabilizing, menacing, and a threat to the national security of the U.S and its Middle Eastern allies. Therefore, despite Trump’s supposed desire to bring “peace and stability” to the Middle East, pulling out of the deal has already, brought about the exact opposite and will likely continue to do so.

The third and final justification Trump gave to defend his decision to leave the JCPOA was demonstrating a renewed sense of American strength and leadership to both Iran and the rest of the world. In his speech Trump said, “America will not be held hostage to nuclear blackmail,” that “we will not allow American cities to be threatened with destruction,” and that the U.S “no longer make[s] empty threats.” In Trump’s eyes, refusing to compromise shows strength and acting unilaterally, and independently from our allies, constitutes leadership. Unfortunately for the United States and the rest of the world, the President’s understanding of what makes America strong is flawed. Since the end of World War II every President- Republican and Democrat- has supported the international-liberal order in which American-led multilateral action has been the response to international crises. This belief that the U.S, given its overwhelming economic and military might, has a unique responsibility to lead on global issues has not only guided American foreign policy for the last 70 years but has been of tremendous benefit to the world. Trump’s choice to pull the United States out of the Iran deal, and his previous decisions to do the same with both the Paris climate agreement and Trans-Pacific Partnership (TPP) free-trade deal, demonstrate an end to this consensus. While the President may believe that pulling out of these agreements show strength, breaking promises, cheating commitments, and acting without regard for any country but our own are hardly traits indicative of a strong, consistent, reliable nation, nor ones that other nations are likely to look for in a leader.

Furthermore, while Trump may believe that leadership is demonstrated by independent action, such an understanding is only valid when there is actual action being taken. Despite references to a better deal, there is no strategy within either the administration or the State Department on how the U.S plans to improve on it. Taking an axe to international agreements with no concrete movement towards correcting the flaws that inevitably arise from negotiation does not constitute leadership. On the contrary, it simply shows laziness.

If Trump was truly committed to limiting Iranian nuclear capability, a peaceful and stabilized Middle East, and American strength and leadership, he would proudly keep the United States in the Iran deal. It is to the detriment of both the U.S and the world that his decision to pull out of the agreement will likely contribute to the loss of all three.