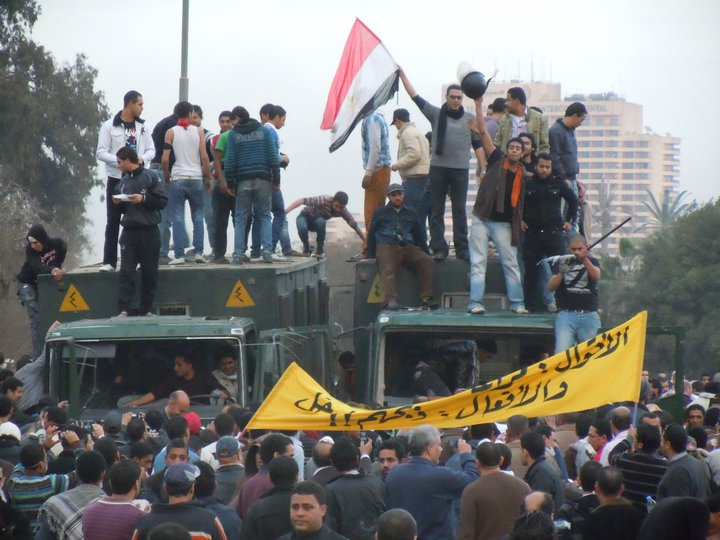 Since my arrival in Egypt last August, I’ve sensed the resentment felt toward Mubarak’s rule.  Yet neither any Egyptian, nor I could have predicted the series of events that would ignite a revolution.

I originally chose to come to Egypt to learn Arabic.  Egypt is ideal for this goal as it is the most populous Arab country as well as the leading exporter of regional culture and cinema.  Moreover, the Egyptian-Arabic dialect is understood throughout the Arab world. I’d also be lying if I didn’t say the Pyramids played a factor.

I remember reading about the revolt in Tunisia and seeing my Egyptian friends praise the Tunisian people on Facebook.  Shortly after the successful overthrow of the regime in Tunisia, I traveled to Morocco on vacation. Having limited internet access as I traveled, I was relatively clueless as to the importance of the protests on January 25th, which later became the official start of the revolution. Friends and family suddenly flooded my Facebook account with messages like “Please say you’re safe” and “Are you coming home?” Meanwhile, many of my Egyptian friends were calling for continued protests. Not having much time to read up on the protests, I was sure peoples’ worries were exaggerated and continued my plan to return home to Cairo the following day.

On the night of January 27th, I arrived at the Cairo airport. The taxi drivers, who normally asked 50 E£, were now asking 200 E£. We thought that seemed a little ridiculous, so my friends and I opted to take the bus and metro. Although things seemed normal as I returned home to my apartment, I soon discovered neither my cell phone nor internet worked. My roommate Sami informed me that the government had just cut both off in an effort to squash the protests. At that moment, I began to realize the gravity of the situation.

On the morning of the 28th, even if I hadn’t been watching CNN the night before, I would have known something was wrong. The normally hectic streets of my neighborhood, Dokki, were completely empty and would not return to normal for a long time thereafter. Shortly after awakening, I heard shouts from outside echoing down the street. I quickly ran to the balcony and saw that riot police had blocked off all entrances to Tahrir Street as well as the Al Galaa Bridge leading to Tahrir Square.

Not sure of how to react to the protests, I stayed in my apartment and decided to take advantage of the view. I watched as riot police retreated and regrouped by Al Galaa Bridge.

As Sami and I watched CNN, we looked out from our balcony to see the progress of the protests. At one point, we heard a roar of cheering outside and ran again to the balcony to see a wave of people running towards Al Galaa Bridge.

It was at the square in front of this bridge leading to Tahrir Square where protesters and riot police clashed. The stalemate lasted for hours as crowds pushed everyone closer to the no-man’s land that was the square. Meanwhile, the riot police fired tear gas to keep a safe distance between the crowd and themselves.

Eventually, the protesters pushed the riot police further back across Al Galaa Bridge and successfully gained control of the square. At that point, I decided to leave my apartment and take a look at what was happening on the ground. I found a mixture of anger and happiness, but mostly happiness, as people celebrated the advances.

Despite the burning sensation in my throat and eyes, I felt perfectly comfortable walking around Dokki, where just an hour earlier police had been firing tear gas.  Curious, I decided to brave the freshest tear gas on the bridge just so I could see any new developments that had not been visible from my apartment. I found many young people climbing all over two empty police vehicles, waving flags.

As I headed further across Al Galaa Bridge, a man came up to me and offered me an onion. The man explained, “Put this in your nose and it will protect you from the tear gas. Try it, it works!” I thanked him and as I held it up to my nose to test it out. Suddenly, the crowd ahead of me began to stampede toward me. Juggling my camera and a piece of onion, I dropped the onion and took off running, struggling to record the stampede heading toward me. By the time I finally managed to film the events, I had already made it back to the square in Dokki:

Despite my warm welcome by protesters, I decided I didn’t want to be caught between protesters and riot police. Once you cross Al Galaa Bridge, you are trapped either on the bridge or between large walls for almost a mile until you cross Qasr Al Nile Bridge into Tahrir Square. With the crowds of people, it can be dangerous, especially when people begin to stampede.

We went home and continued to watch the situation unfold on CNN. At nightfall, I heard a loud explosion outside and ran to my balcony. I could see two police cars engulfed in flames. CNN had announced that things had quieted down in Tahrir Square, so I decided to see for myself. I could spot the ruling party’s headquarters engulfed in flames from a distance.

Cars, mostly police vehicles, that were in the way were also set on fire.

Despite the constant sound of gunshots nearby and seeing Molotov cocktails being thrown on the other side of the square, it felt oddly calm. Perhaps it was the scarce amount of people left compared to earlier or the surreal feeling of seemingly being in a war zone at night. It could have even been the entrancing effect of the dancing flames all around me.

The only thing that worried me was peoples’ words. Everyone was much more distressed than earlier as they began to fear what the protests would portend. I received mixed messages from Egyptians as to whether they wanted me to document the events. “No! No!” an older man would say, fearing future reprisal as I held up my camera. “No picture!” In another instance, a younger man walked by me saying, “Take picture! Take picture of this!”

“Where are you from?” someone asked as they came up to me. I’ve always been told never to say I’m from the United States. Even though I didn’t suspect it was a problem, I blurted out “France.” (This was the only time I felt uncomfortable revealing my nationality.  Later I did at every other occasion). I started rolling the video but he did not want to be seen on camera.

Although you cannot see very well, you can briefly hear the cries of a young man who was shot in the eye. Although he is conscious in the video, his eye is swollen and blood is pouring out of his face. He squeals as people carry him away on a motorcycle. Unfortunately (or fortunately) due to the lighting, you cannot see anything.

A man approached me urging me to leave Tahrir Square because it was unsafe. At that moment, a stampede of protesters spooked me and I started recording.

Before the military moved in, protesters began to set up barricades to keep tanks and cars from moving in and out. They grabbed sticks and poles, and began to bang the metal banisters in sync almost as if this was a song of war. I decided to seize this opportunity to exit and head back to my apartment. On my way across Qasr El-Nil Bridge, a crowd was gathered overlooking the underpass, cheering the Egyptian youth who had overtaken two police convoys and were cruising around and picking up other teenagers for the thrill of it.

Another man reprimanded me for taking pictures of them, so I took off, heading back toward my apartment in Dokki. On the way home, I crossed multiple people carting home office chairs as well as carrying boxes, all of which I assumed were from government office buildings. Others must have assumed the same as no one paid any attention to these looters.  I had trouble sleeping that night with gunshots echoing throughout the city.

The next day was probably the most unsettling of the whole revolution. Outside, the streets were empty, which was surreal for normally bustling Cairo. I awoke early to my cell phone ringing as the mobile networks had just come back online. As my friends and I began to check up on each other, I alternated between long phone conversations and watching the news. With Mubarak’s government still clamping down on the internet, these were my only links to the outside world.

Exhausted, I had fell asleep while watching CNN and awoke again after sunset. The media reported that all police had disbanded and citizens had formed neighborhood watch groups to protect their neighborhoods from looters. The most disturbing news of the day, however, was that inmates from a prison southwest of Cairo were running wild after an alleged attack.  From my balcony I could see my neighbors armed with anything from metal poles to bats. The police they had so ardently fought against now were nowhere to be found… or were they?

Many Egyptians believe, and in many cases it was proven true, that the police from that point on became troublemakers. Dressed in plain clothes, they could stir up violence and instability in order to frighten people into rejecting the protests in favor of a restored safety under Mubarak. The neighborhood watch had set up checkpoints throughout the neighborhood to stop looters and criminals from traveling freely through the neighborhood after curfew. I watched the neighborhood gradually become more organized throughout the night. At first they just stood outside their homes and tried to stop the occasional vehicle by standing in the street. By the end of the night, they had made physical barriers with concrete blocks and large metal sheets or poles, which enabled them to routinely stop cars and motorcycles to ask for ID and search for stolen goods. My neighbors revealed to me they were mainly checking the profession listed on the ID, to catch any plain-clothes police officers looking to cause trouble.