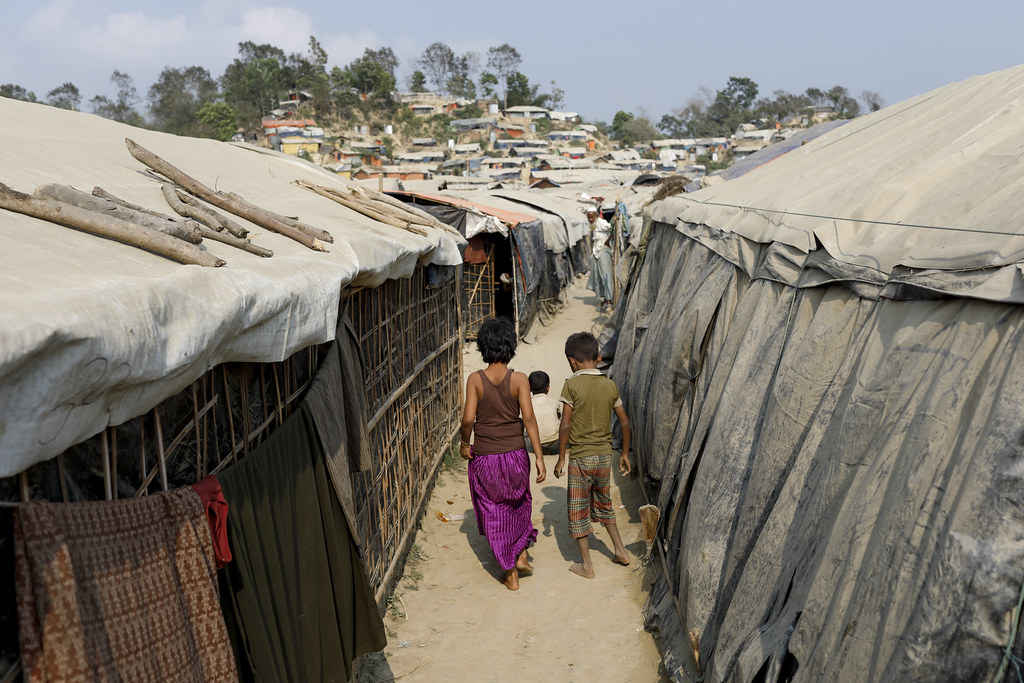 Known previously as Burma, Myanmar was subject to British colonial rule from around 1820 to 1948, like its surrounding neighbors of Bangladesh and India. Surprisingly, for most of Burma’s history, the Rohingya Muslim minority actually lived peacefully with their Buddhist neighbors in the Rakhine state, situated right next to Bangladesh’s Cox Bazar. Many legal documents claim Muslim minorities acted as “advisors to Buddhist royals,” even having a deliberate say and place in Burma’s politics since the 1500s. In fact, it was only towards World War II where religious violence began to erupt in the modern form that one can see today. The British began recruiting the Muslim minority as their soldiers, while the Japanese army aligned themselves with the Burmese Buddhists. Both of these governments’ armies used religious divisions as a political and military means; it was from here that we can start to see a Burmese resentment towards the Muslims as being traitors to their nation.

After Burma gained independence, the government published a list of the 135 official ethnic groups native to the country. The Rohingya are nowhere to be found on that list. There is even a law that limits the civil rights of the Rohingya. The 1982 Citizenship Law has complex procedures in which Rohingya men and women are only allowed to raise two children, and they are not allowed to marry unless given permission. This is usually done by bribing authorities or providing evidence that the couple does not follow Islam, such as giving pictures of the bride without a hijab to prove secularity. Rules governing property ownership and taxation also are extremely cumbersome and arbitrary. The Rohingya are not legally considered citizens; they are forced to carry around “white cards” which allows them legal standing as temporary residents in Myanmar.

The amount of persecution has skyrocketed within the last decade. Dildar Begum and her 10-year old daughter were repeatedly raped by Myanmar troops on August 30, 2017. She watched soldiers hack her 5-year old son “to death in front of her,” and was forced to witness the slitting of her husband’s throat. As a Rohingya Muslim, Dildar Begum’s idea of statehood and the “home” is nonexistent, as she is being kicked out of Myanmar by state soldiers, but is also unwelcomed into Bangladesh. For people like Dildar Begum, being Muslim and Burmese becomes a contradiction of sorts. She never fits in with Bengalis because of her language, but cannot be considered Burmese because of her faith. Dildar Begum’s case is not an isolated instance of violence. Mamtaj, also thirty years old, faced a similar situation where one of her sons was “thrown into a fire,” while the other was shot from behind in the head.  In both of these cases, their husbands and sons were killed first so the Myanmar troops could proceed to rape the women without resistance. Myanmar’s State Counsellor Aung San Suu Kyi has received tremendous amounts of criticism in terms of the delayed response to the persecution of Myanmar’s Rohingya minority.

Kutupalong is the world’s largest refugee settlement, housing the Rohingya people and spanning over the Cox Bazar area of Bangladesh. Estimates predict that there are about one million refugees total; women and children make up most of the population of the camp, according to UN data.  Recent weather analysis and scientific reports have rendered Kutupalong as one of the most susceptible areas to climate change, as the geographical positioning next to the Bay of Bengal makes the camp prone to intense cyclones and “vigorous monsoons,”  further exacerbating inequality by destroying homes and requiring constant efforts to rebuild the camp. Due to massive overcrowding, water resources have become scarce as well; environmental scientists tested the groundwater at random locations around the camp and found that 70 percent of their samples contained E. coli. In addition to geographical positioning, Ukhia, in Cox Bazar, is home to many forests and contributes vastly to the world’s biodiversity. Due to overcrowding within the camp, people have shifted towards deforestation and land degradation to accommodate the influx of refugees. This depletion of resources has actually hampered the survival of refugees. The Bangladesh Centre for Advanced Studies (BCAS) representative Atiq Rahman has in fact argued that cutting down trees “destabilizes the terrain” as Bangladesh’s hills are “soft soil hills,” getting much of their stability from the roots of trees. The risk of hill collapse becomes imminent. As the camp continues to expand and accommodate new refugees on these faulty hills, more tragedies and environmental disasters await. Expanding the refugee camp is simply not a sustainable solution.

To this day, most of Burmese nationalists refer to the Rohingya minority as “Bengali Muslims,” and fail to use the Burmese word Rohingya as it would give credence to the fact that this minority group originally stemmed from the Arakan Kingdom in Burma. Even State Chancellor and Nobel Peace Prize winner Aung San Suu Kyi has denied to call them Burmese citizens, allowing the massacre to continue within her own borders. To call them Rohingya would be to humanize them as Burmese. To Buddhist nationalists in the Ma Ba Tha movement, they are anything but human.

The Ma Ba Tha movement is a nationalistic association of Buddhist monks and worshippers who preach against the rise of Islam. They fear what many of them term as the “Islamification of Asia,” a phenomenon which leader Wirathu has claimed will “destroy Burmese culture and the future of Buddhism.” In one of Wirathu’s speeches, he argued that the Muslim is one who is prone to be “inherently violent […] want[ing] to eat their own kind.”

Wirathu, known as the “Burmese bin Laden,” was on the cover of the 2013 Time Magazine under the title “The Face of Buddhist Terror.” In this piece, the magazine points out that the slogans and ideology that Wirathu is preaching is not a new phenomenon. In fact, Buddhist extremism has been prominent not only in Myanmar, but also Sri Lanka during their civil war, where many Buddhists rallied around claims of taking back Buddhism from Tamil Hindus. The same is true in Thailand. The narrative has always been as such: Buddhism is on the decline because of a foreign enemy, we must fight back to protect our way of life.  These monks use the idea of sangha (or the importance of a monastic community) to justify their violent behaviors. For them, Buddha’s message is on the decline, and if there are no more monks, a “Buddhist End Times will begin.” They term this the final kalpa, where an apocalypse will occur with a massive rainfall to end all life on Earth, just to begin a new one. In order to forestall the “End Times” from happening, extremist Buddhists resort to violence to preserve Buddhist monasticism. In Meiktila, 40 Muslims were killed by a group of Buddhists. In one Rohingya village, 70 Muslims were slaughtered. It’s vicious killing campaigns like these that cause the Rohingya to flee into neighboring Bangladesh for refuge. The misguided effort to preserve Myanmar’s Buddhism has been a central tenet guiding the persecution of the Rohingya Muslims. Despite the doom-and-gloom rhetoric, it is important to highlight that positive steps are definitely being made towards the rights of the Rohingya people, and can potentially be guaranteed with external pressure from groups like ASEAN or countries such as China or India. Recently in 2017, Myanmar and Bangladesh hashed out a deal regarding the issue of repatriation, despite an eventual postponing of the deal later on. Even the international community, such as the US and EU, have attempted to impose sanctions on Myanmar for their behavior. Empirically, they have worked. Foreign direct investment from the West decreased from $3.14 billion to “$1.34 billion” due to sanctions. Tourism from Europeans is “down by […] half.” People are becoming more and more aware of the atrocities that are occurring in the Rakhine state. However, international relations scholars have posited that if any external force can help solve this crisis, it’s China. China is Myanmar’s “largest trading partner,” composing almost 33% of its trade. Due to China’s involvement in Myanmar’s economy, they may have the upper hand in securing a deal that can drastically limit the casualties in the region, if they can get Bangladesh to properly agree. The biggest place policymakers must look at when dealing with this should be China’s One Belt, One Road Initiative. Some of the infrastructure plans under this project include a multi-billion sea port project in the Rakhine state. Putting hardline pressure with China’s economic investment plans in Myanmar might be the key to getting them to cave in on reforming their human rights policies. Only time will tell.