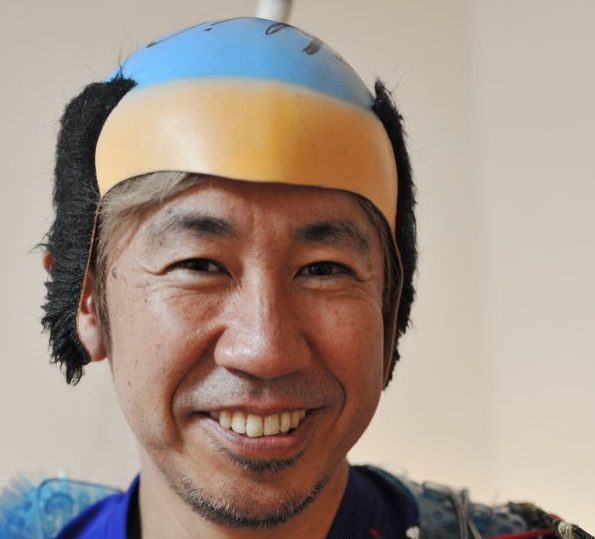 Listen to the conversation here with Tsun-san…

It has been one year since the earthquake and tsunami crushed the northern Japanese area of Tohoko.

I sat in a lecture hall at UCLA over a month ago watching a grown man dressed in a Samurai type goofy warrior costume made from foam and plastic as he gave a presentation. This effervescent, lively individual stood in deep contrast to the  tragic photos and stories he shared with us about the natural disaster that took the lives of 16,000 – 20,000 of his countrymen on March 11, 2011. There were 10,000 casualties in the town of Minamisanriku.

There were striking similarities to the apathy exhibited toward New Orleans and Haiti post-catastrophe. Homes not rebuilt. Grandmothers sleeping on foam pads on the floors of gymnasiums. Leveled neighborhoods with no foreseeable reconstruction plans. Sad, tragic, and wearing.

(Photographer:  Koki Nagahama, Getty Image)
But then, there’s Tsunoda, or Tsun-san as his friends call him. And he’s wearing this ridiculous costume and he’s making us laugh and telling us about the trips he makes up to see the children and families that are trying to rebuild their lives up in this northern area.
He brings the kids soccer balls, he transports washer/dryer sets to homeless families that are living out of public buildings. He brings life and common sense to an otherwise very depressing and confusing situation. He is a testament to the power of laughter and the human spirit.

I wondered how he got involved. How did he end up getting chosen to do this wonderful work? Indeed he is just a regular guy who runs his own shoe store on the outskirts of Tokyo.

When the tsunami hit, he was motivated to travel north to Tohoku and help. In his efforts to organize and pull some resources together, he reached out to the authorities and asked how he could best help. And then something very odd happened. They told him ‘no.’ He couldn’t help because he was not part of an official charity organization. His help was not welcome. The authorities “had it under control.”

Not to be deterred, Tsun-san, said ‘screw it’ and decided to make the trip up anyway. He had shoes and soccer ball and, of course, his costume. When he arrived in Tohoku he discovered that the authorities most certainly did not have it under control. He remembers meeting a couple of traumatized young boys. One of them was the age of his own son. The boy was so grateful that a regular person like him cared enough to come up and do something special for him and his friends.

This is where the lightbulb went off for Tsun-san — that Eureka moment where a person sees clearly that “One man can make a difference.” He continues to make a difference. He has since left his business, his home, and his family. Sixteen more times. He has touched the lives of thousands of people just waiting for a moment of humanity and laughter.

And now, a year later, as the story has moved to the economic rebirth, and rebuilding the Fukushima Daiichi Nuclear Power Plant complex, and to the manufacturing capacities of Honda and Toyota — I take great comfort in the fact that there are people like Tsun-san who are there when we need to be reminded of the small flesh and blood triumphs that can happen through the efforts of singular agents of change.

My hat is off to Tsun-san and his friends in America who are helping him to get the word out about those who still need our help in Tohoku.

In fact, a group of inspired UCLA graduate students from the Luskin School of Public Affairs are making a trip to Japan later this month. They will be led by a handful of Japanese students (like UCLA Master of Public Policy student Masashi Sato who translated this audio interview). They will travel to Japan to gain a better understanding of the country, to see how long-term disaster recovery is progressing, and to extend their academic quest to see how they too can become change agents.

Please check out the recent KTLA interview with UCLA Master of Public Policy student Lindsay Miracle who will be making the journey:  KTLA INTERVIEW

And so we ask you, what YOU can do to be like Tsun-san and those who are following his lead.

For starters, PLEASE visit the websites of the following groups that Tsun-san recommends.

All of these personal volunteer groups have been working on the reconstruction for Tohoku so far, but are in need for financial support as well as actual participants. Although their websites are basically in Japanese, the representative can speak English so that people abroad are welcome to contact them.

Founded by an office worker from Tokyo, Ms. Aya Sasaki. By organizing volunteer bus tour, the nonprofit has consistently taken volunteers, including people overseas, by bus from Tokyo and Kanagawa to Tohoku  since the 311. The number of the people it has taken became over 300. It regularly gathers victims’ needs before every tour and complies with various kinds of requests.

Gakki means music instrument in Japanese. A professional saxophone player, Kazuhiro Takeda launched this personal project. This project is to gather secondhand instruments from all over Japan and send them to the brass band clubs of the middle/high schools in Tohoku. Not only donation but also instruments from overseas are more than welcome.

Ganbaro is an expression to cheer up people like “hang tough!” Mr. Satoru Kikuta, originally from Kesennuma city in Miyagi, established this volunteer group. It provides over 6,000 photos taken in the devastated area with people all over the world through “Flickr” for a price. Two purposes of this activity: first, not to forget the 311 and share the memory with the world. Second, to gather donation to rebuild local food stores and shops and revitalize economy in Kesennuma city.

The Kesennuma-based volunteer group supports all devastated areas along the coast in Miyagi prefecture. The group accepts nurses around the nation and send them to the area in need of medical support. It is open to everybody and any nurse and other medical professionals can participate its activity.