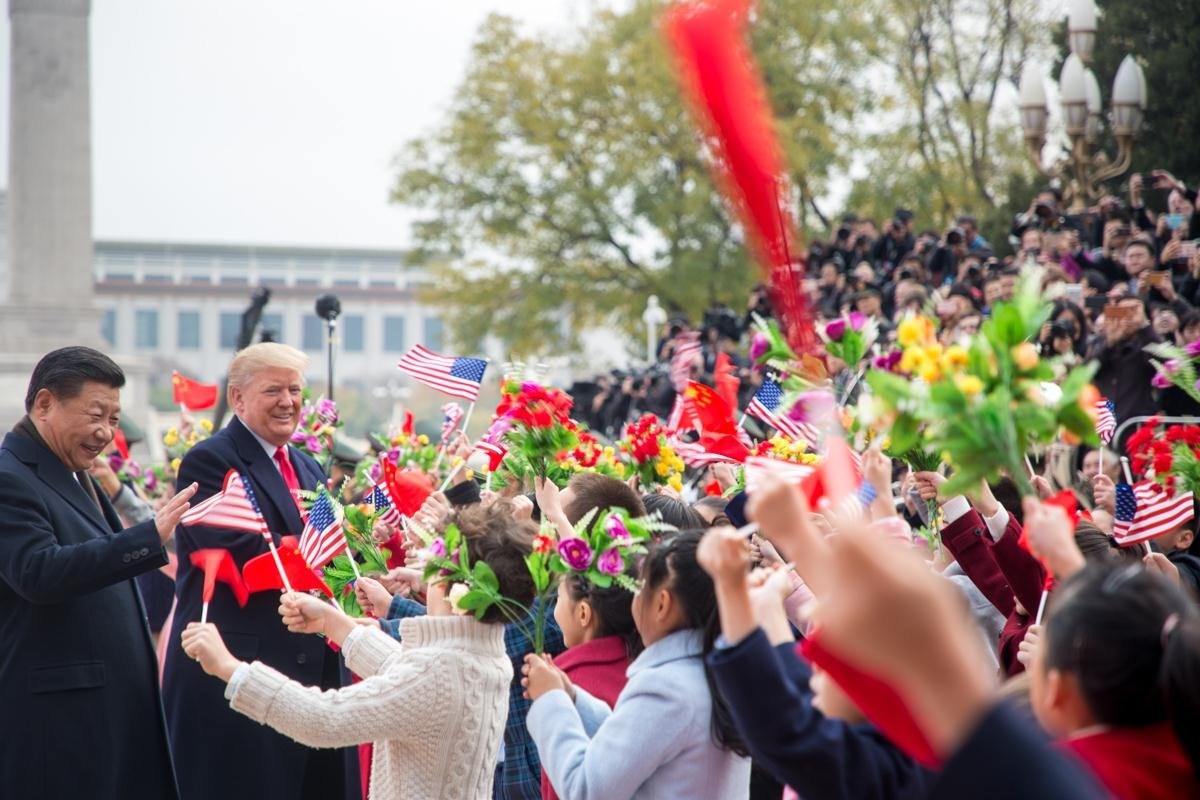 Swept into office almost a year ago now, Donald Trump was elected in part because of his foreign policy promise to restore American dominance and leadership to the world. A key component of this proposal was his assurance that the U.S would no longer be manipulated by China, and would bring the budding world power down to size. Rally attendees shrieked in support at then- candidate Trump’s commitment to no longer “allow China to rape our country.” He promised that once elected, it would be the United States that “would start winning again” on the world stage.

And yet an illustration of China’s leader Xi Jinping graced the cover of the October 14, 2017 issue of The Economist with the caption “the world’s most powerful man.” The description was derived in part from Xi’s speech that week at China’s Communist Party Congress in which he called on China to the lead the world on issues political, economic, military, and environmental. Additionally, the Congress’s decision to enshrine Xi into the country’s constitution, the first Chinese leader gain this privilege since Mao Zedong, further demonstrates his dominance. The Economist’s description of Xi is one that over the past 60 years has been used almost exclusively to describe America’s chief executive. Moreover it is the opposite of what Trump ensured would follow under his tenure.

So what went wrong? Since taking office last January, President Trump’s actions on the world stage have featured an isolationist bent. He has pulled out of the Trans-Pacific Partnership, slashed funding for international aid and investment, and left the landmark Paris Climate Agreement. These moves have consistently undermined his promise to restore America as the dominant player in international affairs and on the contrary have left a power vacuum which Xi and China- both stronger now than ever before- are ready to fill.

On his third day in office, President Trump signed an executive order pulling the U.S out of the Trans-Pacific Partnership (TPP) free trade agreement after asserting that it was bad American manufacturing. Trump claimed the deal would have continued the process of outsourcing to Asia and Latin America while reducing wages at home. The twelve-country pact- the largest in history- was signed with the goal of promoting economic growth, job creation, and innovation. While one can argue over the economic merits of the agreement, there is no question that the original deal would have put both economic and geopolitical pressure on China by projecting a message of American dominance in both East and South Asia.  As Barry Naughton, an expert on Chinese international affairs at the University of California, San Diego says, the TPP has the potential to ensure that the “rules for the global economy will be written under predominant U.S. influence” and this makes China “extremely uncomfortable.” Moreover, by increasing trade with China’s neighbors such as Vietnam, Malaysia, and Singapore, the TPP would have drawn those nations “economically closer” to- and made them more dependent on- the U.S, hence reducing what Naughton calls “Chinese economic preponderance.” This maneuver would have given America more leverage and power in its dealings within the Asian Theater, effectively containing Chinese influence. Such action was therefore antithetical to Trump’s campaign promise to stop China’s growth as an international player and restore America’s “winning” tradition.

In addition to pulling out of the TPP, President Trump’s 2018 budget proposal slashed aid and investment to developing countries by 29%. As the largest development donor in the world, cuts to American aid will adversely affect the economies and stability not only of just neighboring Latin American states but developing countries in East Africa, the Middle East, and Southeast Asia as well. Likewise, cuts to foreign investment further signal an American retreat on the world stage and threaten Trump’s pledge to maintain the U.S’s role as the one indispensable nation. Even if aid fails to benefit the U.S economically, as the President claims, the cultivation of strategic partnerships that aid and investment can foster across the world are of the utmost importance to America if it wishes to maintain international authority. It should come as no surprise that states receiving American aid have an incentive to stay on good terms with the U.S. by voting alongside it at the UN and other international bodies or adopting American-oriented foreign policies. By cutting aid however, Trump is encouraging these allies to seek out other foreign powers- specifically China- for which to tailor their policies towards. For instance, after lashing out at Pakistan on Twitter earlier this month for not doing enough to crackdown on terrorism in its midst, the State Department announced a suspension of aid to the long-time strategic ally in the War in Afghanistan. Already China is pouncing on the opportunity to draw the nuclear-power closer into its orbit by praising Pakistani anti-terror efforts, reiterating Chinese commitment to Pakistan’s safety and security, and reminding the nation’s leaders of China’s pledge to invest $57 billion into rebuilding the country’s infrastructure over the next several years.

Furthermore, if developing nations, as a result of cuts to American foreign aid, feel they can no longer depend on the U.S. as a reliable partner in their quest for growth, they will seek out other economic benefactors that are. In the midst of President Trump’s cuts to such activities, over the next decade China intends to invest well over a trillion dollars in critical transportation and energy infrastructure across the developing world via its One Belt, One Road (OBOR) initiative. OBOR projects include the New Eurasian Land Bridge, a railway that seeks to link China to Central Europe, as well as the construction of a number of ports in Sri Lanka, Pakistan, Djibouti, and numerous others throughout Southeast Asia and Oceania. However as Christopher Balding, an economics professor at Peking University tells it, the project’s purpose is not so much to bring economic benefits to recipients of Chinese aid but “more like a diplomatic effort for [Beijing] to win friends and influence people.” Yet again, by cutting foreign aid and investment, Trump is playing into the hands of Xi and the Chinese to the detriment of American interests.

Finally, Trump’s decision to pull the United States out of the landmark Paris Climate Agreement is also incompatible with his assurances to rein Chinese influence. With climate change being the issue that leaders see as the biggest threat to our world today, the Paris agreement was a prime opportunity for the U.S. to demonstrate its commitment to, and leadership in, solving a global problem. By pulling the U.S out of the agreement, Trump is proving America’s unwillingness and inability to keep its promises as well as a reluctance to lead. By reneging on our commitments to the international community, an opportunity is again left for the Chinese and Xi, who just before Trump’s inauguration called on all signatories to the agreement to “stick to it instead of walking away…as [it] is a responsibility we must assume for future generations.” President Trump’s decision to pull out of the deal cast a pall over the prospect of American leadership on the most important of global issues.

If the President truly wanted to live up to his foreign policy promise to restore American authority in international affairs and stop China’s rise as a global superpower, he would strengthen the U.S.’s economic and diplomatic ties with East Asia by remaining in the TPP, demonstrate American commitment to its allies as well as the growth of the developing world by bolstering foreign aid and investment, and remain an active member of the Paris Climate Agreement as a way to prove America’s ability to lead on the defining issue of the 21st century. By backing away from these commitments however, Trump’s actions have consistently undermined his assurances as he leads the U.S further away from the international dominance he seeks to restore, and instead leaves a void for a nation he calls our “enemy” to fill.