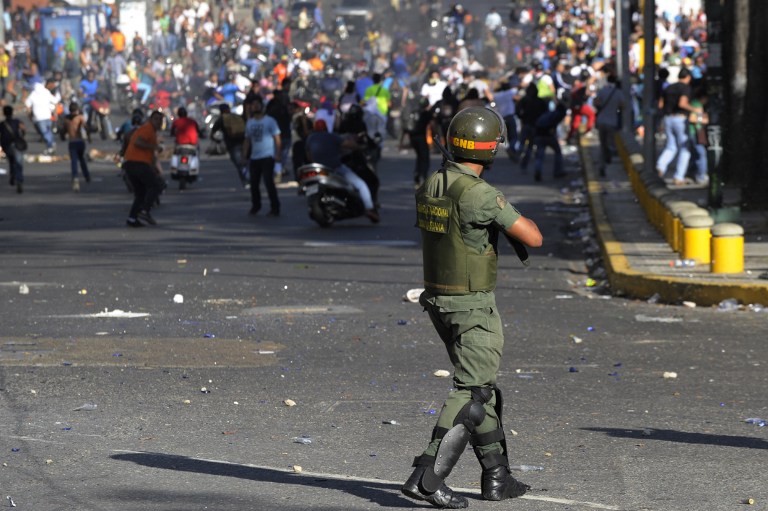 Venezuela’s backslide has been rapid and devastating. Perhaps the most stunning example of the deterioration of the state has been the reemergence of malaria. By 1960 Venezuela had eradicated the disease from its urban areas, which helped set it on a path to economic prosperity for the next few decades. Despite political turmoil and a recession in the late 20th century, Venezuela was regarded as the wealthiest nation in South America up through 2001. Its comfortable perch atop the largest proven petroleum reserves in the world seemed to ensure lasting dominance in the region. Flashforward to today, malaria has spread at the highest levels in 75 years, and sick and dying people are met by extreme shortages of medical supplies in crumbling hospitals. The nation is now engulfed by massive political protests, sparked by widespread frustration over the failing healthcare system, severe shortages of food and rampant government corruption. While the situation may perplex the outside observer, a culmination of problems had been simmering for decades. Above all, the massive reserves of oil that were expected to be a catalyst to prosperity have instead catalyzed its downfall. Venezuela, like many other resource rich countries around the world, has fallen victim to the resource curse.

The first seeds of the crisis were planted in 1999, when the charismatic and deeply polarizing president, Hugo Chavez, came to power. As the price of oil soared in the beginning of the 21st century, Chavez amped up public spending and became the champion of the lower class. His policies – such as fixing the price of foodstuffs and using resource rents to build homes and clinics for the poor – were fueled by profits from the state-run oil company, PDVSA. The initially prosperous regime hinged entirely on the performance of oil in the world markets. When Chavez passed away in 2013, this fragile system was inherited by his political successor, Nícolas Maduro.

In 2014 oil prices fell, PDVSA saw its profits dry up and Venezuela began its tailspin. By several measures, Venezuela has the world’s worst performing economy. In 2016 inflation rose by an astounding 800% and the economy contracted by 18.6%. Hyperinflation has obliterated the salaries of many middle  class citizens. Desperate to make ends meet, people have flocked from cities to the gold mines. The swampy mines are a breeding ground for malaria infested mosquitos, and thus are culpable for the return of the disease. No longer able to rely on profits from PDVSA to import essential goods, the effects of the disease have been exacerbated by severe shortages of medicine. Hospitals lack access to such basic necessities as sutures, gloves and electricity. Similarly, the plummeting value of the bolivar has limited Venezuela’s capacity to afford basic food imports, and as a result the nation faces severe food shortages. Today buying groceries entails waiting in line for hours, with no guarantee of getting what you came for.

Massive political protests and and civil unrest have erupted around the nation as citizens grow increasingly frustrated by Maduro’s inaction. Rather than instituting economic reform he has pointed a finger at the US and political adversaries, and accused them of crafting an “economic war” to ruin the country. Unable to address the crisis and lacking in Chavez’s charisma, Maduro has become deeply unpopular with the Venezuelan people. His approval rating fell to a nine month low of 21% in July 2016. Maduro has reacted by tightening his grip on power and violently suppressing protests. Calls for a referendum to oust him from the presidency have thus far been stamped out by the National Electoral Council, and in March the Supreme Court annulled the democratically elected National Assembly. For all intents and purposes, Maduro has assumed the role of dictator with minimal checks and balances on his power.

Unfortunately, Maduro’s failure to acknowledge the root cause of the crisis has made it impossible for any meaningful changes to occur. Venezuela’s economic woes are not the design of political opponents, but rather the result of the gross mismanagement of oil wealth. The problem may seem counterintuitive; massive reserves of crude oil should be a blessing to a developing country. Nonetheless, this phenomenon can be observed in resource rich countries all over the world. The resource curse is multifaceted and complex, however there are three components that are especially relevant to Venezuela’s current situation: Dutch disease, trade shocks and corruption. Dutch disease occurs when resource exports cause a country’s currency to rise in value, which makes other export activities – such as manufacturing – uncompetitive in world markets, and effectively crowds them out. Dutch disease creates an economy that is vulnerable to trade shocks and the volatility of natural resource revenues. In Venezuela, crude oil now accounts for 96% of total exports, and thus the economy is extremely sensitive to any fluctuations in oil prices.

Perhaps the most fundamental consequence of the resource curse in Venezuela, however, has been widespread corruption. The government’s ability to use oil wealth to fund projects decreases tax burdens placed on its citizens. While this may seem like a benefit to Venezuelans, it also has the effect of decreasing the government’s accountability. Massive influxes of oil wealth combined with weak institutions and low transparency have created an environment of rampant corruption.

The good news is that the resource curse can be broken. The evidence is in the case of Botswana. Botswana is one of the most resource-rich countries in the world, especially notable for its abundance of diamonds. Unlike most resource-rich developing countries, Botswana has experienced marked economic growth and stability for the past several decades. In fact, the government has been so stable that in 2013 the leading diamond conglomerate, Da Beers, relocated its sales department to Botswana’s capital city. Botswana’s success has been attributed to sound democratic institutions and strong private property and anti-corruption laws. Of course, Botswana and Venezuela are different nations with different histories, and thus policies that work in Botswana may not apply to Venezuela. However, it should be noted that corruption in Venezuela has not been a constant. In the 1960s, Venezuela boasted a democratic government with high levels of transparency, which served as a model to other developing Latin American countries. The increase in corruption in the 1970s directly coincided with a boom in the oil industry. If nothing else, Botswana is a testament to the importance of strong institutions and transparency in the management of natural resource wealth.

Venezuela has now reached a breaking point. Maduro repeatedly demonstrates his unwillingness to implement critical reforms, and with each passing day it seems less likely he will surrender power peacefully. A political change is necessary, and as pressure mounts, a regime overthrow appears imminent. Maduro’s successor will have to act quickly to pull Venezuela back from the brink. With proper leadership and reforms, Venezuela could return to pre-crisis oil production within five years, and would be able to import enough basic goods to alleviate crushing shortages. To start, the new government must increase transparency and move away from Chavista socialist economics by adopting market-friendly policies and ending its reliance on PDVSA to fund social programs. In the long-term, major institutional reforms will be necessary to ensure a stable democracy and a prosperous economy. Furthermore, reviving idling manufacturing and agricultural industries will be vital to diversifying the economy and curing Dutch Disease. These changes will not happen overnight. However, with the responsible management of oil wealth and good governance, Venezuela could eventually transform its resource curse into a blessing.