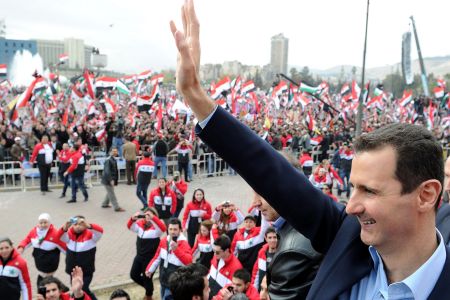 Syria today is, put simply, a catastrophe. Caught in a vicious cycle of violence, a civil war rages. The government commits war crimes against its own people. Rebels retaliate. The resultant instability of the country practically invites in the terrorist group known as Daesh, ISIS, ISIL, or Islamic State. But as millions of displaced citizens flee the country en masse, the president presides over the situation with an eye to the future.

Bashar al-Assad, despite his almost reluctant ascension to power in the wake of his father’s death, has been the president of Syria for the past fifteen years, and given the extreme nature of the ongoing civil war he clearly does not intend on relinquishing that power. In fact, he appears to be manipulating his country’s dire situation to his own political advantage. Between his strategic strikes on Syrian opposition forces, his response (or lack thereof) to the threat of Islamic State (IS), and now Russia’s involvement on Assad’s behalf, the Syrian president is positioning himself to remain the only viable leader for Syria.

Since March 2011 government forces have been under investigation by the UN into human rights violations, and since 2013 the regime has been accused of chemical weapons use against its own citizens. But recently the focus has shifted from Assad’s alleged war crimes to his strategic targets. The United States claims that pro-Assad forces have been targeting moderate, Western-backed rebels, rather than more dangerous jihadists like Jaish al-Fatah, an alliance including extremist groups like the Nusra Front. This choice is clearly deliberate, based on politics rather than on military strategy. Assad maintains his appearance of fighting for Syrian stability by defeating the violent rebels. But the decision to battle specifically more moderate opposition permits extremists to thrive, cultivating fear in the Syrian people. Thus, Syrians must turn to Assad for deliverance.

Similarly, Assad and his supporters have strategically responded to the Islamic State invasion of Syria. From the beginning when IS took control of oil production facilities, the regime has continued to buy from these same facilities, literally feeding IS funding. Furthermore, Assad believes that IS does not pose the most direct threat to Damascus. So he focuses his military forces on rebel groups rather than on IS, essentially allowing the organization to conquer some areas in the north of Syria, recruit sympathizers, and terrorize the rest of the population. But Assad does not ignore the imminent threat of IS. On October 4th, just days after Russia began its airstrikes, he warned during an Iranian TV interview that failure in Syria’s campaign against IS would “destroy the Middle East.” This combination of inaction against IS and public statements about the dangers it poses only serves to increase levels of concern, both in Syria and in the international community, demonizing IS and elevating Assad as the more reasonable leader.

Already Assad has a strong base of support, which has mobilized against his opposition often using brutal tactics. By relying only on his most trusted units during the initial insurgency in 2011, Assad managed to hone the Syrian Army down to totally committed regime supporters. Reinforcing the Syrian Army are pro-Assad militias, mostly consisting of Alawites led by distant Assad family members, but also including minority groups desperate to defend their communities against opposition fighters. Finally, both Iran and Hezbollah provide direct support to pro-Assad efforts. But now an even stronger ally, a major global power, has joined forces to fight for Assad – Russia.

On September 30, 2015, Russia began airstrikes in Syria, allegedly contributing to the effort against IS and “terrorists” in Syria. However, from day one of the airstrikes U.S. officials, including Secretary of Defense Ashton Carter, claimed that these air strikes were not on IS-held territory. Instead, many have struck Syrian opposition forces, including U.S.-backed “moderates.” Indeed, as Russia’s involvement in Syria has increased, its focus has proved to be the rebels. This is because the Russian definition of “terrorists” is the same as Assad’s – any group opposing the government. President Vladimir Putin has acknowledged that Russia’s priority is to ensure that President Assad remains in power (contrary to the wishes of the majority of the international community), so it follows that the primary targets for Russian attacks are the non-IS Syrian rebels who pose the gravest threat to Damascus.

Russia and Syria have maintained a close relationship since Syria achieved independence and aligned with the Soviet bloc during the Cold War. Over the course of that relationship, the two countries have developed economic and cultural connections, most important of which appear to be Russia’s warm-water port at Tartus and its lucrative arms exports to Syria. For Putin, it is critical that Assad remains in power in order to prevent a potentially catastrophic regime change in Syria and prove the strength of authoritarian leaders. Stakes are high now that Russia has committed tangible support to Assad by commencing air strikes; at this point, Assad’s failure would make Russia look weak as well. So Assad can rely on Putin’s pride and stubbornness to ensure that he will receive all the support Russia can provide, paving the way to eventual victory.

Once the opposition forces are neutralized by the Russia-Syria team, Islamic State will be Assad’s only enemy left in Syria. And with an international coalition, led by the United States, already battling IS, this particular “Daesh” brand of Islamism will eventually be crushed, leaving Bashar al-Assad as the last man standing – just as he planned.