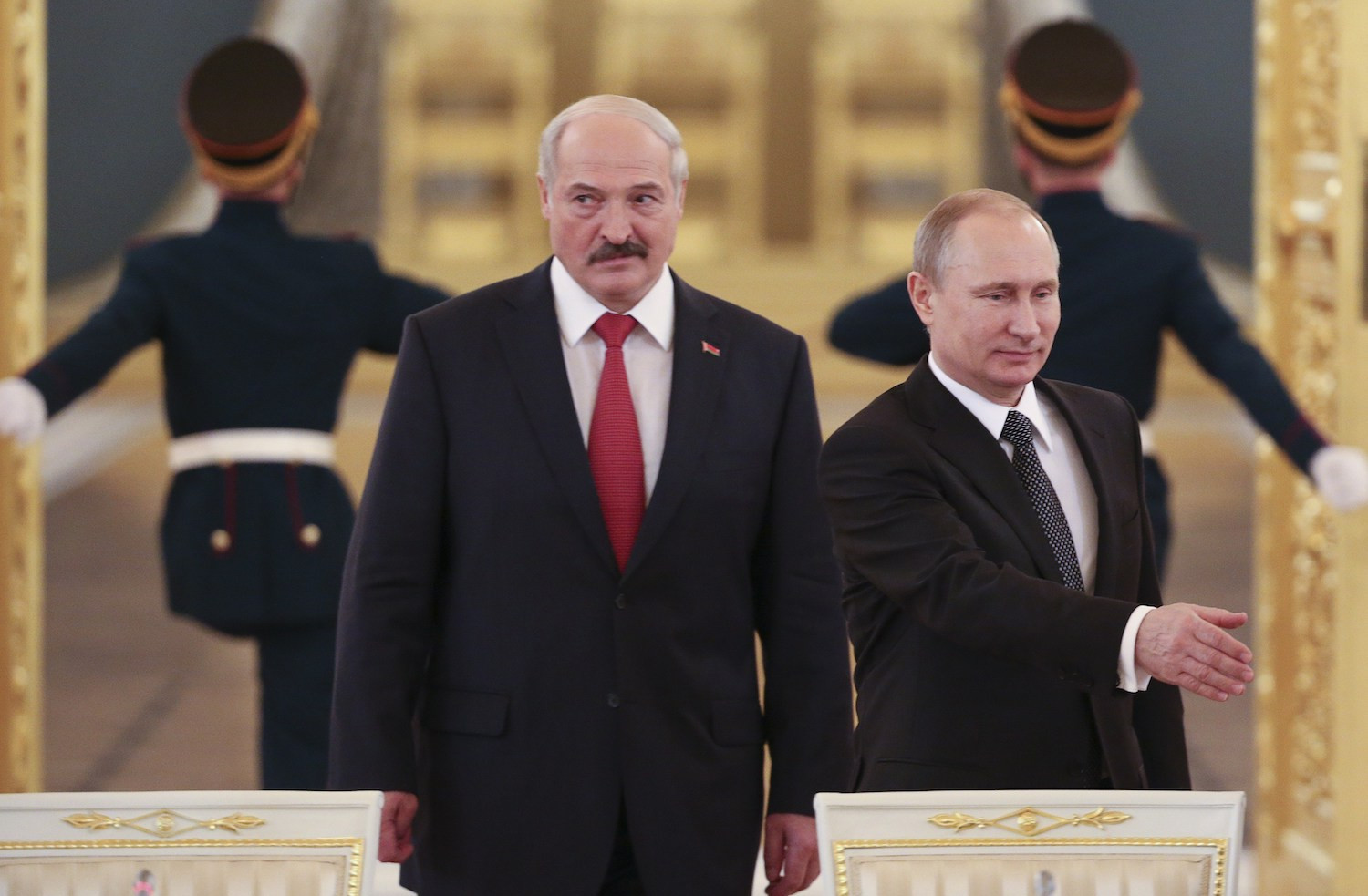 In response, an embattled Lukashenko announced that protesters would have to kill him first.

Mr. Lukashenko, often referred to as Europe’s last dictator, was elected in 1994 as part of Belarus’ first national election post-Soviet dissolution. A year after taking office, he won a questionable referendum that gave him the power to dissolve the legislature, and in the following year, created a legislature and judiciary subordinate to himself, essentially giving his decrees the force of law. As a result, except for the 1994 election, Belarusian democracy has not seen the light of day.

Not only did Lukashenko consolidate his power domestically early on, but he also sought closer ties with Russia. In 1999, Lukashenko and then Russian President Boris Yeltsin signed a treaty intended to reintegrate the two nations by creating a confederation known as the Union State, in which the two nations would remain sovereign but would share a government. Although the date when full integration would occur was left unspecified, on a visceral level, the Belarusian flag and national seal had already been altered to reflect Soviet-era designs, borders were opened, and the Russian language was elevated, while Belarusian was suppressed. In the power-political arena, ‘oil was traded for kisses,’ as Russia granted Belarus significant energy subsidies to prop up its anemic economy, in exchange for its geopolitical loyalty as a strategic buffer against NATO.

However, let us get one thing straight: Belarus is not a Russian client state, at least not from Lukashenko’s perspective. He has long played Russia and NATO against each other, taking part in NATO programs to alleviate Western sanctions, while welcoming Russian assistance, much to Putin’s dismay. As a result, Belarusian-Russian relations have soured. The Union State remains unfulfilled, and as Lukashenko continues to demonstrate his willingness to stray from the Kremlin’s expectation that he be a willing Russian stooge, Putin’s frustration towards him has naturally increased.

For instance, concerning Russia’s ongoing conflict with Ukraine, Lukashenko has refused to side with Russia, citing Article 18 of the Belarusian Constitution, which stipulates Belarus’ goal of neutrality. In retaliation, Putin slashed subsidies, making their return contingent on the Union State’s fruition. Recently, Lukashenko has accused Russia of attempting to bully Belarus into full integration, and in July, Russian mercenaries were arrested in Minsk, accused by Lukashenko of being a part of a Kremlin plot to install Tikhanovskaya in power. However, Lukashenko’s accusations are nonsensical, since Tikhanovskaya herself opposes closer ties with Russia.

So why is Putin so interested in creating a Union State?

Previously, the fruition of the Union State would have created a new powerful leadership post, a position that Putin, who was barred by term limits from remaining as Russia’s President after 2024, could have filled legally, thereby exerting dominance over both nations. However, in July, Putin was able to win a questionable referendum, allowing him to skirt the term limit restriction and remain in power until 2036.

From a balance of power standpoint, his interest lies in creating a consolidated Russian Eurasia, a motive in line with Russia’s previous annexations of Crimea and Georgia. Consequently, having secured access to the Black Sea, Putin set his eyes on the Baltics and the strategic Russian exclave of Kaliningrad, which is cut off from Belarus, and by extension, the Russian mainland; by a narrow sliver of the Polish-Lithuanian border known as the Suwalki Gap. Should Putin attempt to forcefully ‘bridge the Suwalki Gap’ to reconnect Kalinigrad to the Russian mainland, Russian troops would have to travel through Belarusian territory. Therefore, such a scenario is contingent on Belarusian acquiescence, or Russian ability to ensure compliance through a unified government.

Regarding the Suwalki Gap, LTGEN (Ret.) Ben Hodges, former Commander of US Army Europe, asserts: “Deterring any potential action [by Russia] — or even the threat of action — against Suwalki is therefore essential for NATO’s credibility and Western cohesion.” Through a military Enhanced Forward Presence (EFP) in the Baltics and Poland, NATO can reassure its defensive commitment while deterring Russia. On the other hand, should NATO fail to counter Russia’s move to ‘bridge the gap,’ such a scenario would drastically undermine NATO’s credibility to provide collective security, essentially rendering the alliance meaningless. This in turn, would invite further brazen Russian aggression. Therefore, the risk of Russia’ bridging the gap’ not only lies with the Baltics being cut off from the rest of NATO, but threatens the very existence of the organization itself; a possibility which no doubt entices Putin.

As part of EFP, the Trump Administration recently announced the redeployment of 1000 soldiers, and the relocation of V Corps Headquarters from Germany to Poland. In response, Lukashenko placed his military on ‘high alert,’ citing the ‘threat’ to Belarusian territorial integrity. According to Lithuanian President Gitanas Nauseda, Lukashenko’s efforts are “to divert attention from Belarus’s internal problems … with totally baseless statements about imaginary external threats.”

As boasted by Belarusian state news media, Lukashenko was able to secure Putin’s promise that “comprehensive [military] assistance will be provided to “ensure the security of Belarus in the event of external military threats.” However, it is essential to note that this  ‘comprehensive assistance’ falls under the premises of Belarus’ membership in The Collective Security Treaty Organization (CSTO), a Russian-led military alliance, and Putin has not explicitly expressed his endorsement of Lukashenko remaining in power if he cannot deliver on the Union State.

But the real question remains: Given the imminent risk posed to the Lukashenko, will Putin intervene in Belarus?

The short answer is, probably not, unless a change in Belarusian leadership involves an abrupt shift towards the West and away from Russia. The current spate of protests are primarily anti-Lukashenko and lack the anti-Russian sentiment present during the Euromaidan protests in Ukraine. While Putin has leveraged hyper-nationalist ethnic Russian ‘compatriots abroad’ to undermine sovereignty in ex-Soviet Bloc nations in the past, given the existing semi-union, it is far less costly for Putin to achieve a Union State through soft power alone, rather than through military force. Therefore, if Putin chooses to send his ‘little green men’ to Belarus to prop up the existing government, Belarusian public opinion will turn solidly against Russia, viewing such an attempt as an effort to silence the voice of the people.

Having said that, should Tikhanovskaya continue to rise in popularity and place the possibility of a Union State in jeopardy, Putin’s best option would not be to intervene militarily, and certainly not to call for new elections (that Tikhanovskaya could win). Instead, he should attempt to back a transfer of power from Lukashenko to a member of the Belarusian elite, such as pro-Russian Viktor Babariko. Babariko, who intended to run for president in the 2020 Election, was arrested by Lukashenko in July. According to an unofficial internet poll conducted by popular Belarusian news site Tut.by, over half of respondents were ready to support Babariko over Lukashenko.

On the off chance that Putin chooses to intervene militarily and back Lukashenko, there is no doubt that he will expect Lukashenko’s full and unbridled cooperation towards achieving Belarusian-Russian integration. Putin certainly has not been subtle in signaling these wishes, recently telling Lukashenko: “I expect that your statesmanship will facilitate the further development of mutually beneficial Russian-Belarusian relations … as well as the further enhancement of cooperation within the Union State.”

Given his motivations, Putin’s cost-benefit calculus is no doubt firing on full cylinders. As a result, as events continue to unfold, one can only wonder if he will choose his course of action wisely, and if he does not; how NATO forces will counter if faced with a potential Suwalki Gap scenario.