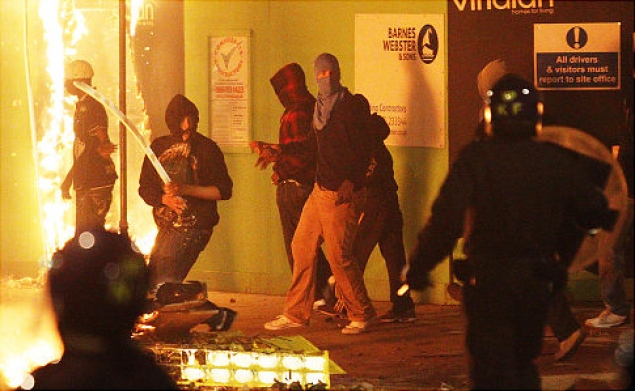 The London riots in August 2011 were an embarrassing display of extreme violence and civil unrest. The factors which led to such an outburst of anger have been widely speculated on, and even now it is difficult to infer precisely what they were, or to which group’s actions they apply. The people involved were numerous: the black population, the white population, the Asian population, gangs, juveniles, those over forty, and so on. Thus the motives for the riots are several, too. A short-term trigger was undoubtedly the shooting of a 29-year-old black man in North London, which sparked off much protest amongst the black population in that area; however other factors include enraged responses to the financial crisis and to the recent increase in university fees, and to perceived governmental neglect. Statistics show that 35% of rioters taken to court were claiming out of work benefits, supporting the theory that those hit worst by the financial crisis were expressing their frustration.

In spite of such an indubitable figure, my own experience of living in London has impelled me to adopt a different view of why many of the rioters behaved as they did. I would argue that that over those few days, Londoners were exposed to primarily motiveless violence and greed. This opinion comes from my personal interaction with those of my generation living in London. Countless times have I been told stories of friends of friends who delight in bragging about various thefts and acts of vandalism. If you watch footage of the riots on YouTube, indiscriminate violence and senseless looting is evident. One particular video I would recommend is a BBC audio clip of two girls constructing an inarticulate and very flawed argument for why they enjoyed “free” wine at nine-thirty in the morning (type “riot girls brag about violence” into YouTube).

Concrete figures further support the interpretation that the riots were fuelled by base crime. 19% of rioters arrested in London were gang members, an extremely high proportion. 75% of those in court had a previous conviction or caution. Criminal Justice Minister Nick Herbert adeptly summarised that “the fact that half of recorded crimes were for offences like stealing and looting shows that most of what we saw was motivated by opportunity and greed.”

If it has been established that the majority of the rioters were motivated by a primitive desire for violence and unpaid-for products, it is important to draw attention to the rioters’ total lack of respect for the law. This factor certainly is significant in explaining the extent to which the looting escalated. The police are of course at fault here too; they displayed humiliating inefficiency and a lack of resources which unquestionably worsened the situation. However, this leads us to a series of more poignant questions. Why were so many British citizens drawn into generating senseless violence? Why were they so unconcerned by not only the structure of the law but, moreover, by the expected moral view that one should respect other people’s possessions?

Family Action, a charity for disadvantaged families, provides one answer. They believe that the riots were a manifestation “of the way society has failed some of the poorest and most disadvantaged” people in the UK. Whilst I consider this excessively justifying those who should be held accountable for their actions, it is clear that for some time society has been lacking a way of instilling moral values in its people, whether through social programs or through supportive familial structures. The next question to consider is how the UK addresses this problem, and whether harsh prison sentences, of which many were dealt, are the answer.

All figures and quotations cited are from the BBC.