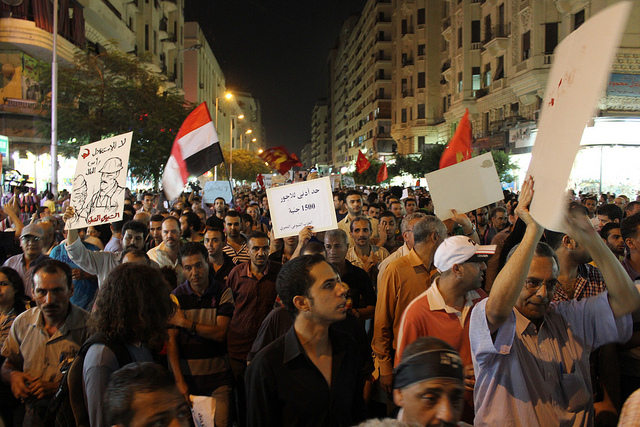 A few years ago, at the peak of Arab Spring, Egypt had become emblematic in the mindset of neighboring countries struggling to peacefully transition their governments from long-running dictatorships to democracies. A turning point in the 2011 Egyptian Revolution was the overthrow of President Mubarak, resulting in the country’s first democratic election since 2005. The Muslim Brotherhood assumed office with a disproportionate sway of votes, and despite the Brotherhood’s frequent clashes with the military, the army still enjoyed many of its previous privileges. As a result, the military faced little resistance in declaring the Brotherhood as illegitimate earlier this year. The circumstances leading to July’s military coup d’état, especially within the early years of a newborn revolution, may add to further understanding the roots of the movement. In addition, tracing the history of Egypt’s military and its influence on the country’s recent progress allows for the prediction of future events in Egypt while gaining insight into the country’s civilian movements.

To begin, in comparison to its pre-revolution intervention, the army took a less aggressive stance towards the civil disobedience leading to Mubarak’s fall. Nonetheless, protesters faced harsh retaliation by the security forces loyal to Mr. Mubarak, leading to hundreds of deaths and many more injured as reported by Al Jazeera. This scenario, however, was not repeated with Morsi in 2013. Through a coup, at the peak of the opposition movement, the military suspended Morsi from office and appointed the head of the Supreme Court, Adly Mansour, as the interim President until new elections could be held.

Moreover, it is also important to consider the significant historical role of the Egyptian military. Dating back to a much earlier revolution in 1952, it was a military coup that ended the long-running British occupation. From that event onward, through President Sadat’s assassination and Mubarak’s presidency, the military established itself as a core element of the nation’s identity. In addition, President Sadat attempted to establish strong relationships with the West, particularly America. Such efforts have allowed for the United States’ continued support of the Egyptian military. According to a report by The Huffington Post, part of this support includes an annual aid of $1.5 billion to the Egyptian military. This aid, however, was put on a hold after the recent military coup.

After the 1952 revolution, many of the existing Islamist groups were declared as illegal and brushed aside by Sadat and Mubarak. The army had a significant role in enforcing this doctrine. As a result, many years later in the 2011 revolution, when the long suppressed Muslim Brotherhood came to office, the party seized the opportunity to retaliate against many years of suppression enforced by the military.

In the deeply rooted hatred between the army and the Brotherhood, the army took no action in suppressing civilian movements against Morsi’s government. On the contrary, the institution saw an advantage to utilizing public opinion in order to highlight the Muslim Brotherhood’s incompetency. Additionally, as noted by Kareem Fahim’s recent article in The New York Times, Mr. Morsi took many initiatives to grant himself broader executive powers. Such attempts included removing a number of high-ranking generals in the military. In another situation, Morsi rejected the military’s draft of the constitutional declaration and replaced it with one he had written himself. The later document allowed the executive branch to exercise and enforce more political power, especially compared to the army. Continued power-extension strategies by Morsi ultimately led the army to suspend the constitution and remove Mr. Morsi of his presidency in the recent coup. Since the public was not completely united in removing Morsi from power, a number of protests erupted in support of the President.

It is important to note that the political and social aspirations of the 2011 Egyptian Revolution differed significantly from those of the movements in the past few months. Nevertheless, the main reasoning behind both uprisings was very similar: namely, that the actions of the government alienated and frustrated the people of Egypt by taking advantage of its privileges in order to convey specific political agendas.

In 2011, a considerable number of factors led to unified public resistance against the government. According to an article by The Guardian, some factors included youth unemployment, weakened foreign policy, human right abuses and corruption. The accumulation of these issues led to the fall of Mubarak’s regime. In the 2013 protests, however, the hopes of people for the newly elected government were diminished due to the regime’s inability and refusal to address the aforementioned challenges. Instead, Morsi attempted to give more power to the Brotherhood’s religious agenda. As mentioned in a poll by The Egyptian Center for Public Opinion Research, “78 percent of Egyptians see that the Muslim Brotherhood’s rule was worse than they had expected.”

Nevertheless, a significant difference between the recent movement and that of 2011 is that people have not been as united in opposing Morsi as they were in removing Mubarak. In another poll from The Egyptian Center for Public Opinion Research, it was reported that 71 percent of Egyptians were “unsympathetic with pro-Morsi protests.” These statistics indicate significant disagreement between the Egyptian people themselves on choosing the political party they believe could lead the country towards economic and social prosperity.

Tragically, the protests led by pro-Morsi supporters faced backlashes from both the army and the groups opposing the Brotherhood, resulting in devastating casualties. In a report by The Telegraph, 525 people have lost their lives and 3,717 have been injured as of August 17, 2013, and the numbers continue to rise. According to The Guardian, more specific figures are not available, as the army has stayed silent on the total number of people arrested and killed.

The Egyptian political sequel over the past few years suggests that the 2011 Revolution wasn’t just about a change in the country’s leadership. Protesters didn’t belong to one specific organization. Different political parties such as the April 6th Youth Movement and the Salafists also stood alongside Pro-Morsi and Pro-Mubarak protesters. Each organization addressed a number of shortcomings by the Mubarak era policies.

Even though the media have given much attention to the coup and its aftermath, the approach to solving the country’s social and economic issues has remained unattended.

The military has assigned an interim government until future elections, though the specifics of this process have been left out. In addition, Mr. Mubarak was recently released from life in prison to house arrest by a retrial of Egypt’s highest appeals court. If the same pattern continues, the Egyptian revolution may lead to where it started in 2011, with hundreds of lives lost and thousands injured.

With the military continuously enforcing its power, the future of Egypt remains unclear. Nonetheless, no matter the party that will eventually lead the country, it should keep a number facts in perspective: recognition of the countless individuals who lost their lives for defending their civil rights, establishing a government elected and supported by the majority of Egyptians, and prompt attention to the social and economic issues that have been rooted in the core of all the uprisings.

Facts and figures from ABC News, Al Jazeera, The Guardian, The New York Times, The Telegraph, Time and The Egyptian Center for Public Opinion Research.

Erfan Faridmoayer is a fourth year undergraduate student majoring in Molecular, Cell and Developmental Biology and minoring in Near Eastern Languages and Cultures at UCLA. He is also a co-editor for The Generation.