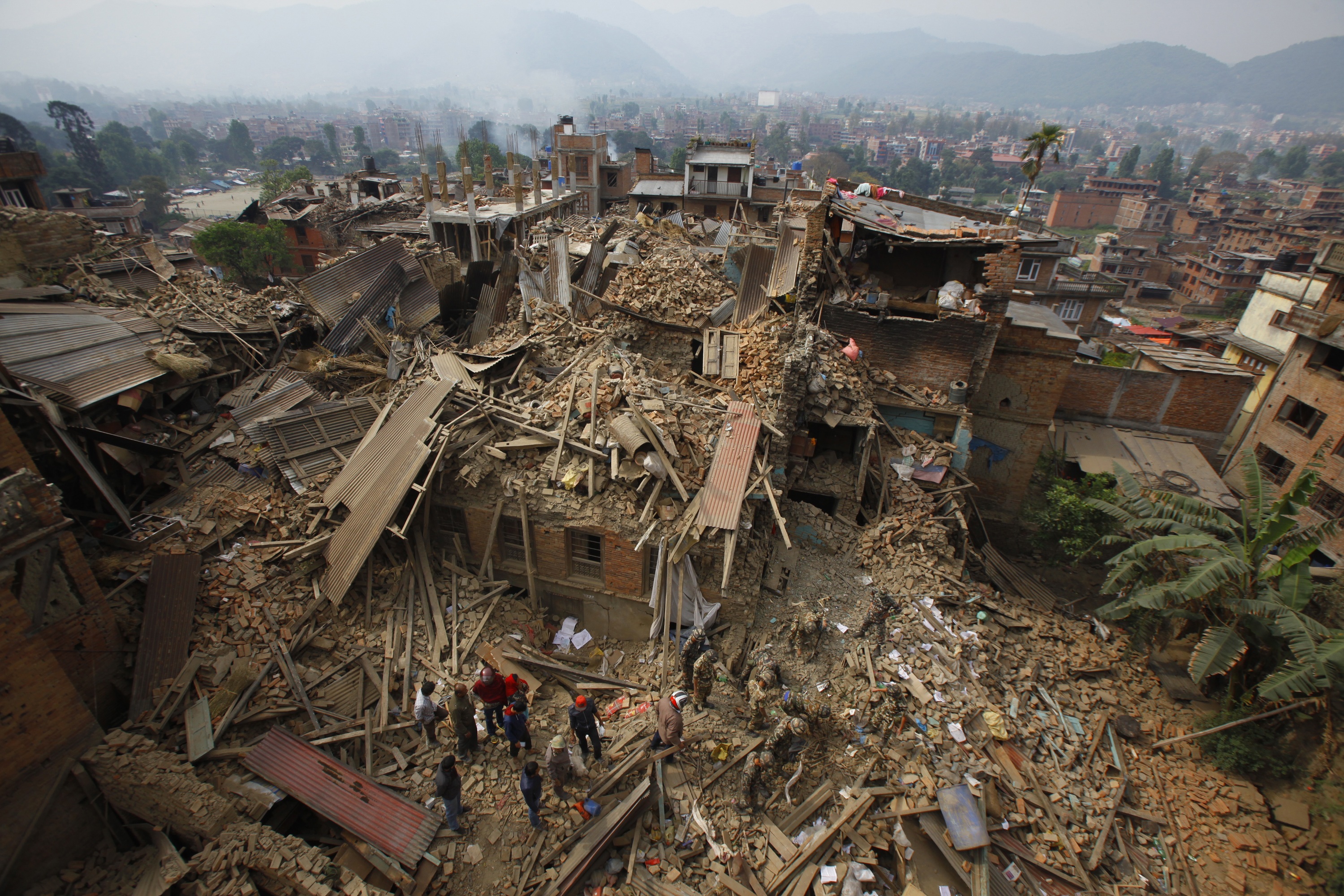 On April 25th, 2015, an earthquake the size of Everest struck just outside Kathmandu, the capital of Nepal. As the number of days grew since the catastrophe occurred, so did the count of victims killed or injured.  The 7.8 magnitude earthquake devastated almost a quarter of Nepal and the surrounding areas in China and India, and triggered an avalanche on Mount Everest that would have made international headlines in itself.

As with any natural disaster of this caliber, international aid poured in.  The handful of U.N. agencies dealing with these types of crises responded immediately, as did governmental organizations and NGOs from several countries.  Yet somehow, victims in the rural parts of Nepal ⎯ an already small country relative to surrounding giants China and India ⎯ suffered from a lack of aid.  Is it because the various responding agencies knew where these people are, but had trouble accessing them due to the difficulty of destroyed roads, collapsed infrastructure, and ruptured ground?  Were they able to access these rural areas only to find that they came with too few provisions to meet the needs of the droves of victims?  Or, is it simply because these agencies were experiencing trouble locating these people?

I contend that the responding agencies were challenged by a combination of all three possibilities.  Although scientists had predicted this earthquake would occur for the past ten years and despite the Nepali Government’s earthquake preparation efforts, the poor state of the country’s infrastructure challenged response teams in reaching rural areas outlying Kathmandu.  The capital served as an air base for helicopters transporting aid throughout the affected area.  However, unlike the Haiti Earthquake in 2010 where a U.S. Naval ship carrying an immense supply of aid arrived directly offshore, Nepal is landlocked and requires land and air-based shipments of aid⎯both of which take much more time to match the supply of sea-based shipments.

As anyone might expect when a natural disaster strikes, the situation presents complications concerning gas and electricity, and few homes in the rural areas outside Kathmandu have access to clean water.  What’s more, lack of clean water in rural areas could force victims to rely on polluted water⎯a situation that almost guarantees a cholera epidemic.  In this case, trucks and helicopters were the only alternative lifeline the victims had.  In order to speed up the distribution of aid in the rural areas, two things needed to change.  First, responding teams needed to better plan their deployments with more accurate and timely information.  Second, they needed to consider alternative means of transportation that can augment existing means.

In the immediate aftermath of an earthquake, the best way to visualize the physical impact is oftentimes not the most commonly consulted.  High resolution, timely satellite imagery is our greatest asset for identifying exactly what was damaged, destroyed, where victims are located, and where responding teams can effectively deploy personnel and set up relief sites.  Some of the biggest satellite earth observation commercial companies in the world (DigitalGlobe from the U.S., CNES from France, and Airbus Defense and Space from several European countries) harness the capabilities of their spaceborne satellites to capture imagery of affected areas immediately following a crisis.  Subsequently, they share this imagery with that captured before the crisis (for purposes of comparison) to crowdsourced web-based mapping platforms, such as OpenStreetMap.  The motivation behind this publicization of high-quality satellite data is to enlist as many people as possible in the effort to build a detailed picture of what was damaged and where the victims are.  These efforts resulted in digitally demarcated satellite images that indicate damage as detailed as remote mountain roads.  Below is a picture of the user interface for Tomnod, a service from DigitalGlobe that has engaged a global community of volunteer mappers to digitize damaged structures near Kathmandu.

In turn, crowdsourced mapping agencies distribute the imagery they receive from the commercial satellite providers to their networks of volunteer cartographers who may download and digitize the data on their wireless communication devices while on the ground in the affected area.  Their input is immediately fed into the digital imagery which can be re-shared with countless humanitarian agencies, thus activating a rapid information sharing environment in the aftermath of the crisis.  Although this had been done for Nepal, the service was not nearly as well-known as it should have been.  These tools are revolutionary and need greater marketing on behalf of the humanitarian agencies that respond to crises such as the Nepal earthquake.  If agencies are to use these tools, then they logically benefit from greater public awareness and participation in the associated services.

Although the Google Person Finder and Facebook Safety Check services received much publicity for their use in locating victims of the earthquake in Nepal, it is important to remember that these services require the victims to have access to smartphones in a devastated environment in which even clean water and food are out of reach.  Although obviously well-intentioned, these services face a disjuncture in their actual utility in a situation such as post-earthquake Nepal, especially when it comes to the rural areas.  Instead of relying on the victims in the affected region to respond to SMS text messages (as in the case of Facebook Safety Check) or reference images of lost loved ones on Google.com (Google Person Finder), efforts should be directed at encouraging responding agencies and the broader global community to use their access to technology to help assess the damage and identify where the victims are located.

Finally, responding agencies should consider alternative means of transporting aid to and from the remote areas.  One method for bypassing the limited manpower needed to operate helicopters and drive trucks is adding unmanned aerial systems as a third means to transport aid to and from the remote areas, such as the outlying territories around Kathmandu.  These UASs, more popularly referred to as “carrier drones” , would need to be flown in formation with helicopters whose pilots should follow flight paths informed by the crowdsourced satellite imagery.  The pilot operating a helicopter would control the drones flown in formation.  This is necessary to overcome the complications associated with air traffic control that come with autonomously flying unmanned aerial systems.  Therefore, the drones would serve a complementary role to the helicopters, and when taken together, they could create a synthetic aircraft carrier.  The drones and helicopters could be loaded with food, medicine, and clean water that would either be airdropped or unloaded upon landing.  Effectively, the fleet of drones with the helicopters would rapidly speed up the transport of aid to remote areas.

Theoretically, the Nepal Earthquake could serve as a testing ground for a revolution in the way aid is delivered following natural disasters or humanitarian crises.  New technologies should always be considered for improving response to these situations, especially when they encourage participation from the global community (e.g. Tomnod) and when they can be used to augment existing methods (e.g. carrier drones).  There is no doubt that future events such as the Nepal earthquake would benefit from greater awareness of crowdsourced web-based services such as Tomnod and OpenStreetMap, and from the application of unmanned aerial systems for maximizing rapid delivery of aid.  These proposed solutions may be more complicated to operationalize than they appear at face value, but at minimum, they can serve as a fundamental concept for improving the ways in which agencies respond to natural disasters and/or humanitarian crises.