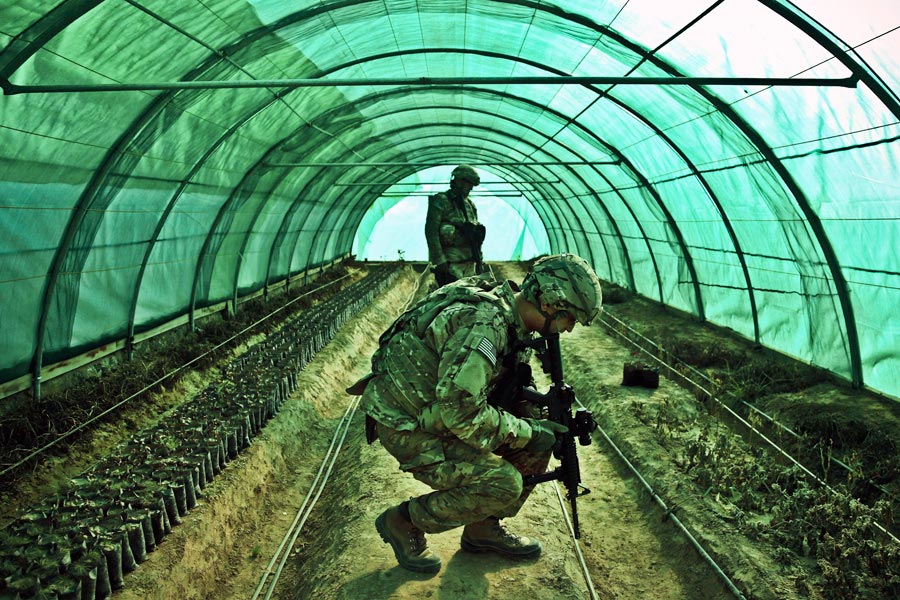 In 1993, Colombian troops shot dead the infamous Colombian drug kingpin Pablo Escobar on his rooftop. To celebrate, they fired their guns into the air while chanting “We won!”. Lee Brown, the director of the U.S. National Drug Control Policy at the time, said Escobar’s fate should “serve as an example to others who traffic in death and misery”. But despite the apparent victory, the New York Times made a sober clarification. Author Robert McFadden noted that, apart from the symbolism, Escobar’s death was “not expected to seriously affect cocaine traffic”. The drug would continue to sell through the various groups that had assembled in the power vacuum left by Escobar’s downfall.

The take-down of cartel leaders has become a recurring story, one that shows the futility of America’s current policy. Earlier this month, New York courts found Joaquín “El Chapo” Guzmán guilty of ten criminal counts relating to his drug enterprise. Guzmán was the leader of one of the largest drug-trafficking operation in the world, which sold cocaine, methamphetamine, heroin and marijuana. He was convicted for this and numerous other crimes, including conspiracy to murder and conspiracy to distribute of heroin, cocaine and marijuana internationally. Now he is likely to spend the rest of his life in prison. Justice was served, law and order prevailed, and America caught the bad guy. U.S. Attorney Richard Donoghue valiantly told reporters after the verdict was announced, “There are those who say that the war on drugs is not worth fighting. Those people are wrong.”

Mr Donoghue’s claim and Guzmán’s conviction seem to suggest it is time for celebration. Perhaps George W. Bush could lend us his Mission Accomplished banner? While the media and the courts savor the conviction of one of the once-most-powerful drug traffickers in the world, it’s worth thinking back to 1993. Let us remember the Colombian troops standing over Escobar’s bloody corpse on the rooftop, shooting into the air and shouting “we won”. Recall what Robert McFadden, the New York Times’ journalist who wrote of Escobar’s death, said following Pablo’s death: beyond symbolism, cocaine traffic was not expected to be seriously affected. Like an echo from the past, while the U.S. justice system was busy dancing with glee, Guzmán’s defence lawyer Jeffrey Lichtman prophesied that “the cocaine doesn’t stop flowing with the take-down of El Chapo”.

The War on Drugs has been waged in the U.S. for nearly fifty years now. Originally a cheap campaign slogan for Richard Nixon in 1971, the U.S. government now spends roughly $47 billion every year fighting the War on Drugs. This ideological war in the U.S. is fueling a very real one in Central and South America. The cartel wars in Mexico have killed more than 200,000 people since 2006. And yet despite the cost of America’s War on Drugs, its tactics have not changed. The fight has assumed a cyclical nature, that goes something like the following:

Some substance, such as cocaine in the 1910s or marijuana in the 1930s, becomes popular among U.S. citizens. The government, who usually extol this kind of free-market supply and demand efficiency, prohibit the substance and its production in the United States. But the free-market keeps kicking and before long a black market emerges, with demand from the U.S. citizens satiated by supply from poorer, less easily-regulated countries. Huge amounts of money are siphoned into cartels, whose leaders subsequently gain immense power and notoriety. If born in the U.S. they might have been respected as self-made entrepreneurs. But capitalism is a nationalist game, and so the U.S. incites a manhunt against such an obvious and out-in-the-open enemy. Multinational coalitions are formed and mass resources spent in the pursuit and capture of said individuals. After years of bribery, murder and evasion of the authorities, the cartel figurehead is either executed or taken into custody. New organizations are then free to fill the vacuum left in their absence. It’s back to square one, with little disruption made to the distribution of narcotics. Despite the media hype that follows the demise of such leaders, reality is typically less optimistic: cocaine remains wildly popular in a post-Escobar world and people will continue to smoke weed despite Guzmán rotting in prison.

The War on Drugs rages on, reinforced by opportunistic politicians after a scapegoat, fanatical law enforcement unquestioningly chasing agendas, and a corrupt private prison industry that’s desperate for profit. But despite being afforded unwavering commitment, it isn’t being won. A campaign of tough love and prosecution has given tremendous power to criminals and left minimal impact on the drug trade. In Mexico, innocent people are dying, while the cartels’ economic power grows similar in scale to that of multinational corporations, positing an existential threat to the sovereignty of their home countries. An abstract war waged against a noun (see also the War on Terror) is not only ambiguous rhetoric used to drum up political support, but, as seen with the War on Drugs, can be the cause of as many casualties as conventional warfare. The War has perpetuated a violent and powerful black market that shows no signs of disappearing. In an effort to protect its own citizens from the ills of substance abuse, the U.S. has put citizens in other countries at risk – prime examples being Mexico and Columbia, with deaths numbering hundreds of thousands for both countries. The War on Drugs must come an end in order to save innocent lives. Alternatives to prohibition need to be considered.

1930s Chicago found itself in a similar predicament to what Columbia and Mexico face today. The ruthless gangster Al Capone ran a powerful crime syndicate that held the city hostage. Capone had taken over from criminal boss Johnny Torrio, who had in-turn replaced James “Big Jim” Colosimo. Just like Pablo Escobar, these criminals were easily replaceable, one after the other. Their business was also drugs, albeit a kind that is now fairly socially acceptable – alcohol. Black-market bloodshed went on for more than a decade until the U.S. Government repealed the prohibition of alcohol. This repeal didn’t completely shutdown the mafia groups, but it did cut off a valuable part of their revenue. In the same way, a well-assessed end to certain contemporary drug prohibitions could seriously threaten the cartels of today.

Marijuana, once the sworn enemy of authorities, is slowly winning its fight against prohibition. A growing awareness of the issues of prohibition have caused a shift in public opinion. As remarkable as it seems, the U.S. Government was defeated by potheads. The War on Drugs had to withdraw from its cannabis front. The futility and hypocrisy of prohibition is starting to show, as more and more evidence proves in favor legalization. The legalization of medical marijuana alone saw violent crime in U.S. border states fall by an average of 13 percent, while homicides related to the drug trade fell by an incredible 41 percent.

The legalization of marijuana, a policy previously unimaginable for much of Western society, shows the need to reassess the approach to prohibition. Rational and sane adults should be free to do as they please in regard to their own bodies, so long as it doesn’t cause harm to others. The slow-setting end of marijuana prohibition is indicative of an alternative to the War on Drugs. Substances too damaging to society should be kept away from it, but the blind and perhaps arbitrary prohibition of certain substances could be re-evaluated. Western society’s tabooing of some drugs is deliberately ignorant of the reality of these substances. Research done on octopuses showed that MDMA reduced the creatures’ antisocial behavior (ravers all around the world could tell you the same thing). There are numerous allegations of our fine and honorable policy-makers using cocaine, yet they continue to rise into successful positions. This is not an endorsement of uninhibited hedonism, but a call to at least inspect the laws, as well as cultural norms, we’ve developed around drugs. These laws tend to punish the poor, marking them with criminal records, while the rich pump money into the black-markets that allow the real criminals to prosper. Separately, addicts are of course a problem for society, but, rational individuals looking to experiment, who are not so susceptible to dependence, are not. Alcohol has its dangers, but Western society has assumed it can be handled well enough by society’s sane majority. This doesn’t apply to certain drugs for sure, but laws arbitrarily drawn up decades ago do not follow a rational methodology or a comprehensive analysis of each case. There is more that can be learnt and understood about these substances. The re-evaluation of prohibition could lead to better regulation of such substances, as well as deflating the barbaric trade that supplies drugs to the West while tearing apart poorer countries with gang violence.

Governments around the world need to listen to the advice of experts and treat drug abuse as a social and health-related issue, not a criminal or military one. The eradication of mind-altering substances is impossible – there will never be a truly drug-free society, and as long as there is demand, supply will find a way. Instead of eradication, governments should introduce policies to address the societal factors that lead to increased risky drug use, in turn mitigating the damage caused by such substances. Wielding prohibition like a blunt battle-axe solves very little and seems to have caused more damage than good. If governments don’t change their approach to narcotics, then men like Pablo Escobar and Joaquín Guzmán will continue to gain wealth and power. The fight against drug traffickers has become something like Heracles’ fight with the mythical Hydra. Each head Heracles chopped off the mythical beast was replaced by two new ones. Cartel figureheads are much the same; their defeat does little to prevent future danger. Heracles defeated the Hydra by cauterizing each decapitated stump, and governments need to take a similarly creative approach. Address the cause, not its symptoms, or else the illness will remain. The end of the cartels will come by exploring alternatives to the costly and ineffective War on Drugs that gives them economic power.