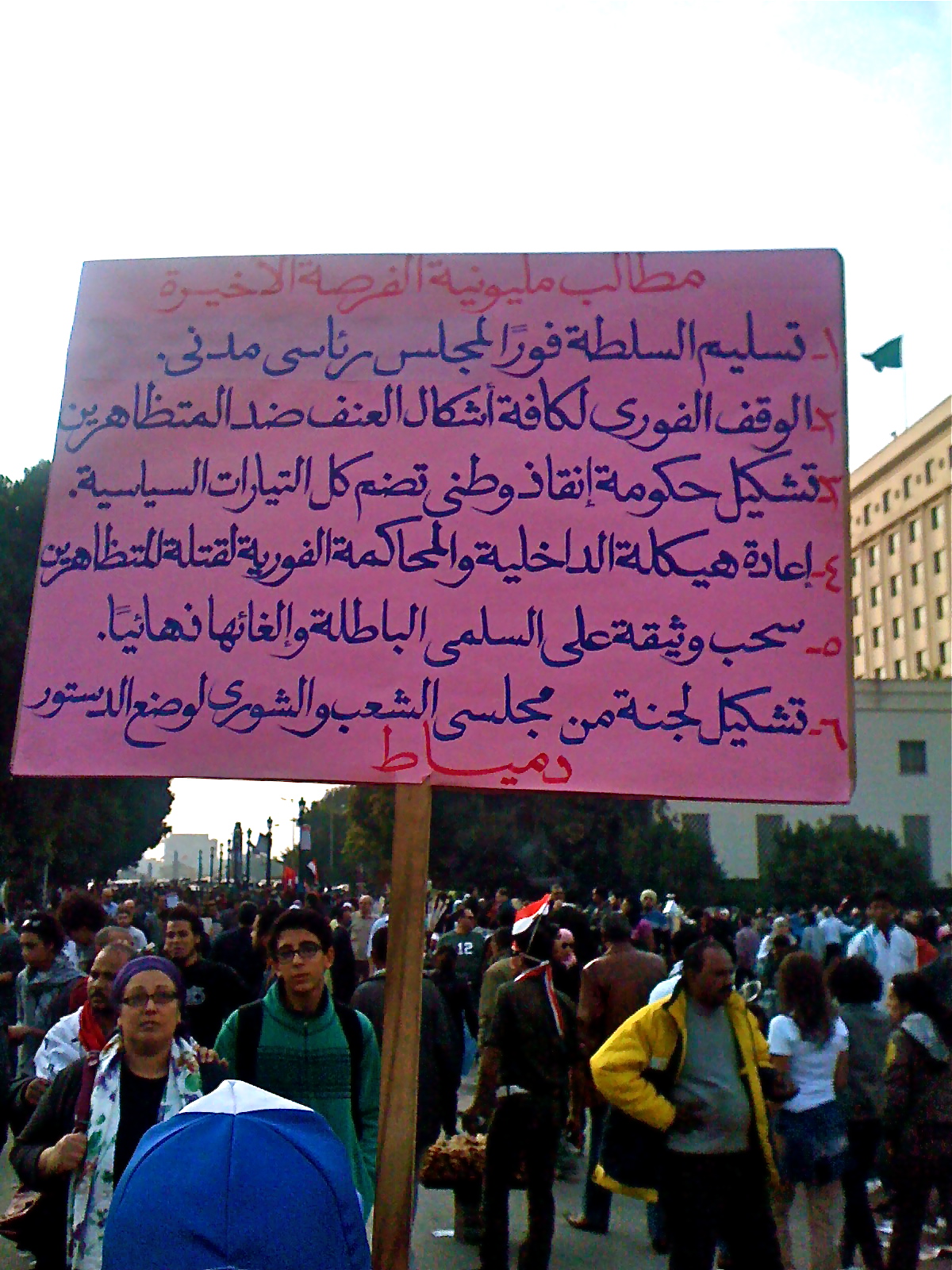 By F.A., Commentary from Cairo, Egypt.

Night cloaked Tahrir Square as the lampposts cast a dim light over the thousands of people gathered in the vicinity. Street vendors and food carts made their way between groups of protesters. We attempted to weave our way through the crowds with boxes of supplies to the heart of the square where protesters were setting up field hospitals. It was the night of the “Millionnaya,” or “Million Man March” on November 22nd. The sky was prickled with banners listing demands and calling for the step-down of Tantawi. Young men dangled from light poles waving Egyptian flags and calling chants that were echoed from below. While the square itself remained fairly safe, the real battle blazed on Mohammed Mahmoud Street, a street leading to the Interior Ministry. A line had been cleared leading from the main street through the square and down Mohammed Mahmoud Street. Every other minute, ambulances, cars, and mopeds carrying the injured zipped through the road. At the first ring of the ambulance siren, the crowd would part and the vehicles would maneuver through the crowd, narrowly missing stray protesters. During the intervals of calmness, groups of young men, their faces concealed with gas masks and plastic glasses would march into the very heart of the battleground. As they walked, they chanted anti-SCAF (Supreme Council of the Armed Forces) slogans. Some of them would return in ambulances during the night, shot in the eyes with rubber bullets or choking from toxic tear-gas the police had released.

One young demonstrator recounted to me the set-up of the street. The police had drawn three lines: crossing the first resulted in tear gas, crossing the second resulted in a spray of rubber bullets, and crossing the third resulted in live ammunition. He himself had stood in the front lines tossing Molotov cocktails. He told me of a man who desperately wanted to throw his Molotov cocktail, but had no hands to reach and grab them. He explained that he had lost both hands as a result of police brutality during the revolution in January. So he grasped the bottle between his wrists and flung it towards the police.

Any protesters in the vicinity of Mohammed Mahmoud street, even those protesting in the square itself (which remained largely peaceful throughout the event), could be subject to wafts of teargas said to contain extra chemicals that resulted in anything from itchiness, to fainting spells and seizures. In the words of many I’ve met, “the government is trying to poison the people.” Those exposed to the gas could be seen with a layer of white dust coating their faces–medicine applied on the face to stifle the sting of teargas.

Police corruption and sheer abandonment of public duties, not to mention exaggerated use of force towards demonstrators, has made protection of the public a collective duty in Egyptian society. In the media, shocking images emerged of police officers beating injured, peaceful protesters and throwing dead bodies in trashcans from the early days of the recent demonstration.

For days, the street leading to the Interior Ministry remained a battleground between protesters and policemen eager to use teargas and rubber bullets. Eventually, the military intervened to form a barrier between the police and demonstrators. Yet this move only came after at least 40 civilians were killed and thousands were injured through police brutality.

The ruling Military Council continues to attempt to stifle calls for a transition to civilian governance. They continue to play a waiting game, resisting demands as demonstrations ebb and flow in Tahrir Square each week. Any changes in government are internal, rearranging leadership by merely recycling politicians and players from the old regime.

A dwindling number of demonstrators continue their sit-in of Tahrir Square. Many of them are families of those who had lost their lives in the protests. Others are protesters that have been injured and have been denied the health care promised by the government. Reports of violence from the square are often attributed to “Baltagaya” or “thugs” that are said to be infiltrators sent by the government, meant to internally cause problems within the demonstrations. Harassment of women during the protests has also been attributed to their presence. These are all attempts to disperse the crowds and discourage the people from attending demonstrations.

While the disillusionment with the current situation can be felt, there is a resilience that brings the people back to Tahrir Square week after week. In many ways, the revolution continues and undermining the long-established military institution is its challenge.