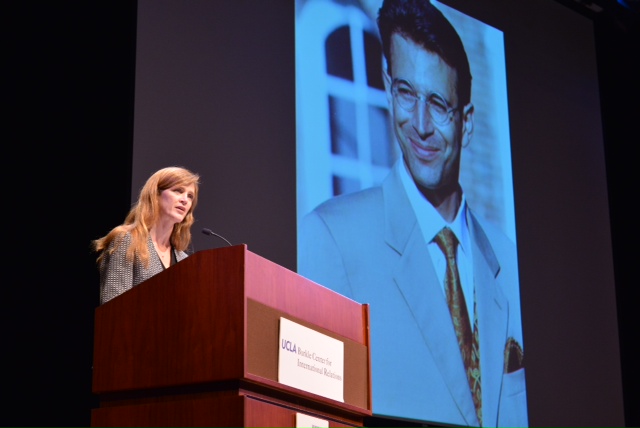 Samantha Power was in the building. Schoenberg Hall, UCLA, to be exact, on February 23, 2014.

Although Ambassador Power is the United States’ permanent representative to the United Nations, she was not there to divulge the secrets of the White House or the UN. She was there as a former journalist.

After a roundtable discussion with a few students harboring their own journalistic ambitions, Ambassador Power addressed a much larger audience for the Twelfth Annual Daniel Pearl Memorial Lecture and discussed the relationship between journalism, public opinion, foreign policy and international relations.

Social issues had drawn both her and Daniel Pearl to journalism, and had transported them far from home. At 23, a young Samantha had relocated herself to Yugoslavia and set up shop as a freelance journalist.

From the title to the last sentence, her words not only reported what was happening on the ground, but they were also charged with emotion and conviction. They rang with the challenge of someone looking you in the eyes and asking, “This is what is happening. What are you going to do about it?”

By established standards, past and present, journalism should be factual; moreover, good journalism should be neutral.  Ambassador Power’s articles were not neutral then, but neither are most  journalistic endeavors now. Some people lament the loss of neutrality in journalism, and others question whether it was ever a reality to begin with. Ambassador Power’s articles and her lecture at UCLA, titled “The War on Truth (and what we must do to win it)” suggest that due to the very nature of some topics, journalism cannot be, and more importantly, should not be neutral.

Journalists take risks with their own lives when they travel to unstable and violent regions. The risks they take, however, leave them with both power and responsibility. Modern technology makes it easier for the common man to share his stories today, but in situations with graphic and massive human rights violations, journalists are often in the best position to give people whose rights are being violated and lives taken voices loud enough to be heard internationally and immediately. They can contextualize the local into the global, raise awareness, and shape public opinion and emotions. In the process, they can ultimately provoke and impact foreign policy by rendering issues that may not be of direct geopolitical significance or of concern to national security as part of the intervention and aid agenda.

In this way, journalists hold an immediate power: by raising awareness, they can push governments to stop atrocities in their tracks. They also hold a more long-term power:  the research for academic articles and books, generally esteemed as the reservoirs of knowledge, usually takes place long after events have passed, when witnesses are dead and much evidence has been shoved under the proverbial rug. Often, the only indication of what is happening, what happened last month, last year, or ten years ago is through what journalists produce. Thus, while their stories have the power to compel people and governments to act now, what journalists record in the present also contains the potential to shape the future.

These powers and the attached responsibilities have not changed since Ambassador Power was in Yugoslavia and Daniel Pearl in Pakistan, but there have been significant developments in the field.

As a journalist, Ambassador Power was able to make a living as a freelancer because the print media allowed for the same article to be syndicated across multiple newspapers, magazines, and journals at a profit. Professional journalists today generally cannot make a living as freelancers anymore; everything is online, and consequently, content cannot be repeated. Technological innovations, however,  have also spawned a new breed of “journalists.”  Armed with camera-phones, everyone is a witness; in the world of hashtags and blogs, anyone can be a reporter. They may not have degrees or paychecks, but they have opinions that can reach thousands in minutes. These citizen journalists are also sometimes killed for their actions, just like their professional counterparts.

This new breed seems far removed from the likes of Samantha Power and Daniel Pearl. It should be remembered, however, that while their names and careers are now famous, both the Ambassador and Daniel Pearl began their journeys as ordinary people interested in what was happening around them, and who were determined to share what they saw. The current phenomenon is in essence a decentralization of both power and responsibility: everyone can be aware and everyone can raise awareness. This not only makes it more difficult for dictators to muffle the truth, it also addresses the issue of the media only reporting the truth as they see fit.

As more  people take on the role of informal journalists, events as they are unfolding in a variety of places can be shared through many voices. As multiple perspectives converge to tell each story, the truth behind every incident can be much better recorded for present and future generations. While some writers and the stories they have told may one day become extraordinary, the future lies in the possibility to engender things unextraordinary. The best way to win the war on truth is to render the truth common to tell and common to find.

This overall shift from professional to popular journalism corresponds in an interesting way with Ambassador Power’s transition from a journalist to a politician. Her speech at UCLA did not suggest that she is now any less concerned about the human rights issues that once drove her career as a journalist. On the contrary, her words resonated with the values of someone who still cares deeply about the atrocities  witnessed on the ground, then and now. Her responsibilities have not changed, her target audience has. As a journalist, she focused on public opinion; as a diplomat she focuses on persuading policymakers  in a bureaucracy which in her own words “aggregates the slowness of 193 governments.”

The roundtable discussion preceding the lecture was meant to be an opportunity for budding journalists to receive advice from a former professional. However, the message implicit in the discussion and the speech came from someone who has been watching events unfold from the perspective of both a journalist and a diplomat. Ambassador Power described the events leading up to Daniel Pearl’s murder as a  “catastrophic alchemy of us vs. them.”  This alchemy continues to fuel cycles of retribution taking individual lives, fanning genocides, trampling rights, and burying the truth in the process. While we may not all find ourselves caught in the middle of these violent dialogues, we each have our roles to play. These roles may change over time: Ambassador Power’s responsibility now is to help design an effective response through institutional machinery. Meanwhile, in  a new era in which every individual is armed with the technology to fight, we each share the burden once reserved for professional journalists to bring the truth to  light.