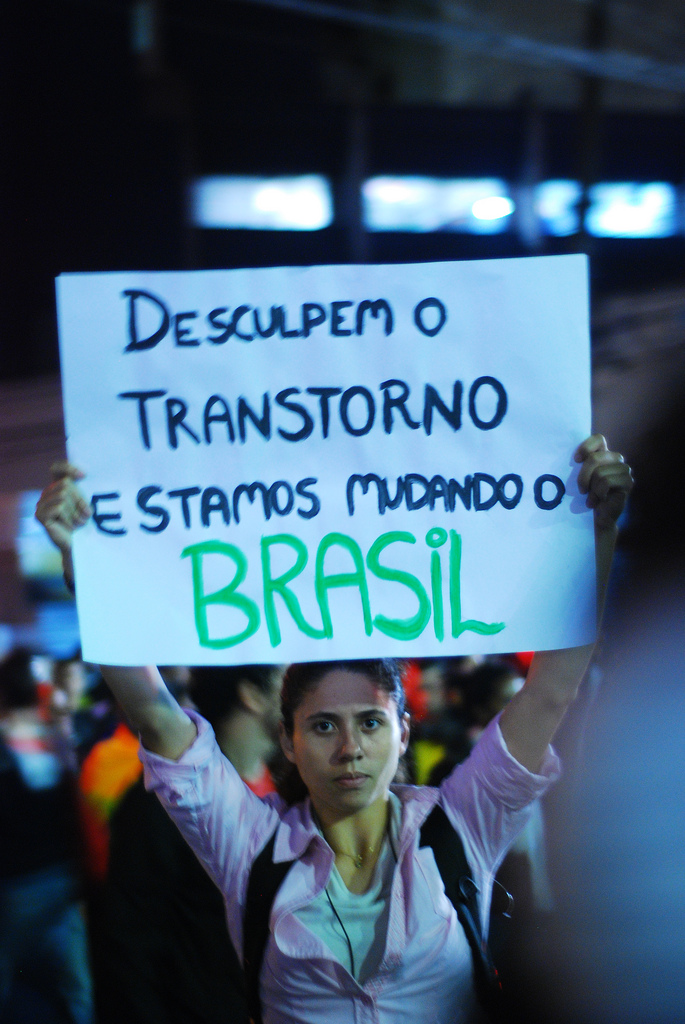 When Brazil won the Confederations Cup final soccer game on Sunday night, June 30th, 2013, the streets of Brazil’s first capital city, Salvador, erupted into a celebration. Fireworks illuminated the sky, and cheers, laughter, and applause resounded through the small bar where over one hundred people were gathered to watch the match on two small televisions.

However, it was not only the win that was cause for celebration. Periodically, during pauses in the game and during halftime, the television coverage cut to the protesters that were marching outside of the stadium. Just as they would if Brazil had scored a goal, the people that were gathered in the bar jumped out of their seats to whoop and cheer in support of the protests. The movement that recently exploded onto the streets of Brazil had become a source of pride.

Soccer has been a part of Brazilian national identity since the 1930 to 1954 military dictatorship used the game to unify the population and construct a strong sense of nationalism. The arrival of the FIFA Confederations Cup in 2013 and World Cup in 2014 seems long overdue for a country that lives and breathes soccer. Most Brazilians are proud to finally have the opportunity to host the games and consider it a testament to Brazil’s place as an emerging world power. Hosting the World Cup and the 2016 Olympic games is an integral part of Brazil’s soft power approach to foreign policy as the state continues to lobby for Security Council reform and equitable IMF representation.

The shining new stadiums that have been constructed in many capital cities are not enough, however, to mask the crumbling infrastructure that surrounds them. Taxpayers have footed the bill for the FIFA preparations, but few expect to see any return on their investment. In fact, the vast majority of Brazilians will not be able to afford to attend a single match in the new structures. And while the construction projects have offered short-term employment to some, the benefits will hardly be long-term. The stadiums are expected to remain vacant for decades to come, and the people that sold tickets and popcorn will return to their previous jobs or go back to being unemployed. Nevertheless, in a matter of several months and several billion dollars, the colossal structures were erected. This was no easy feat for a country where bureaucracy burdens reform and corruption hinders progress, and Brazilians took notice.

One June 13, 2013, frustration over lack of infrastructural improvements turned into fury when several states enacted a bus fare increase. Residents of Sao Paulo that make minimum wage spend an average of 26 percent of their income on public transportation to get to and from work. A group of disgruntled students in Sao Paulo took to the streets, igniting a movement that took the Brazilian government and the world by surprise.

Over the course of the summer, the demonstrations grew to be the largest in Brazilian history, surpassing the 1992 protests that brought about the impeachment of President Collor de Mello. Although the movement lacked central leadership, demonstrations were effectively organized in cities across the country via social media. The majority of the protesters were educated, middle class Brazilians, yet they were fighting for causes that more directly affect the poorest sectors of Brazilian society. Perhaps this is because the height of the protests occurred while university students were on winter break, and wealthier Brazilians could afford to take time off from work to participate in the movement while poorer Brazilians could not. Regardless, Brazilians strategically capitalized on the worldwide media coverage of the FIFA Conferations Cup and the World Cup preparations to amplify their voices and make their demands heard.

The demonstrators that swarmed the streets in June and July had three main demands: the elimination of bus fares for students, more money for healthcare and education, and political reform to reduce governmental corruption. Brazilians bear a tax burden comparable to that of Germany, yet do not see the investment of their money to improving hospitals, schools, or infrastructure. Valéria Figueira, a Brazilian supporter of the movement who lives in Salvador, said, “I am angry every day that I pay first world taxes to live in a third world country. That’s why I admire and support the movement completely. It’s interesting to note that there are so many middle class and upper-middle class youths demanding lower prices for a public transportation system that they don’t even use. This is because they were educated, which is, unfortunately, an opportunity limited to only a select class of our society.” Brazil has the lowest rates of college enrollment in Latin America, and its public education system was ranked 39 out of 40 in an evaluation by the Economist Intelligence Unit last year. Clearly, Brazilians have reason to be upset.

The initial effects of the movement were impressive. President Dilma Rousseff was slow to react at first, and her approval rating plummeted. When she finally held a press conference to address the protesters’ concerns, President Rousseff commended them for exercising their right to demonstrate and promised that her government would work to control inflation and reform healthcare, education, and public transportation. Several states retracted the bus fare increase, and Rousseff’s cabinet met to discuss and implement further reforms, such as increasing the amount of government funds allocated on public transportation and infrastructure. As she prepares to campaign for reelection next year, Rousseff will need to implement much-needed economic reforms and streamline public spending in order to regain the public’s trust.

Although the movement made progress on some of its demands, it has struggled to keep its momentum going since the Conferations Cup has ended. The protests have largely died down and are no longer making national and international headlines. Whether the protesters are satisfied with their gains or they are just waiting until the spotlight returns to Brazil during the 2014 World Cup is yet to be seen. Whatever the outcome, the protesters’ strategic capitalization on a moment in history when the whole world was watching Brazil was powerful. Brazilians effectively held the games hostage in exchange for social reform, setting a precedent for future World Cup host countries and sending a powerful message about the balance between international soft power interests and national development.

The Brazilian flag was raised after Brazil won the Confederations Cup final game, and the people gathered in the small bar stood to sing the national anthem together. With tears glistening in many of their eyes, they sang the chorus with a glimmer of hope for the future of their country:

Fair and strong, brave and colossal,

Thy future mirrors this thy greatness.

Michelle Sinness is a first year MA student in Latin American Studies at UCLA, specializing in Brazil. She spent the summer in Salvador, Brazil under a Foreign Language and Area Studies Fellowship.