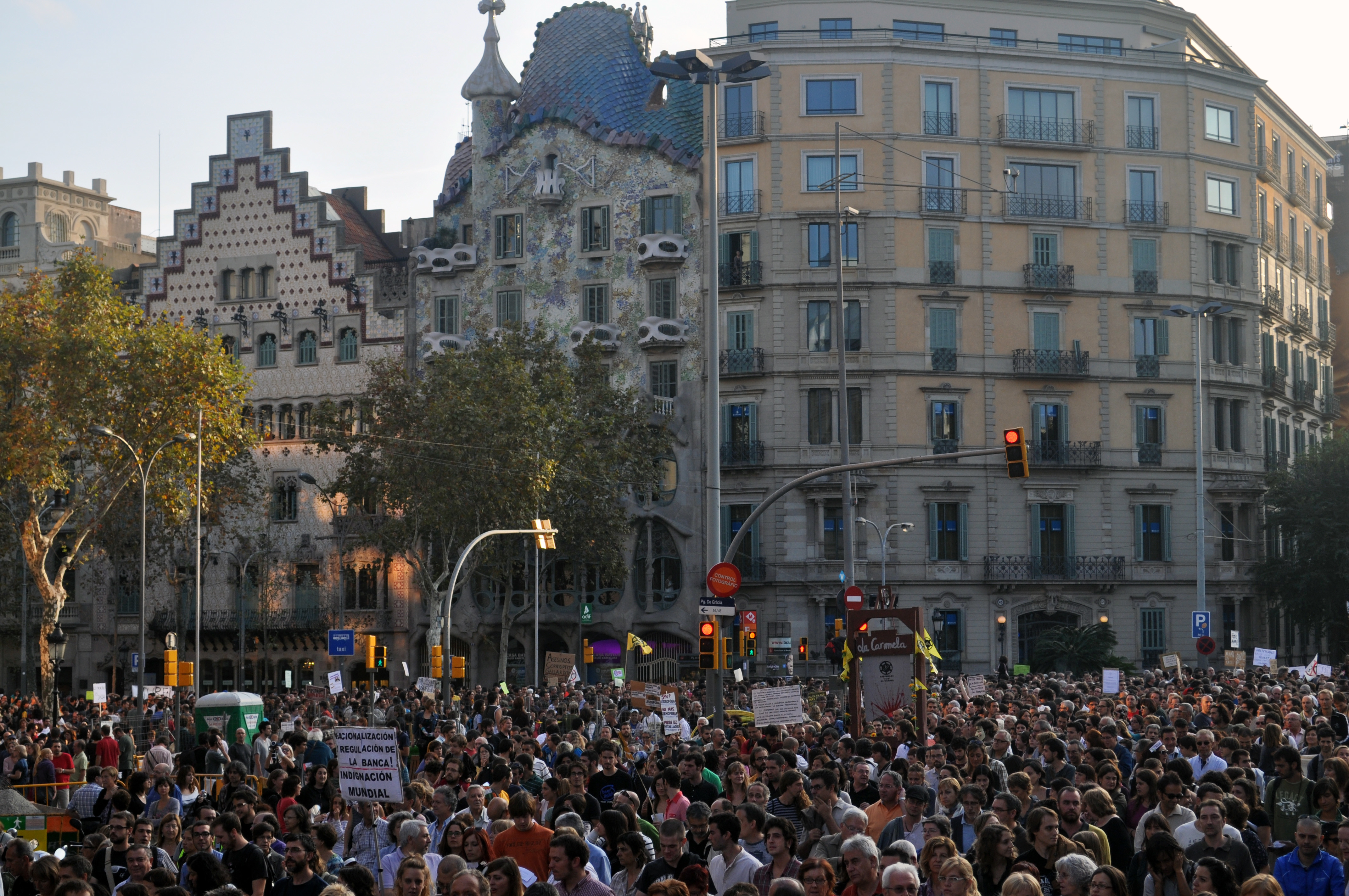 Welcome to Spain, home of siestas, fiesta, sangria and paella; please enjoy our nice weather and good food. Why not? Walking throughout the streets of Madrid they appear as lively places full of people and energy. It is awfully surprising how non-obvious the current situation is. Demonstrations, strikes, and riots have been happening every week somewhere within the country, and have been for quite some time. The current state of disbelief, of no hope in our democracy, these are punctual things, a punctual and self-contained discomfort, and one that an outsider may never notice. One could say that it all started with the 2011 Spanish protests of Spain’s economic crisis, also known as the 15M movement.

Throughout 2011, it became obvious that we were living in some sort of police state. If we understand a police state as a place where the law is used to the extent that it becomes repressive – control through fear of the forces of the law – that it limits the freedoms inherited from the transition to the democracy, then that was the state of 2011.

One must come to the understanding that demonstrations in Spain are followed by hundreds of thousands of protesters, by millions in some cities. With only 45 million inhabitants, reaching a million in any city’s demonstration is not a small achievement. The average age in a given demonstration falls around 40 years of age, including families with children or elders. In other words, the demonstrators are not some random punks but are representative of the average population who are simply saying, “We’ve had enough.” Enough.

And by enough, some people refer to the fallacy, the open insult to democracy. The right-wing “People’s Party,” now in the government, is literally doing the opposite of what its agenda campaigned on and promised (protecting or lowering taxes, preserving social aid, etc. during elections – what people voted for. One could take the current state of affairs, fact check each point of what was promised and what has happened, and it literally comes out as the opposite.

By enough, some others refer to the statistics. As Sabino Cuadra, a member of the Congress stated during one of its sessions, between 1994 and 2007, or the “high development” years in Spain, real salaries rose by only 1.9% (without considering inflation), the average pension rose by only 16.3% and unemployment benefits decreased by 16%. Meanwhile, the gross benefit of major companies rose to 50%, shares and other activities rose to 129% and real estate property to 175%. Therefore, the real growth wasn’t applied to the average population. And that money left the country, which takes us to the next point.

By enough, still others may refer to taxes and financial cuts. Spain is the leader in Europe in tax evasion, doubling the average. According to the Association of Technicians of the Spanish Treasury Department, big companies and wealthy families have taken advantage of these loopholes making up 72% of tax evasion, while 80% of tax inspection disproportionately focuses on workers, small companies, and freelancers. The austerity plans affect the general population, elderly, public health, education, VAT, funds for research and small business, all while new laws are being made to protect big wealth.

Enough of it. Enough of the more than 20% unemployment (50% of unemployment for youth), of having a bizarre mockery of what politics and democracy should be, of being ashamed of how it is all being dealt with, of being the average citizen paying for massive bank bankruptcies and massive private investments. The average citizens of Spain have had enough.

Can the big and wealthy continue to wonder why Spain is on the streets? Can the government continue its misrepresentations?

But now, the police state has disappeared. We have reached a point that dates back to September 25th in Madrid, where a subtle change was too obvious to be ignored. Several hundreds of thousands (once again, families and elders joined together) surrounded the Congress with beautiful and neat signs. “No” was the only message, some even with a “Not Like That” as a slogan. Clean and clear.

After 9:30pm, officially 1,800 anti-riots took place (and civilian videos show how hundreds of others were infiltrated between the demonstrators), with their armored vans and rubber bullets, and started shooting—in the streets, inside cafes and bars, in corners. Apart from the exponential increase of police violence, what changed this time was that after everything was “dispersed,” the police kept going for hours. As an example, the images of how they arrived hours after to Atocha (the biggest station in Madrid), which is nearly a mile away, are horrific. The police started randomly shooting rubber bullets and beating pedestrians and passengers as they randomly arrested citizens, all the while breaking journalists’ cameras. Situations like these relate more to a militarized state. The Government does not need to use the law to expand fear – they use force.

A friend of mine told me “I will keep going, it’s my right to demonstrate. Before, I was scared to end up in jail, to wake up in prison for some months… Now sometimes I literally fear for my life.”

But still, welcome to Spain. Enjoy our nice fiestas, sangrias and paellas – because you won’t see the rest; the sweet and sour mixture between desperation and anger is not obvious enough yet, in the day by day, on the streets.