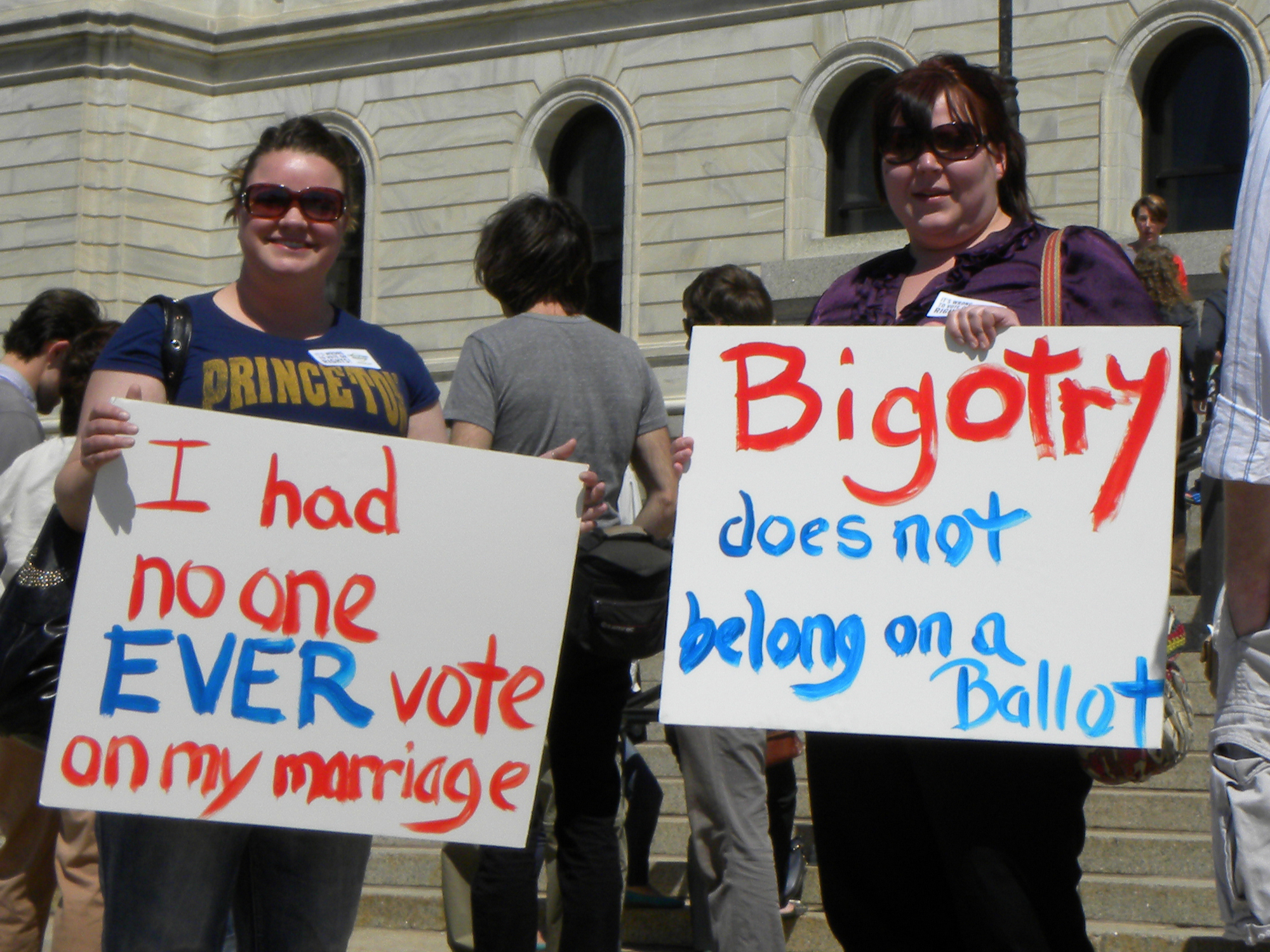 The institution of marriage in most countries around the world refers, by default, to marriage between a man and a woman. Marriage equality – the right of two persons to marry regardless of gender and sex, often equated with “same sex marriage” – is only fully legalised in 26 countries to date. In many countries, the idea of changing the laws to allow for marriage equality can be a contentious and often partisan issue. Marriage equality is inseparable from the rights of LGBTQ+ populations, therefore a largely classified as a liberal cause invoking debates on religious freedom as well as civil rights. Two countries so far, Ireland and Australia, have referred the matter directly to their citizens through a popular vote; that is, a vote which was extended to each country’s entire voting population. Ireland’s 2015 Referendum and Australia’s 2017 Postal Vote both returned majority “yes” votes, resulting in the passing of legislature that allows any two people to marry regardless of gender. Yet together, Ireland and Australia have set a dangerous precedent where a majority population was given the right to decide on equal access to human rights for an underprivileged group.

Despite being a near-universal practice, marriage is not a universal institution. Each country has its own definition of what constitutes a valid marriage under the law, canonised through laws, acts, even constitutions. Commonly, because dominant historical and cultural narratives see marriage as being between a man and a woman, it is accepted as implicit that this is also the legal definition. A country wishing to extend the right to marry to their LGBTQ+ population will often have to go through a process of legitimising it through amending existing legal texts. This is regardless of whether or not those texts explicitly forbade same-sex marriage in the first place. In countries such as the US, the sovereignty of governing bodies allowed them to determine the institution of marriage without involving the population – the Supreme Court exercised this to outlaw bans on same-sex marriage in a ruling in 2015, allowing for marriage equality to exist in all states of the US. Ireland and Australia exercised direct democracy instead.

Pre-polling in both Ireland and Australia had already indicated that the majority of those countries were overwhelmingly in favour of marriage equality. Yet the issue was forced into a popular vote in Ireland as a matter of judicial legality. Ireland has an extensive Irish-English constitution. Marriage is defined under Article 41, which was interpreted to implicitly restrict that marriage be between a man and a woman. That is, the Constitution never explicitly forbade same-sex marriage, but did not endorse it either. In order to insert the proposed 34th Amendment to the Irish Constitution which would definitively allow for marriage to be contracted “by two persons without distinction as to their sex”, there was a process stipulated by the Irish Constitution. After a bill which proposes to amend the Constitution passes parliament, it is mandatory to then seek the approval of the majority of all Irish electors (those eligible to vote in general elections) in a Constitutional Referendum. Hence overall, since the power to grant marriage equality in Ireland lay in the Irish Constitution, and a Constitutional Referendum is a necessary step in installing a Constitutional Amendment, a popular vote in Ireland was necessary. The Irish Referendum, held on the 22nd of May 2015, had a turnout of 60.5% and returned results of 62% yes and 38% no. Following its passing, the government legalised marriage equality on the 16th of November that year.

The Australian popular vote often claimed the Irish vote as precedent, but there is in fact a key distinction: there was no legal necessity for a vote in Australia. Unlike Ireland, the Australian Constitution only mentions marriage where it decrees that marriage and divorce came under the legislative power of the Australian Parliament. The Australian parliament holds discretionary powers on all matters relating to the institution of marriage in Australia, and they chose to define and parameterise marriage under the Marriage Act of 1961. The government is not obligated to seek approval directly from the people when changing Acts. Yet Australia opted for a vote because of a promise made by the Australian Liberal Party in the election of 2016 that they would refer the question of marriage equality directly to the voters (in Australia, the Liberal party is conservative and the Labor Party is liberal, though both are more centrist and less polarised than the conservative-liberal divide in the US). Hence despite having the power to circumvent this divisive popular vote, the Australian parliament essentially arbitrarily decided to conduct a survey on an issue entirely within their power of legislation, based on upholding an election-time promise.

The word “survey” is the correct one to use as a second key distinction should be made between the Australian and Irish votes: the Irish Referendum was binding, the Australian postal vote was not. The Irish Constitution states that the results of a Constitutional Referendum must be honoured. The Irish President is still required to sign the bill into law as a formality, but since the Irish public voted yes to changing the Constitution, the parliament had no power to overturn the result. However, since the Australian parliament’s legislative powers cover marriage, they could have either refused to pass the bill, or passed it anyway even if the postal vote had resulted in a “no” vote. Indeed, multiple members of parliament declined to vote in accordance with the results returned by their electorate, and a small number abstained from voting rather than vote with their electorate. If politicians who opposed marriage equality had simply outnumbered those who were for it, the conscience vote for the eventual bill could have sunk marriage equality regardless of the voting result.

The right to marriage and family is Article 16 on the UN’s Universal Declaration of Human Rights. It specifies that “men and women of full age, without any limitation due to race, nationality, or religion, have the right to marry and to found a family”. (NB: while the singular form “a man and a woman” would decree that marriage be between men and women only, the plural form of “men and women” remains open to be two men, or two women, etc). It further stipulates that “the family is the natural and fundamental group unit of society and is entitled to protection by society and the State”. That is, governments ought to consider that discrimination in the institution of marriage based on gender is not simply a question of politics or civil liberties, but free and equal access to human rights. No other human right is, by default, curtailed by the gender of those under its protection. There is no reason, despite historical conventions, that marriage should be.

Hence Australia’s postal vote foregrounds a question which is understandable, or at least explainable in the case of Ireland – the question of why a government is allowing an entire country to vote on whether or not a historically underprivileged group can exercise their full and equal human rights. It is a dangerous precedent, especially considering that a former administration of Australian parliament had been responsible for prohibiting marriage equality in the first place. The Marriage Legislation Amendment Bill in 2004 was the first to explicitly define marriage in Australia as the “union of a man and a woman”, and was passed by policy makers alone without a popular vote. Clearly, there was precedent for parliament to alter the institution of marriage in Australia. In polling its citizens, the government asked citizens to grant a minority group rights that politicians alone had taken away. It was the government which denied its citizens access to a human right, and yet they put the responsibility on the country as a whole to restore it.

In a way, the affirmative outcome of both countries’ postal votes is ominous; this is an issue which extends beyond marriage equality or the LGBTQ+ population. It is a question of the role of government in upholding universal human rights. Underprivileged populations have a long history of appealing to the government for their rights. For example, the 19th Amendment of the US Constitution handed down by the Supreme Court mandated that states not withhold voting rights based on gender, giving (initially only white) women the vote. Australia and Ireland, intentionally or not, have set a precedent in the opposite direction. Ruling bodies now have a clear and positive precede for devolving the question of human rights to a majority population. They can now cite Ireland and Australia as examples where the will of the people was respected with the ostensible faith that history moves in the right direction. This can now be applied to many partisan political issues of the day which have an underlying foundation in human rights issues: treatment of refugees and undocumented immigrants can be linked to Article 15, the right to a nationality. Freedom of speech and buzzwords such as “politically correct” is relatable to Article 19, the right to freedom of opinion and expression. Debate on abortions and contraception tie back to Article 3, the right to life, liberty, and security of person or Article 6, the right to recognition as a person under the law.

Now the issue is not only in the intangible, hypothetical future – through putting the question of marriage equality to a vote involving not just politicians but each individual in the country, the pressure to pass or deny also falls to each individual in the country. A key and immediate issue presents itself: marginalised groups, instead of lobbying politicians who have civil and legal obligations to them as constituents, are now forced to appeal for their equal rights from every single voter. These are voters who have no constraints on how they treat political and civil issues apart from their personal beliefs. The onus now falls on individuals to prove their worthiness to equal treatment under the law. Where human rights are concerned, equal treatment should be something that is protected by governing powers and not begged for from the sum of individual opinion.

Overall, Ireland and Australia have set a positive precedent, but a dangerous one nonetheless. All citizens of Ireland and Australia now have the right to freely marry, yet this right had to be earned by convincing the majority of a voting population that a marginalised group was worthy of equal treatment. This precedent should be approached with great caution. The victories of Brexit in the UK and President Trump in the US were outcomes which shocked the world – in a world of ever increasing political partisanship, voting is increasingly turbulent and the lines between conservative and liberal are growing wider. It is a dangerous precedent to leave to sheer numbers the human rights of minorities.