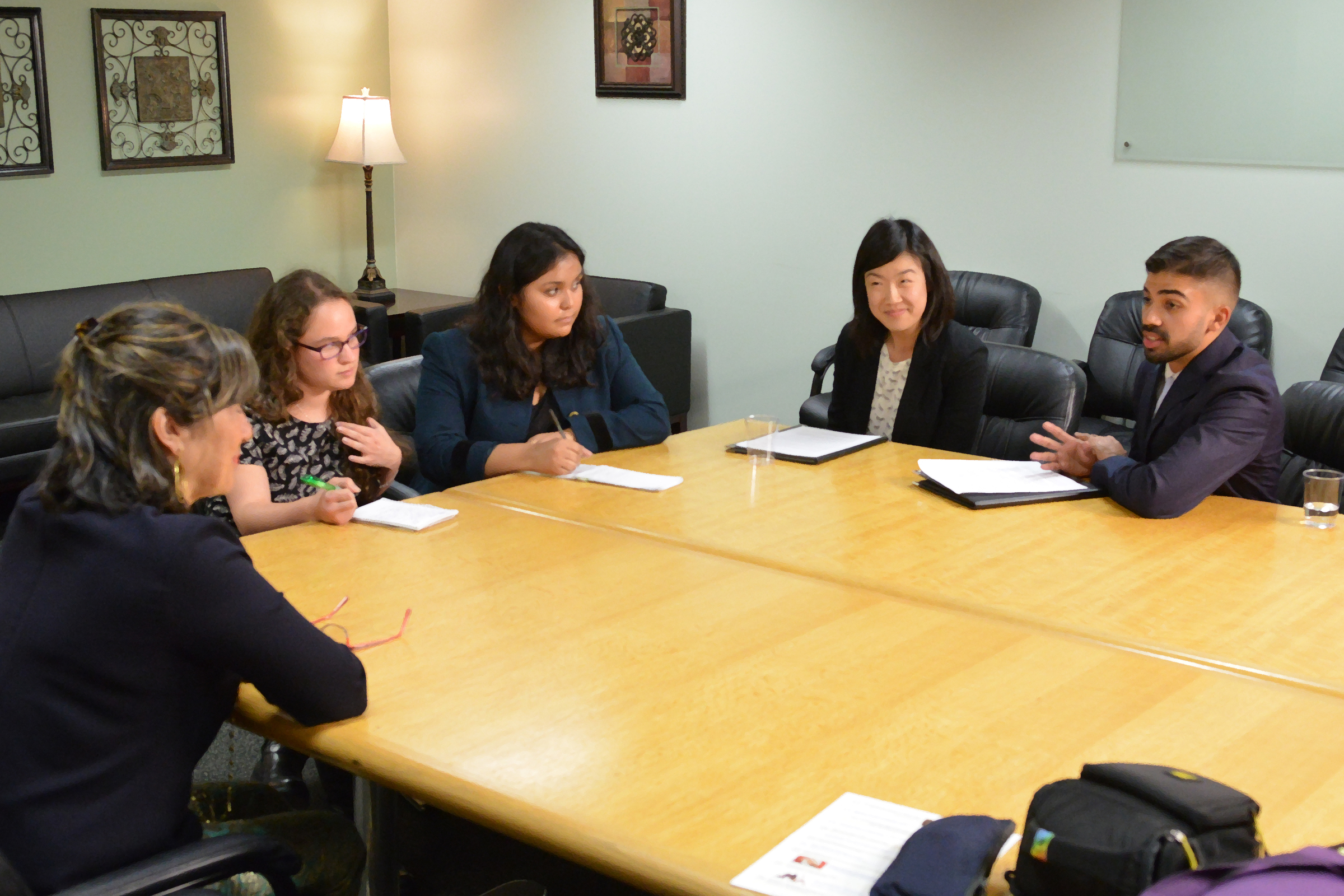 On April 13, 2016, CNN’s chief international correspondent and award-winning journalist Christiane Amanpour spoke at UCLA’s Korn Convocation Hall for the Daniel Pearl Memorial Lecture Series. The series was created to commemorate the life and work of Daniel Pearl, a reporter for the Wall Street Journal who was kidnapped and brutally murdered by Pakistani militants in 2002. Ms. Amanpour, who sits on the board of the Daniel Pearl Foundation, has covered breaking news from across the globe for over 20 years and is known for her exclusive and hard-hitting interviews with world leaders, including former Libyan leader Moammar Gadhafi. Both during the lecture and in an interview with The Generation Editors Arturo Siguenza and Susan Oh, Ms. Amanpour spoke about the power and importance of journalism as a civic duty and the changing environment of journalism today.

Amanpour began by addressing how important it is for Americans to be connected to the world. 9/11, she recounted, was a game changer for Americans. It impacted not only our response to terrorism, but the manner in which we absorb and emit news in the international sphere.

9/11 is the modern day equivalent of Pearl Harbor and all of that which made the world and brought the world home for Americans in a way that hasn’t been true in the previous generation or so. I have always believed that 9/11 or no 9/11, the world is a massively important place that Americans particularly cannot get along with not knowing about.

9/11 forced America to be engaged and conscious of the world outside our borders, and the need for this awareness has grown exponentially. “It’s a two way street, and there’s no choice… other than to be engaged,” she argued, and it is foreign correspondents, like Daniel Pearl and Amanpour herself, that serve as conduits for this interdependent relationship. It is journalists who “have dedicated their lives to being your eyes and ears around the world, and actually sacrificed their lives to make that happen.” This is where the power of journalists stands firmly. Journalists and foreign correspondents respond to a calling to connect the world we live in by telling the stories of those desperate to be heard. These stories cross borders, dissect political views, and unite people through the words and images that journalists proliferate.

Born in Iran, Amanpour responded to the call. She experienced firsthand the toppling effects of the Islamic Revolution on her friends, family and country, fueling her passion for journalism.

So I came to the United States, with the idea of being a journalist, because the revolution in Iran taught me, bizarrely, to be interested. It fired my imagination. It fired my curiosity, born of a very personal life experience. I wanted to understand what was going on in the world that could all of a sudden turn my life, and my friends, and my parents, upside down.

From then on, she came to push the boundaries of journalism, covering stories from Bosnia to Iraq, from Rwanda to Somalia, from Afghanistan to Turkey, and far more.

Her bold and courageous reporting style has set her apart from her peers, as she not only tells a story, but takes a stance and calls for action from the global community. She recounted her coverage of the Bosnian War in the early ‘90s explaining how she and her colleagues used their platform as journalists to push for world leaders to respond to the atrocities they witnessed, especially the massacre in Srebrenica.

I think the fact that we were able to do that in Bosnia made a difference and eventually brought an end to the war, because our reporting made it impossible, eventually, for Western democracies to turn away.

Since then, she has made it her mission to “take the torch of light and truth and shine it in all the dark corners,” and bring justice to places where she finds impunity. “If that makes me an activist,” she added, “then yes, I am an activist.”

In her years as a journalist, she reported directly from battlefields, experiencing the dangers of her profession firsthand. However, as she looked back, Ms. Amanpour reflected on how much has changed. She noted that while journalists have historically been caught in the crossfire of war and conflict, it was during the Bosnian War that journalists started to be deliberately attacked. “[Daniel Pearl] was perhaps the first of the brutally murdered journalists in our generation…Today, and especially since 9/11, the leading cause of death for journalists is murder…people want to shut us up.” The increased risks of death, kidnapping and imprisonment for journalists today makes it incredibly difficult to report from war-torn places like Syria, which has led to underreporting of the war. She believes the lack of information from Syria, coupled with the West’s reluctance to intervene, has allowed ISIS to grow, terrorism to flourish and has resulted in a refugee crisis in Europe–an issue that Western countries are scrambling to mitigate. This is precisely why she argues that the global community must be engaged and invested in what is going on around the world.

Amanpour reminded us that journalists hold the ability of forcing the world and its leaders to take notice,  “whether it’s your school leader, whether it’s community leaders, whether it’s the mayor’s office, the governor’s office, the president, Congress, dictators around the world, whoever it might be, the more we shine the light on these stories, the more difficult it is for impunity to take hold.”

In addition to the concerns she has about the increased dangers of reporting from the field, Amanpour is also troubled by how journalism is consumed today. In today’s age of smartphones, social media and the barrage of viral content, she is concerned that journalism is losing its ability to garner focused attention to pressing issues. With more people self-selecting the news they want to read and superficially lending attention to stories via “likes”, she feels that society is losing its collective consciousness, or the “critical mass that [we] need to affect any kind of reaction to what is happening”.  She fears that this “flash in the pan” reporting, makes everything seem important, while at the same time, makes nothing important at all. We came together to #BringBackOurGirls in Nigeria and #JeSuisCharlie after the Paris attacks, but she asks, “What now?” She admits that journalists are still trying to figure out “how to make [technology] work” for them and, in her case, how to engage activism in today’s climate of fleeting attention.

Today, journalists walk a  fine line between performing a civic duty to the world, and putting their lives at risk in the face of leaders and organizations that deem us enemies. From Syria to Egypt, from Russia to Turkey, from Mexico to the Philippines, leaders have aimed to punish journalists not only physically, but also by voiding freedom of expression.

Amanpour has dedicated significant time to questioning those who seek to silence and suppress journalism, sitting face-to-face with leaders like Turkish President Tayyip Erdogan and bravely pushing them for answers. However, she recognizes the evolving nature and danger journalism has taken on. While she faces increased challenges of spreading truth to the masses and increased danger in the field, she remains committed to her religion of truth–the same religion of truth that Daniel Pearl risked his life to uphold–to be the “eyes and ears” for all of us at home.
A link to the full audio of the interview can be found here.