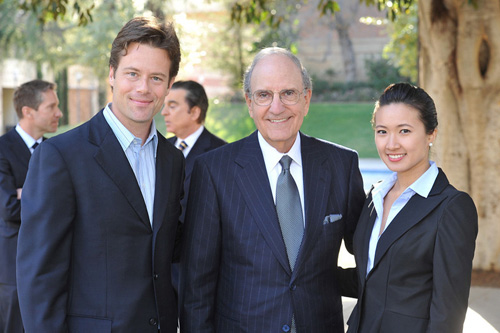 The Generation co-editors, Jennifer Ching and Brad Rowe, caught up with Senator George Mitchell on March 1, 2012 during his visit to UCLA’s Burkle Center for International Relations to share his experience and thoughts on the art of negotiation and peacemaking.

Mitchell is a veteran of several administrations and famously served as the key negotiator during the peace talks in Northern Ireland that led to the Good Friday peace accord. From 2009-2011 he served as President Barack Obama’s Special Envoy to the Middle East to negotiate an agreement between Israel and the Palestinian territories. Mitchell also served as U.S. Senator from Maine from 1980-1995.

Daniel Melling, an undergraduate intern at the Burkle Center, had this to say about the special day:

Before taking the lectern to deliver the Bernard Brodie Distinguished Lecture, international problem-solver and Democratic legislator Sen. George Mitchell met at Schoenberg Hall with a small group of Burkle Center interns and graduate students to answer questions about his career and the prospects for peace in the Middle East. With the Burkle Center’s Alexandra Lieben and UCLA Vice Provost Judi Smith observing, Sen. Mitchell took the head of a seated circle to begin the discussion.

Answering a question about public service, Sen. Mitchell encouraged students to use their careers to embrace a cause larger than themselves. As the conversation progressed, Sen. Mitchell warned of the danger overpopulation could pose to governments. Sen. Mitchell fielded a variety of questions from how negotiations can legitimize odious factions to what role ambiguous terms can play in peace accords. When asked about how negotiating parties use religion to further their cause, Sen. Mitchell quoted himself as a senator reprimanding Col. Oliver North in the Iran-Contra hearings: “Although he is frequently asked to do so, God does not take sides in American politics.” With the time elapsed and the main lecture approaching, Sen. Mitchell rose to leave, but not before a group photograph to remember a conversation with one of the United States’ foremost statesmen.

Brad Rowe is a Master of Public Policy graduate student at the UCLA Luskin School of Public Affairs. He is working toward influencing drug and crime policies in the United States and abroad.

Jennifer Ching is a senior at UCLA, double majoring in Communication Studies and Political Science. After graduating, Jennifer plans to pursue a career either in news media, features journalism, or international diplomacy.

Daniel Melling is a senior history major at UCLA. At the Burkle Center, Daniel has revised historical archives and planned for upcoming conferences.