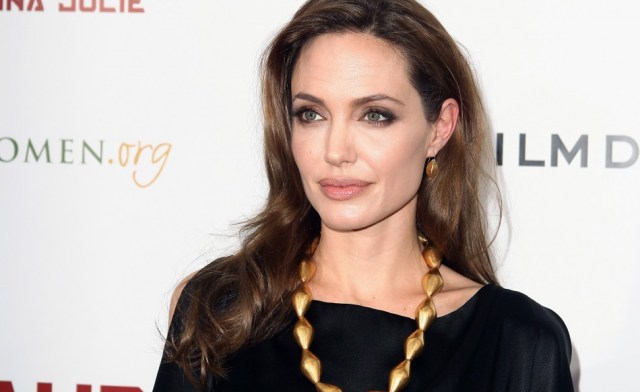 The Generation editors Shadee Ashtari and Reza Hessabi spent some time with Angelina Jolie on the red carpet premiere of her directorial and screenwriting debut, In the Land of Blood and Honey. In this article the duo outline their reactions to the interviews they conducted with the cast and crew of the film.

Backdrop: In the Land of Blood and Honey depicts a love story between a Muslim Bosniak woman and a Serbian soldier set against the backdrop of the Bosnian War. The film portrays the genocide and sexual violence committed against Bosniak Muslims through a romantic narrative that turns just as violent and cold as the war itself.

Part I: The Danger of Vague Rhetoric — Enabling Dialogue without Decisiveness

As I stood along the red carpet awaiting Angelina Jolie, I couldn’t help but feel nervous and intimidated–intimated mostly because I was wedged directly between CNN and The Associated Press, and indirectly between 40 other reporters and photographers from major news and entertainment outlets. Finally, Jolie began to slowly make her way down the carpet, rotating, pausing, and smiling calmly, as if 30 photographers weren’t screaming ridiculous things to get her attention. I wondered if she would even have time to take questions from a couple 20-year-old students. As it turns out, she did.

Me: Hi, I’m from the Burkle Center at UCLA, my name is Shadee.

Angelina: Hi! Nice to meet you, thank you for supporting us tonight!

Me: Very nice to meet you–of course, of course. My question is: You have engaged in humanitarian works in over 20 countries, so you’ve seen much of the great pains that you’ve talked about in this war for this movie; you’ve seen it going on today in regions such as Darfur. What lessons have you learned from making the movie that we can apply to today’s great pains to keep today’s victims from being forgotten?

Angelina:  […] I know a big part of it is how we educate ourselves and our children, the next generation, and teach them, truly teach them, about what happened. And the other thing is,[…] the most important thing is dialogue […] in order to have this dialogue is what brings about change and pushes for new laws and pushes for us to intervene next time. So the cast agreeing to come together from all sides of the conflict […] and we decided that if everyone could agree to come together to work on a project on this very difficult time in their history then that would be the beginning of a message of unity […] so we hope that this cast is symbolic and […] when they go home, they’ll spread that message and it will be the beginning of a discussion […] So we hope to inspire this dialogue and push for change.

What is she really saying?

I must admit, it was difficult to truly analyze what she was saying in the moment. My hands were shaking from the cold, I couldn’t figure out if she had noticed I was staring directly in between her eyes, and not to mention she was mesmerizingly beautiful. Half of me wasn’t even listening; I was just watching (or probably just dumbly smiling). But from what I immediately gathered, she was genuine and really very charming. Her hands moved passionately as she emphasized certain points, and she gave me a long two-part answer instead of an abruptly scripted response. As photographers screamed her name and yelled absurd attention-seeking comments, she remained focused and on point — she cared about what she was saying. She has, after all, visited over 20 countries for humanitarian work, helped refugees through countless field missions, established several philanthrpic organizations, donated millions of dollars to charity, and met with members of Congress at least 20 times between 2003 and 2006 to push for bills aiding refugees and vulnerable children in the Third World and the United States. Yet, despite her hands-on experience with today’s greatest human tragedies, as I listened to her answer later on, I was a bit disappointed.

Prior to interviewing her on the red carpet, I had spent a few hours researching her movie and watching her interviews promoting the film. In multiple interviews talking about the movie, she explained that one of the main goals of the film is to keep the victims of the Bosnian War, and all they suffered, from being forgotten. So my question addresses that mission: after learning about the Bosnian genocide through directing and writing the film, what did she see as the solution to helping today’s victims of genocide?

Her answer:  education and dialogue.

Her response essentially elaborates on these two main points. She begins by explaining that educating our children is one solution. Granted, she is talking about an in-depth, well-rounded, and multi-perspective education, one that teaches “the next generation,” about the atrocities that occurred and what people did and didn’t do to help. Yet, throughout much of World War II and the Holocaust, the world knew exactly what was going on. Many were educated on the mass murders and brutalities of the Nazi Regime. After the war, President Jimmy Carter said, “Out of our memory…of the Holocaust we must forge an unshakeable oath with all civilized people that never again will the world stand silent, never again will the world…fail to act in time to prevent this terrible crime of genocide…” The international community pledged: “Never again!” Books were written, museums and documentaries created, and the world was educated. But then there was Cambodia. Bosnia. Rwanda. And now, Sudan.

Education alone has not prevented any of these genocides. It is of course a necessary step; future generations must analyze and learn the histories of human tragedies before being able to prevent new ones, but it alone has not had enough force to garner tangible change. Awareness, even among an entire country, is not enough to force intervention—as seen in the war crimes committed generation after generation. Education is a valid approach, but an incomplete one—it is only the beginning, and without applying education to tangible policies, it is powerless.

Angelina then leads into her next solution: dialogue. She explains that dialogue is “what pushes for change,” and goes on to describe how uniting members of the cast who are from opposite sides of the conflict sends a message of unity that the cast members will hopefully go home and spread. But is it enough? I understand her message, and I agree — dialogue is absolutely necessary. It is one way of inspiring legislation is for a national discussion on vital issues. Without the discussion, the issue, and thus the solution do not exist. Dialogue in a sense then is given, and provides no real answers to the victims of today. It is yet another introductory step that lacks the force and precision of a more decisive and politically powerful response. Angelina Jolie has clearly shown that she cares; she has not been just another million dollar donator from across the world. She has devoted much of her life and energy to refugees and humanitarian aid. Her power lies not only in her celebrity fame, but in her genuine track record for hands-on aid. As an international figure for humanitarian work, with access to the mass power of the media, “education” and “dialogue” are just too vague.

What should she say?

“Darfurians have heard the outcry of the American people and the world community who have taken on the responsibility of speaking out for those that are unable to speak for themselves. What they are still waiting for, though, is a tangible solution for the world’s greatest ongoing humanitarian crisis.” – Fatema Haroun, Darfurian activist.

The danger in vague, broad answers like “education” and “dialogue,” is that they are accurate and necessary, which allows the listener to logically nod and agree, but meaningless, since they don’t directly pressure anyone or anything for change. They are merely larger concepts, a philosophical basis, without the backbone of a specific strategy. The answer is pointed rhetoric, a researched response that must be repeated until taken hold of. Take my question to her about Darfur, for example. The answer to today’s victims, to the systematic displacement, rape, mutilation, and murder of the Sudanese, to the 5,000 that die every month at the hand of their government-supported militia, is this:

Pressure on policy. Educating the population has not given people the power to help end the pain today’s victims are suffering. Discussion, open dialogue, yes they are essential—but we are past that phase. Using vague rhetoric to paint a positive yet powerless strategy is not enough. It is time for America’s powerful people to push policy, not philosophy.

Part II: The Best They Can Do

I was dressed in a full suit – not nearly as flashy as the E! Online reporter, but still a tad gaudier than the relaxed attire of journalists from several other news outlets. The lot of us patiently awaited the arrival of Angelina Jolie and her cohort of actors and producers behind the gum-infested fence that separated the rabid media from the celebrities. It was the premiere of her newest film In the Land of Blood and Honey, a careening tale of violence, romance and savagery during the Bosnian War of the 1990s.

Tasked with interviewing Jolie, my fellow editor and I were also granted interviews with actors and actresses from the film. This included the main actress, Zana Marjanovic, and the grisly antagonist, Rade Serbedzjia. Three short interviews followed one another before the grand finale with writer/director/actress Angelina Jolie. We asked each actor and actress the same question: “How do you wish to see this film play out on the international stage?” Or rather, in a more concise form:  “What do you hope people will learn from this film?”

My fellow editor, Shadee Ashtari, can comment on the disappointment inherent in the answer, “Education and dialogue are most important.” What I’d like to focus on is the inability for a film to do much more than just that:  educate and encourage dialogue.

Angelina Jolie is not a scion of political, geopolitical, international, or social reform.  She can never be such a symbol. This is  fine because there are enough men and women vying for the burden. But what she can do is make films. Using that power, that inherent resource in her possession, she crafted a film that violently and acutely depicts the barbarism of the war in Bosnia. That is all the actors and actresses and she she can do. The answer, “I hope for dialogue to open up about the issue” from star Zana Marjanovic, or “I hope people learn about Bosnia and what happened” from Rade Serbedzjia, is a delicate admission of fault in the medium. Films and movies are cultural commodities, not concrete policies or resolutions. They can only illustrate, not reach out of the screen and force humans to reconcile our differences.

This then leads to the thought that Jolie’s next venture, possibly a film about Afghanistan, could serve the same banal purpose. Education and dialogue, two vague intangibles incapable of intimidating any of the infamous villains of the world, would be encouraged by the one percent. But while on-the-ground problems can only be solved by on-the-ground solutions, a movie yelling at the audience and forcing them to confront the horror of another person’s daily life isn’t so bad.  In a way it’s noble. It’s a grasping attempt at contributing to humanity’s oft-invisible repertoire of good deeds.

In this vein, Jolie should be applauded both for the film and her vague answers. The actors and actresses too should be commended for trying to do what they can to help the situation from their niche. This does not absolve other organizations of their duty to provide real answers to today’s tough questions, as outlined by my colleague, but it does give heart to those wishing somebody, somewhere would do something, anything for the suffering masses.