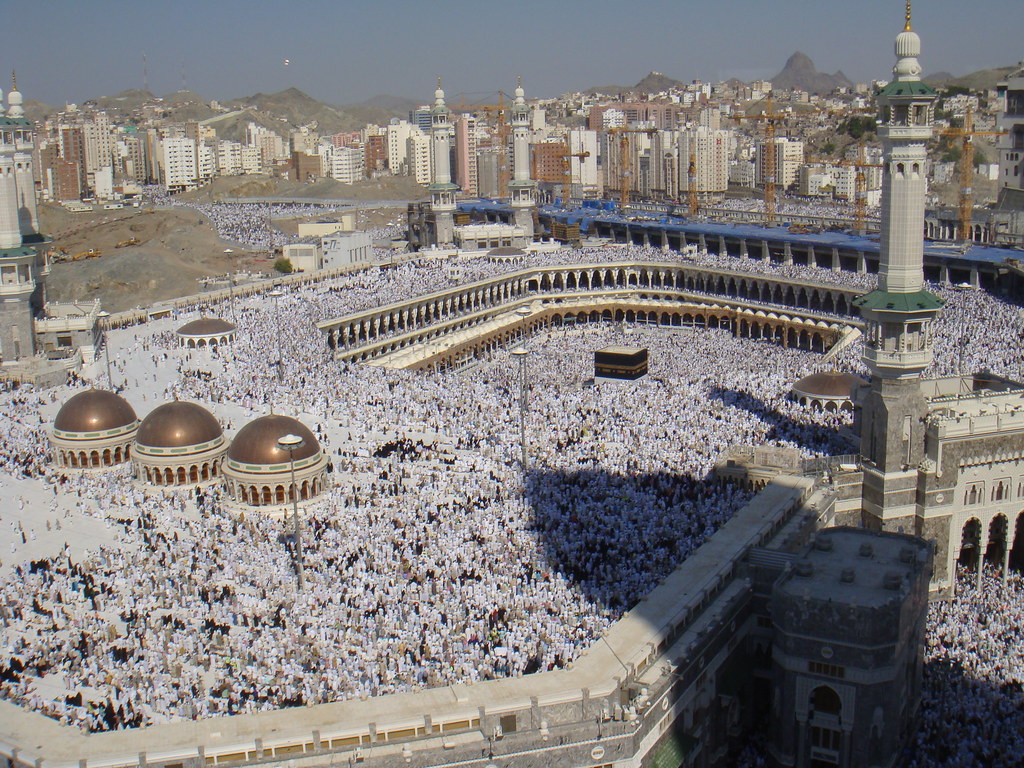 This article was published as part of our Spring 2019 print edition, the entirety of which may be found here.

One of the world’s tallest buildings, The Makkah Royal Clock Tower, looms over the Kaaba and the Masjid al-Haram Mosque, Islam’s holiest site. The Clock Tower boasts a luxury Fairmont Hotel, which offers rooms with views of the Kaaba for up to $4500 a night, along with high end shopping and restaurants. However pilgrims that cannot afford the growing number of luxury hotels sleep on the street outside, illuminated by the fluorescent lights of an opulence they may never experience. The commodification and capitalization of Mecca draws a stark contrast to the rites of the Hajj that emphasize equality and humility. Such an inherent disparity between purpose and practice has sparked a global conversation not only about the meaning of the Hajj, but Saudi Arabia’s fitness to oversee it.

The Hajj is a five day ritualistic pilgrimage to Mecca required of all Muslims who are physically and financially able at least once in their lives. Mecca is within the political jurisdiction of the Kingdom of Saudi Arabia. Therefore, Riyadh dictates how the pilgrimage is run and who may attend. The Kingdom claims they distribute visas to attend the Hajj in accordance with the size of each country’s Muslim population. In reality, the allotments are not always transparent and the Saudis have been known to use visas as political pawns. Nations with whom they have favorable diplomatic ties with often receive extra bonus visas unofficially, and those with whom they do not, have issues attaining any visas at all. For example Syrians, with whom the Saudis cut diplomatic ties with in 2012, cannot obtain a Hajj visa through the government of Syrian President Bashar al-Assad – they must go through the Syrian National Coalition, a Saudi aligned opposing political party. Similarly, after the embargo placed on Qatar in 2017 the visas allotted to Qatar were halted, resulting in extreme backlash and a formal complaint to the UN. It was not until the intervention of Sheikh Abdullah Al Thani, an exiled member of the Qatari royal family, that the visas were once again granted. In both cases, the Saudi government used the visas as political leverage to undercut the authority of existing governments and give preferential treatment to their allies.

The most overt politicization of the Hajj though, has been the Saudi-Iranian cold war. Both countries use the Hajj as a battleground for promoting their competing versions of Islam, a tension which has erupted in violence on several occasions. In 1987, 402 Iranian pilgrims were killed and 600 more were injured by Saudi riot police as they protested “Death to America! Death to Israel!” during the Hajj. More recently, 464 Iranian pilgrims were killed in a tragic stampede during the Hajj. The following year, the Iranian government banned its citizens from attending the sacred rite, and since have been vocal in their dissatisfaction with Saudi management.

However the Iranians are far from the only ones to call Saudi stewardship into question. A growing number of critics have emerged due not only to the aforementioned political exploitation, but the Saudi’s growing and projected profiteering practices. The Saudi economy benefits immensely from the Hajj. The religious pilgrimage accounts for seven percent of Saudi Arabia’s GDP and 20 percent of it’s non-petrol GDP. Consequently, expanding the Hajj to accommodate more people, more businesses, and more profit has become an integral part of Mohammed Bin Salman’s economic plan for the Kingdom, Vision 2030. New hotels, shopping centers, fast trains, and airport terminals are all being constructed in anticipation of future pilgrimage, and nothing is too sacred to renovate. Even the Masjid al-Haram Mosque, which contains the Kaaba, is being expanded to accommodate as many as 1.85 million pilgrims at once in the years to come.

At first glance, these developments appear to be positive. Mecca’s growth does mean more people will have the opportunity to attend the Hajj and fulfill their religious duty. However the Saudi’s disheartening economic focus, that will entail the expansion of the tourism sector, and destruction of historic sights, negates any praise or admiration they may receive.

The Kingdom hopes to increase the revenue from pilgrimage and subsequently spread the wealth through various sectors as a part of their larger tourism expansion scheme. They have started to offer an “Umrah Plus” visa (the Umrah is a pilgrimage at a non-Hajj time of year) which provides access to not only Mecca, but other religious sites across the country. This will increase sustainable development for their population, but feels disingenuous to the purpose of pilgrimage. To exacerbate their trend of capitalizing off Mecca further, the Saudis have attempted to provide ulterior motives for pilgrimage. Mark Allaf, manager of the Mecca Hilton said the hotel was “trying to introduce the concept of combining both the performance of Umrah and Hajj, and specifically Umrah, with a business event.” Many of the devout feel these distractions sully the pilgrimage.

Mirroring this shift in the purpose of the Hajj is the shift in the physical landscape of Mecca. In the process of construction and renovation of the city, the Saudis have destroyed ancient relics as well as medieval Ottoman structures, an action which the Turkish cultural minister condemned as “cultural vandalism” and a “war on legacy”. In defense of the Saudis, it is within the theology of Wahhabi Islam to destroy these sights as to prevent idolatrous practices, however it is ultimately unjust for the Saudis to take action that will affect everyone based on their unpopular interpretation of Islam. It is also a bit too convenient that the home of Khadijah, Mohammed’s wife, was replaced with bathrooms in the expansion of the mosque and the home of Abu Bakr, Mohammed’s successor, was replaced with an extremely profitable Hilton hotel. It is apparent that the Saudis care more for development and personal economic gain than preservation and reverence of a shared cultural and religious history. Perhaps it is time for a more open conversation about the Saudi’s mandate to Mecca.

Saudi Arabia’s history of political and economic exploitation of power, not to mention their condemnable human rights record, make them unfit to manage Mecca. However that brings about the question: who is? Because the problem goes far beyond the Saudis themselves, and we in the West must take our share of responsibility. Islam’s shiny new sixth pillar, western capitalism, is the direct result of decades of U.S. interventionism and soft power throughout the Middle East. It would thereby be the height of hypocrisy for us to condemn the Saudis for following in our footsteps, for bringing profit to the American corporations filling the malls of Mecca, but that doesn’t mean Muslim countries can not. It is only natural to sympathize with the Iranian pilgrims protesting US-Saudi relations during the Hajj, because cultural imperialism is a driving force of change in Mecca. After all, the city belongs to Iranian Muslims just as much as it does to the Saudis, or the other 1.8 billion Muslims on Earth; and if they’re angry that some pilgrims are sleeping on the street, and others in the Fairmont penthouse they’re not alone. Perhaps the Saudis should give some credence to these criticisms and consider incorporating their religion into their developments, their economy and their politics, rather than the other way around.