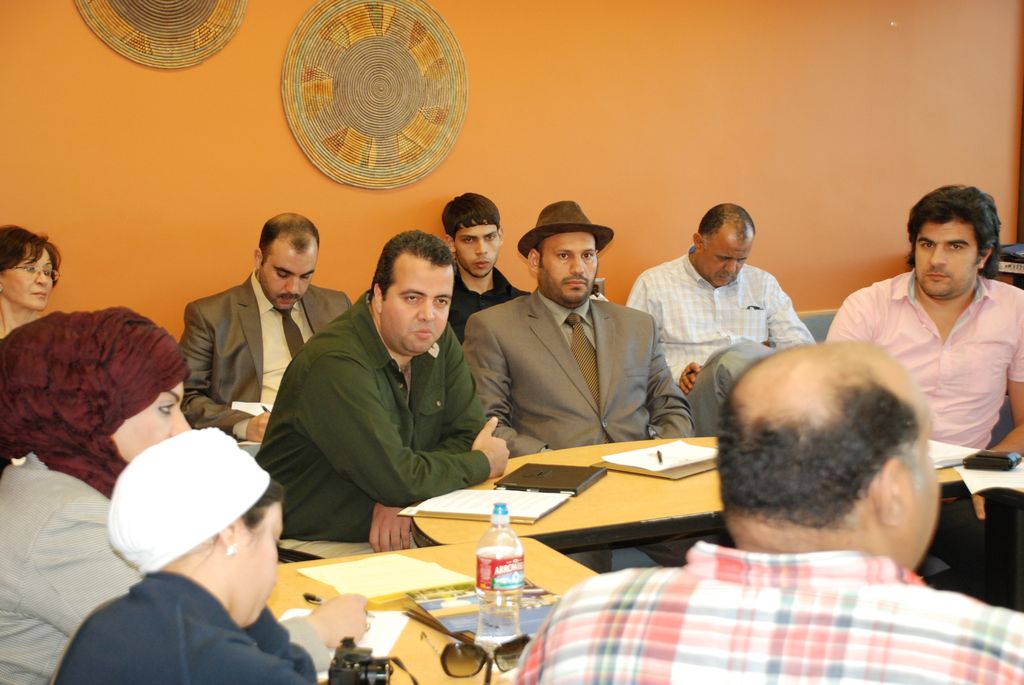 As news reports poured in everyday, detailing the fighting between Syrian rebel forces, the Israel and Palestine conflict, and the bloodshed, it all came to a screeching reality on November 5th. We had the privilege of interviewing 16 representatives of North African and Middle Eastern countries who were part of an international visitor leadership program sponsored by the U.S. Department of State. This was an eye-opening experience. As we listened to what the young political leaders and activists had to say, we were captivated. The room was filled with disagreements, a mixture of perspectives, and a palpable underlying energy. Rarely are representatives from these various countries together in one room, in a feeling of shared empathy.

Americans have long heard their leaders refer to the Middle East with rhetoric such as “bring our troops home” and the “war on terrorism.” Through these representations in the media, many Americans single out the Iraq and Afghanistan Wars and the September 11 attacks when thinking about the Middle East. Rarely do we evaluate the immense diversity and differential stances individual countries in the Middle East have with the United States and with each other. We listen to reports of what one leader said to another, or what foreign policy stance the U.S. will take, or the death toll of a revolution or war. But how often do we hear about how an event affects the people of these countries, what history they have with one another, and what that event will mean for them and their future?

This interview allowed us to realize the encapsulated and largely monolithic view we have of the Middle East. Contrary to the image of the Middle East that is plagued by violence and destruction, the 16 delegates focused on diplomacy, conflict settlements, peaceful processes, and methods of democracy to employ in the future. It also became apparent that the Arab world had been closely following U.S. politics and accurately understood Americans’ ignorance of the complexity of their region. As one Palestinian representative noted, “(The) greatest deception for Palestinians, generally Arabs, but at least for Palestinians is to know that foreign policy is not important inside America for elections. Because back home the U.S. is very present at all levels, whether it is at the internal politics or the regional politics.”

During the interview, we asked the representatives whether the outcome of the U.S. presidential election would make a difference in their country. The answers to this question alone surprised us, and they revealed insider perceptions regarding U.S. bipartisanship and leadership styles.

The Palestinian representative articulated the popular perception that party affiliation (Republican or Democrat) did not make a difference in foreign policy. Rather it was more about the “person and President Obama, when he came 4 years ago, [and] placed the bar very high” with his speech in Cairo. The representative also noted that many Palestinians have expressed “frustration now, coming out of that,” due to unaddressed promises and disappointed hopes.

In contrast, an Algerian representative stated that on a personal level, he wanted President Obama to win re-election because Algeria’s relationship with the U.S. “was based on combating terrorism and promoting human rights. President Obama is a symbol of how the United States went from slavery to having a black president.” The underlying preference in Algeria was for President Obama to be re-elected; however, for reasons that many Americans probably never consider, including Obama’s African heritage. They also considered his promises of peace and diplomacy as important factors.

The Moroccan participant expressed his view quite differently, stating that the country had “an excellent historical relationship with the United States of America, with both parties—Republicans and Democrats. Morocco was the first country in the world to accept the United States as a country when it was first established.” It was unexpected and surprising to hear a representative base the country’s relationship with the U.S. on a historical fact unknown to many Americans. Our ignorance of such important information then poses a question: how many other facts and issues – that we are unaware of – are presently impacting our relationships with other countries?

Listening to the delegation, we were struck by the diversity of lenses employed by these different countries in their assessment of the United States. The unique cultures, varying issues, and different political systems with fluctuating degrees of freedoms could not be summed up by the simple term the “Arab world,” a term so liberally used by the western media. The unique history and cultural environments caused individual countries in Middle East to react and participate differently in response to the Arab Spring and other recent events. Therefore, when a country such as ours intervenes in internal affairs of Middle Eastern countries, have we stressed the need for differentiated U.S. policy approached in the region and the repercussions of not doing so? What would the image we project in these countries and how would our relations with them change? For instance, the United States has historically supported civilian protests for greater democracy. However, even though these countries with protests and revolutions may gain greater freedom, the representatives highlighted that this was not the case for some of the neighboring countries.

A Lebanese representative stated that, “There was a lot of security and political pressure and oppression and those people that the U.S. supported (came) into power…Before these revolutions, we had political and security oppression but now after we have political, security, and also religious oppression.” Another representative from Saudi Arabia also highlighted an unforeseen development that, “oppression has become more severe and armed than before. People are using weapons. Maybe they are afraid that the revolution in Bahrain will happen in Saudi Arabia.”  The oppression even extends to individuals who are taken in “custody because of their opinions, not political opinions, their regular opinions.”

Moreover, what is even more striking is the lack of U.S. response to the oppression. How can a country that prides itself on expanding individual freedoms possibly permit an ally such as Saudi Arabia to suppress the freedom of its citizens? If the U.S. promotes freedom and peace within its own borders, it should use foreign policy as a tool to employ these ideals beyond its borders as well.

While it became clear that the “one size fits all” view does not describe the Arab world, the interview also helped us understand the role U.S. foreign policy plays in creating the “American” image in the Middle East. The American media, scholarly articles, and public opinion polls have all established that the U.S. is not gaining popular support in the region. Yet, listening to the representatives shed light on how our foreign policy has created this negative trend, forced us to view our foreign policy priorities in a new perspective. While U.S. policies have ranged from providing humanitarian aid to engaging in full-scale war, the people of the Arab world, not surprisingly, are most affected by the indirect costs that war has imposed on them. These costs range from the increase violent political oppression to decreases in freedom of speech.

The impact is that these unanticipated costs hinder the facilitation of conflict settlements and dialogue among the people of these countries, resulting in a negative portrayal of America. Even though our intentions are good, they are often lost in the damage and destruction that can be a byproduct of U.S. foreign policy. Civilians experience both emotional and physical pain, livelihoods are destroyed, and the American image is reduced to that of a destroyer or occupier. It comes as no surprise that when discussing the policies of the American president, there was a clear preference for the diplomacy of Obama over the war-oriented policies employed under the Bush Administration as well as Romney’s proposed foreign policy.

What struck us as interesting was that the representatives were very comfortable with assigning a black and white ideological distinction between the two candidates. As politically conscious individuals living in the U.S., we perhaps do not see our policies in such a dichotomous manner. As a delegate from Morocco pointed out, Obama’s diplomacy is “very calm and reassuring to the people in that region and it also calls for having dialogue.” Diplomacy is not only a more important and tactical action, but it also resonates well across the region and this would strengthen U.S.-Arab relations. Thus, it is vital to remember that a nuanced assessment, by Americans, of policies employed overseas can give us great insight into how the U.S. image is constructed in the Arab world.

The Palestinian delegate shared this sentiment in his discussion of U.S. policy towards Israel and Palestine. He remarked that Obama’s “present[ing] himself as promoting dialogue over war” is a driving force in the Palestinian people’s support for Obama. He strongly believed that “if you want to see a peaceful political process between Palestinians and Israelis…it would be [in] our interest if President Obama gets re-elected.” Once again, there is obvious support for a leader associated with “peace” and a “peace settlement” processes.

When understanding how diplomacy and war in the Arab world shape the image of America, the U.S. should keep the following in mind: the Moroccan representative pointed out that under the presidencies of “George Bush Jr. and George Bush Senior…they tried to resolve many of the problems around the world with the language of war and not the language of peace.” This one statement resonated in the room, among the representatives and among the three of us. Although it is easier said than done, what the U.S. government needs to do in order to ensure the success of American foreign policy is to actively pursue peace. “The language of peace” will allow the American government and population to win the “hearts and minds” of the Arab people, and to achieve its greater goals in the region. With Obama’s reelection, the President now has another chance to utilize “the language of peace” through changes in U.S. foreign policy. As these policies continue to affect the Arab people’s lives, they will remember Obama’s promises and watch for developments that can restore relations between our two worlds. However, until American policymakers adopt this stand and actively uphold their promises, it is unlikely that the U.S. can succeed in its campaigns to win the support of the Arab population or improve the “American” image around the world.

On a more personal level, discussing these questions with the delegation gave us a more nuanced understanding of countries in the North African and Middle East region. Just as the participants had a different experience upon interacting with Americans during their trip to the U.S., during which they realized that their views of Americans were incorrect, our prior views of political activists in the Arab world changed. This firsthand experience provided us with a set of views that are often buried in the media, but speak more truth on how each individual is affected by and deserves to be differentiated in U.S. foreign policy. It was an insightful conversation that has already affected the way we understand and interpret the Arab world in various contexts—in the media, in politics, and in the classroom.

Tina Kim, Trisha Parikh, and Sara Pilgreen are co-editors and writers for The Generation.